by Bukola Idowu
in Feature
0 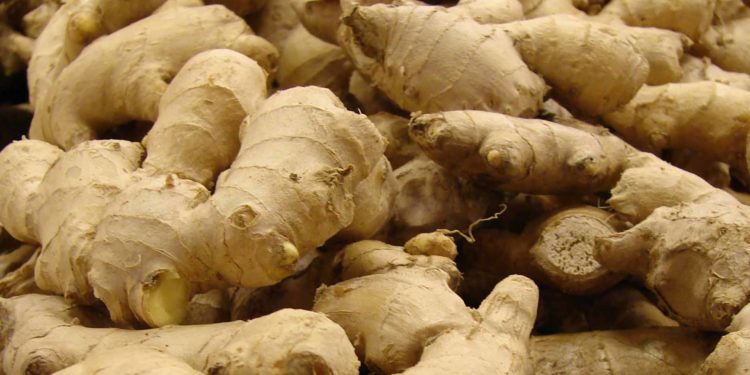 Last year, Nigeria exported ginger, either whole, dried or ground worth over N12 billion according to trade statistics released by the National Bureau of Statistics (NBS). Despite this, the country as one of the largest producers of ginger is yet to optimize the comparative advantage of the product.

Ginger (zingiber officinale) is an herbal flowering plant whose rhizome is widely used as a spice or a medicine. It is a perennial plant belonging to the Zingiberaceae family of which turmeric is also a member.

The product which is now cultivated across the states in Nigeria has become an important export item fetching the much needed foreign exchange for the country. At the global market, ginger is valued for its powder, oil and oleoresin.

Ginger in its whole form or extract is used not only in the global cuisine industry but also in pharmaceutical and beauty industries and because majority of the ginger farmed in Nigeria is organic it is always in high demand.

Commonly found in Kaduna, Bauchi, Benue, Gombe and Nasarawa states, Nigeria’s ginger production is put at 31 million metric tons while demand is put at 65 million MT, leaving a supply-demand gap of 34 million MT, according to data from the Ministry of Agriculture.

The country exports majority of its ginger which makes Nigeria the third highest exporter of the crop globally. It is usually exported in the fresh form, the dried form and the processed form which is the powdered ginger. The commodity is so popular owing to its numbers uses. Some of them are herbal medicines, spices of bread in bakeries, and its uses in breweries to produce drinks among others.

In the Nigerian market, ginger is not only popular, it is a very high demand crop commodity. At a time when the government is implementing various measures to boost the agricultural sector, experts say this has provided entrepreneurs with a platform to key into the economic diversification policy of the government.
Globally, the Nigerian ginger is most preferred as it is known for being particularly potent and high in oleoresin, which is good for use in both food and certain pharmaceuticals. The demand for Nigerian ginger is about twice what is currently being produced so there is a lot of room for increased production particularly for export
Nigeria’s biggest markets are South Africa, India, and Morocco, where it is sold directly to domestic food processors, and Dubai, where farmers mainly sell to international traders. Experts say the Nigerian ginger is highly regarded in the international market for its quality and highly medicinal value. Specifically, its aroma, purgency and high oil and Aleoresin content are other distinct features of ginger products from Nigeria.
With the several agriculture oriented and export promotion policies of the government, ginger farming for export is an area that is in need of investors. However, in going into ginger farming, there are measures to consider for a profitable harvest.
Often ginger is planted with other crops that could provide shelter as it doesn’t thrive well under direct sunlight. It also needs sufficient water, so water must be available in the environment your ginger farm is located. Manual watering can also provide water for your ginger plant.
Planting your ginger with some other plants such as peas and beans can easily provide the adequate amount of sunlight, as these plants can help in shading it from direct sunlight. Also, ginger rhizomes thrive in loose, rich and moist soil. It also loves mildly acidic soil with a pH of 5.5 to 6.5. Loamy soil is the perfect soil for ginger farming. It also drains water which prevents the ginger plants from becoming water logged.
Cultivating ginger constantly in the same piece of land may cause low production. It is advised that after 2-3 years of frequent farming, one year break should be given to the farmland. Using organic compost will also be helpful.
Also, when planting ginger rhizomes, consider some good companions for ginger that will provide weed cover, insect repellent and natural mulch. Legumes like Peas, Chili peppers and Turmeric are especially useful as they fix nitrogen in soil for better overall plant growth.
Finally, make sure any ginger plant companions share the same growth needs as this would ensure the success of your ginger plant. The harvesting of ginger in Nigeria usually starts in October and runs all through to may. Harvesting time of ginger should be after eight to 10 months of planting.
However, if you want fresh ginger that will be used for vegetable purpose, it should be harvested after six months. Fully matured ginger has yellow leaves and dry pseudo stems. Ginger rhizomes are lifted with a digging fork or a spade. They are then cleaned of soil particles and roots.
Ginger can be stored in the fresh state or dried state. The fresh ones should be stored in a cold environment in between 10 to 15 degrees centigrade while for the dried product, it is first cleaned thoroughly with fresh water before being cut into slices to aid faster drying.
After drying, the dried ginger can either be stored as it is, or grounded into powdered form. It can be stored in either bags, glass or tin containers.

Tales Of Woe As Flood Kills 7, Displaces Thousands In Kwara