There was jubilation recently by the residents of Kumbiya-Kumbiya ward in the Gombe state capital after Governor Inuwa Yahaya brought succour to the community by building the first school ever in the area. NAJIB SANI writes on this ultra modern school which is one of the best in the country. 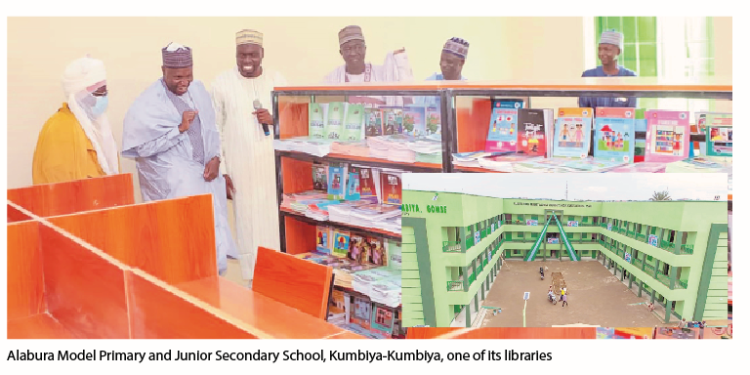 Kumbiya-Kumbiya is the only ward in Gombe state that lacked a single public school either nursery, primary or secondary. All other 113 wards of the state including those in remote villages have at least a public primary school.

However, despite its location within Gombe state capital, Kumbiya-Kumbiya was sidelined by successive governments since the creation of Gombe state in terms of construction of school.

Many wards in the state have both public primary and secondary schools even as some have more than one where their children are being enrolled with the exception of Kumbiya-Kumbiya, the matter some residents ascribed to their ‘bad luck’.

LEADERSHIP gathered that children from the community had to trek a far distance or be taken by their parents up to Bolari community to attend school. The situation that was not only unpleasant to the community children but the parents that had to pay transportation fares or shoulder the responsibility of conveying the children to and from other schools on daily basis.

A community member Fatima Ibrahim Mukhtar narrated that the community had no single school before and at present lacks a ‘Jumma’at mosque (Friday mosque) pointing out that it is the only area facing the problem in the entire town.

She expressed dismay that this happened even though the area is situated inside the metropolis opining that the situation was their own misfortune.

However, Governor Inuwa Yahaya had brought succour to the community recently by building a primary and junior secondary school for the area to make the residents feel equal with all other wards and enable their children to have access to school without going out elsewhere.

What is more interesting is that, the governor did not only build school for the Kumbiya-kumbiya community, but built a very befitting and one of the most magnificent schools in the nation.

The new school elicited comments and encomiums to the state governor not only from the state but some parts of the nation because of its beauty and the fact that it was provided for a local community inhabited mostly by low income earners.

Inuwa constructed the new ultra modern primary and junior secondary school in response to the long term yearnings of Kumbiya-Kumbiya community. It was commissioned two weeks ago in a colourful ceremony attended by teeming members of the community and traditional rulers.

The school was named Alabura Model Primary and Junior Secondary School after a renowned educationist late Malam Alabura who lived in the ward.

The commissioning of the two storey twin complex which has been trending on social media brought to an end the unpleasant history of the Kumbiya-Kumbiya community as the only ward without government learning facility in the entire state.

It is an edifice of 36 classrooms, two offices, two staff rooms and two computer rooms and libraries. In addition, the school has various sporting facilities to enhance academic and extra curricular activities for the pupils and students.

At the commissioning ceremony, Governor Inuwa stated that the construction of the ultra modern school was borne out of his compassion to the plight of the community.

“By providence, the foundation of this school was laid on 12th June 2021 and it is being commissioned in exactly a year”. He said.

Governor Inuwa Yahaya recalled that since coming into office, his administration was confronted with the problems of high number of out of school children, dilapidated structures and facilities in primary and secondary schools.

“We were able to improve on enrolment figures significantly, renovated more than 400 classrooms and constructed over 200 new ones”. He noted.

Recall that he recently approved the employment of 1,000 teachers through the Gombe State Teachers Service Commission to boost the human resource capacity in schools.

While commending the consultants and contractors during the commissioning of the school for job well done, Governor Inuwa appealed to the school management, teachers and the community to ensure that the school and its facilities are well maintained at all times.

Commenting on the development, Ahmed Adamu Yarma, Chairman of Kumbiya-Kumbiya Community, expressed gratitude to the governor for giving them a sense of belonging by extending dividends of government to the area.

Also in an interview with LEADERSHIP, family of late Malam Alabura appreciated Inuwa for naming such an important school after their father.

One of the biological children of late Alabura, Malam Salisu Alabura said the posthumous honour done to their father in remembrance of his contributions to the development of education in Gombe state would forever remain fresh in their minds.

Other citizens urged the government and the school management to admit pupils and students in the newly built model school base on merit not favoritism and godfatherism.

Umar Abubakar said since the governor has constructed the school in response to the yearning and aspiration of Kumbiya-kumbiya community, children of the area should be given priority during admission.

He also advised that children of the poor should be considered during enrollment so that the aim of establishing the school which is to enable the children of the less privileged get access to quality education would not be defeated.

Moreso, another citizen Rilwanu Shehu has this to say ” Although I belong to the opposition, I must confess that the governor has tried. But the school will be of less important if there are no competent teachers. I advised that competent and qualified teachers should be posted to the school”. He suggested.

Our correspondent reports that the state government had set up a high powered committee to supervise the activities of the school and ensure academic excellence among pupils and students.

The governor last year also provided a functional primary health care centre in the ward which hitherto was lacking. By these, the community will forever remember Inuwa as the first governor in the history of the state to provide them with first school and functional health facility like other wards after years of forgetfulness by past administrations. It is noteworthy that the governor made available one primary health centre in each of the 114 wards of the state.

No doubt, every citizen needs equity, fairness and justice from their leaders and Governor Inuwa has proven to be a perfect example of a leader guided by such principles.

How To Stay Out Of Trouble