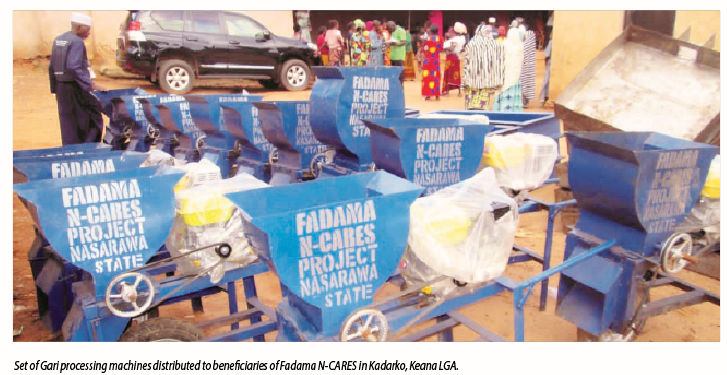 The fourth democratically elected  governor of Nasarawa State, during his inauguration speech on May 29th, 2019, described agriculture  as the mainstay of the economy of Nasarawa State, with 80% of the population engaged in farming, promised to  improve the daunting challenges that bedeviled the sector as he avowed  that boosting agriculture remains part of his administration’s agenda to encourage commercial agriculture in the area of comparative advantage and boost up value addition to crops by laying solid foundation for agro allied industries.

Engineer Abdullahi Sule maintained that he will work with interested investors to drive the sector to diverse level of growth, by providing farming inputs such as fertiliser, improved seedlings, as well as agro-chemicals and will be distributed promptly to the end users.

The governor further added that his government will accord utmost precedence to mechanised agriculture. He reiterated the expectation of farmers with his commitment to reposition the Nasarawa State Agricultural Development Programme  (NADP) adequately through prompt funding for effective actualisation of it’s nandate.

“The research capacities of the Faculty of Agriculture, Nasarawa State University, Keffi (NSUK), as well as the State College of Agriculture, Science and Technology, Lafia (COAST), the change in the nomenclature of the then College of Agriculture, Lafia is a decision that has added value to one of the backward institution which was operating as a monothecnic,having few courses of studies and without any intervention from the Tertiary Education Trust Funds (TETFUND), remained stunted for years as most of the dilapidated structures found are those inherited from the then defunt Plateau State.

To set the ball rolling, the incumbent administration in the agricultural sector succeeded  in breaking the jinx of late sales of fertiliser to farmers in the month of August and September and embarked on early sales of fertiliser before the commencement of wet season. This has been adopted by the governor for the three rainy seasons in the life of his administration as fertiliser and other farming inputs are sold at a subsidised price. And not only that, but sold as early as  in the month of April not when fertilisers are sold between August for wet season.

An extra measure taken by the Shendam Road Government House landlord, was to block leakages in the diversion of fertiliser by government officials. He also delisted top government functionaries from benefiting from allocation of the commodity. The governor, to match words with action, procured 33,000 metric tons of fertiliser and 50,090 metric tons of other agrcultural inputs such as lime,and potash and sold at a subsidised price to end users.

Frantic efforts were made by the administration under the watch of the state governor to access credit facilities to the tune of N1.5bn from NIRSAL, a collaborative effort between the apex bank, the Central Bank of Nigeria (CBN) and the Nasarawa State Government with the sole aim to enable youth set up a small scale agricultural and trading enterprise.

The current administration also facilitated the coming of Dangote sugar company to invest in Tunga community of Awe local government area of the state, and Doma local government to invest in sugar cane plantation and in the other hand, encourage the expansion of Olam Rice farm in Rukubi, all expected to boost food sufficiency in the state.

Engineer Abdullahi Sule’s government, to consolidate on Farin Ruwa dam project,a project conceived by the then administration, an accord was signed between the Federal and State Government, with the Nasarawa State Government making an obligation to partner the Lower Benue River Basin Development Authority (LBRBDA), to boost agriculture through the resuscitation of Doma Dam as well make an exceptional effort by inaugurating an automated agro processing company NEWPAL, Nigeria Limited at Keffi in July 2000.

It is worthy to extol the state governor, Engineer Abdullahi Sule, with his historic steps to subdue the annual mayhem between Fulani herders and farmers in the “Home of Solid Minerals”, which no doubt was one of the major constraints hampering food production in the state. It is no longer news that Fulani herders/farmers skirmishes, a spillover crisis from neighbouring Benue and Nasarawa  states and communal conflicts in the border towns have been given more attention with the inauguration of a committee to  identify the true border and beacons between the two sisters states.

The governor was prompt in paying his counterpart funds to the tune of N88,000,000 million, International Fund for Agricultural Development (IFAD),a specialised agency of the United Nations meant at reducing poverty and hunger in the state. Other moves by the governor to improve high yield was the construction of over 1000 feeder roads in our rural areas with the sole aimed of linking communities to some hard to reach settlements, as well as to ease the transportation of farm produce to markets.

The Shendam Road landlord desirous to bring about accelerated development, particularly in the agricultural sector, had entered into partnership with Africa Union Development Agency (AUDA), and the New Partnership for African Development to ensure high yield as well as bring about food sufficiency. The partnership has been extended to the exploration and extraction of solid minerals, small holder farmers programme.

The new policies and programme injected into the agricultural sector, was the introduction of Fadama N-CARES (Nasarawa State COVID-19 Action Recovery And Economic Stimulus) this programme was a replicate of federal government NG-CARES, which over 3000 farmers who were affected during the COVID-19 pandemic, were captured as beneficiaries of the hands of fellowship. Following the nationwide lockdown, the Nasarawa State Government did not relent by introducing the people oriented programme that has direct impact on the lives of farmers.

The Fadama N-CARES programme was meant to cushion the effect of coronavirus pandemic, no fewer than 50 farmers in Toto local government council of the state benefited from the distribution of four rams and goats, which was part of the state government’s effort to addressing the level of poverty amongst farmers. Each farmer was given three female rams with one male as well as goat respectively. Other beneficiaries got an intervention of farm inputs ranging from fertiliser, herbicide and improved seedlings ranging from Faro 44 rice,TME and Pro vitamin cassava known as 419 variety with Maize which are disease and drought resistant.

The state coordinator, Abdullahi Mohammed Mairiga gave the hint during another round of exercise, saying farmers group in Kadarko in Keana local government got an intervention of Fadama-N-CARES which was a Nasarawa State programme, he further added that other categories got garri processing machines which he said were disbursed to the beneficiaries free of charge.

In the three years of Engineer Abdullahi Sule, the agricultural sector has witnessed a momentous Journey, vis a vis the policies geared towards enhancing agriculture which is one of the sectors that is cheap employer of labour. Alas the eagerness of the current administration can be ascertained through the massive support the state government is providing to the Ministry of Agriculture and Water Resources. In the last three years, the State Government ensured that there is easy access of small holder farmers to subsidised, improved farm inputs and provision of machinery with back up of extension service delivery, to attract investors as well as to promote agricultural mechanisation to reduce drudgery.

Governor Abdullahi Sule’s administration also accord utmost importance to irrigation farming by ensuring that fertiliser and other inputs are made available to end users at the  appropriate time. The governor did not hesitate to approve the counterpart fund for the implemention of FGN/IFAD Assistant Value Chain Development Programme (VCDP), as well as the approval of funds for participation at the national council of water resources. The governor is committed to the prompt release of overhead to Rural Water Supply and Sanitation and the renovation of seven veterinary clinics as well as flag-off of Rural Access and Agricultural Marketing Project (RAAMP) 966Km for the construction of rural roads.

While in the area of water resources, the commissioner, Nuhu Ibrahim Oshafu said the State Government is making a move to address water scarcity in some towns with water problem.

How To Stay Out Of Trouble