Joshua Dada, writes that the contest for the governorship seat in Osun State is laced with lots of intra-party intrigues. 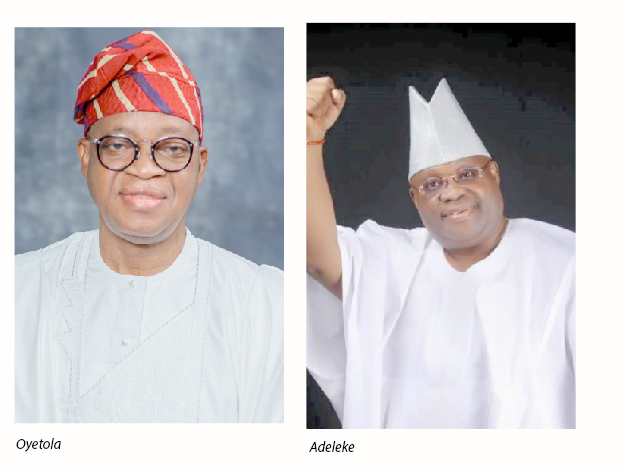 With the Ekiti State governorship election won and lost, the attention of Nigerians, as far as elections are concerned, is now on the July 16, 2022 gubernatorial election in Osun State.

No doubt, stakeholders in election matters in the country have learned a thing or two from the just concluded electoral process in Ekiti State.

The Independent National Electoral Commission (INEC) implemented some of the new technology like electronic transmission of results, improved on the BVAS system and handled logistics much better, according to the civil society organisations that monitored the polls.

Though pundits believed that the election was militarised considering the number of security operatives drafted to the state, the Ekiti polls was relatively less violent.

A sore point in the election is the wanton vote-buying that characterised the polls.

However, the factors that led to and determined the emergence of winners and losers alike in Ekiti State might not be significantly different from the Osun scenario.

In Osun, according to the Independent National Electoral Commission, 15 political parties will slug it out for the Bola Ige White House, home of governance in the state on July, 16, 2022.

The two dominant political parties, the All Progressives Congress (APC) and the Peoples Democratic Party (PDP) like in most states of the federation are the leading contenders.

However, two other parties, the Accord Party (AP)  and the Labour Party, (LP) would also make significant impacts if they work assiduously towards realising their ultimate goal.

The gubernatorial flagbearer of the Accord Party, Dr. Akin Ogunbiyi defected from the major opposition PDP on grounds of marginalisation.

Ogunbiyi had contested against the PDP candidate, Senator Ademola Adeleke, at the 2018 governorship primary of the party.

Having realised that he could not have his way in PDP this time around, he quickly opted out and joined the Accord Party where he got the ticket to run for the governorship race.

He has embarked on wide consultations across the state. Besides, as a philanthropist, he has impacted the lives of people at various levels. He will also leverage on his emergence from Osun West senatorial district which is angling for the governorship seat. But whether or not he can make it to Bola Ige House, considering concerns that his party does not have a solid structure on ground, is another matter. But the Osun electorate will decide.

The former deputy speaker patiently participated in the APC direct primary election and lost before switching to Labour Party high was searching for a credible and formidable politician as candidate at the time.

Having emerged as the Labour Party candidate, Yusuf has made a significant impact on the profile of his new party by virtue of his status as a former deputy Speaker.

Like other candidates, Yussuff has embarked on consultations across the state, he will be leveraging on his status as a former deputy Speaker of the House of Representatives.

However, how his shortfall in terms of having a solid and wide political structure would impact his performance at the polls would be decided by Osun electorates come July 16.

The PDP candidate, Senator Ademola Adeleke nearly sent APC parking out of the government house at the 2018 governorship election.

Recall that the incumbent governor, Adegboyega Oyetola emerged the governor of the election with less than a thousand votes more than that of Adeleke’s.

The events that led to who eventually became governor is now history for another day.

However, has what led to Adeleke’s failure in the last election changed? While some of the factors such as catalogues of litigations, educational eligibility among others have changed, other burdens remained prevalent.

However he has been embarking on consultations with stakeholders across the state just as his campaign trail is ongoing.

He may leverage on sympathy votes by Osun electorate who believed he was cheated in the 2018 governorship election.

However, the party on whose platform he wanted to be elected remained fractionalised.

For this party to make a smooth sail to the government house in Osun, a lot of fence-mending has to be mended. The founding fathers of the party in the state are kept at bay till now.

Chieftains of the party in the state such as Alhaji Shuaib Oyedokun, a former PDP BoT member, former governor of the state, Prince Olagunsoye Oyinlola, former deputy governor, Erelu Olusola Obada, Senator Olu Alabi and a host of others are not on the campaign trail of PDP.

If these caliber of politicians can be jettisoned despite their considered weight, experience, and influence, time will tell if Adeleke can pull through the election without mending the broken fence in his party.

Nevertheless, he has deep pockets, a war chest that can prosecute the election in the state. What’s more, he is likely to benefit from the long quest for the seat of governance by the Osun West senatorial district where he hails from. And his improved academic profile may play to his advantage, considering that it was a major campaign issue against him in the last election.

The APC candidate, Mr Adegboyega Oyetola, is the incumbent who has consolidated political power in the last four years he has been in office. Even though he narrowly won the election, thanks to the then candidate of Social Democratic Party (SDP) Senator Iyiola Omisore, who is now national secretary of APC.

Still, Oyetola would have to battle with possible moles and aggrieved politicians within the APC in the course of the election.

So far, loyalists of the minister of Interior, Ogbeni Aregbesola under the aegis of The Osun Progressives (TOP) are not featuring in Oyetola’s campaign. They have been aggrieved at the way their political leader was treated by the governor, such that a series of interventionist moves by some party stakeholders failed to achieve results.

Apart from a few TOP members that have opted for other parties, the bulk of the members remained in the ruling APC with their patron, Ogbeni Rauf Adesoji Aregbesola.

The absence of Aregbesola’s name on the long list of the National Council for Osun election campaign indicates that all might still not be well.

As it stands, the song on the lips of Aregbesola loyalists is that Oyetola will not be the next governor of Osun State. Perhaps this notion is drawn from a belief that the litigation instituted by their gubernatorial aspirant during the primary election, Alhaji Moshood Adeoti would work against the candidacy of Oyetola.

However, Oyetola’s profile has improved drastically compared to the status of 2018 even with the solid support of his predecessor then.

He has to his advantage the power of incumbency with formidable structure across the state. Also he would enjoy federal might as the security apparatus would be more susceptible to him.

Besides, having access to financial resources, he has significantly delivered on his campaign promises to the people of the state, his supporters would argue.

As Osun the electorate warm up to cast their votes for their preferred candidates come July 16, 2022, they should realise that all eyes are on them and their choice will determine their fortune in another four years.

“After all is said and done, the quality of elections provided by the electoral umpire will be key to the whole process. As such the hope is that the commission will replicate the good things it did in Ekiti and likewise improve on the shortfalls. Politicians will be politicians, as long as the umpire and security agencies do their work and remain partisan, the winner at the end of the day should be the electorate who would have voted whom he or she believes can serve the state better,” public affairs analysts, Mike Obiekwe stated.