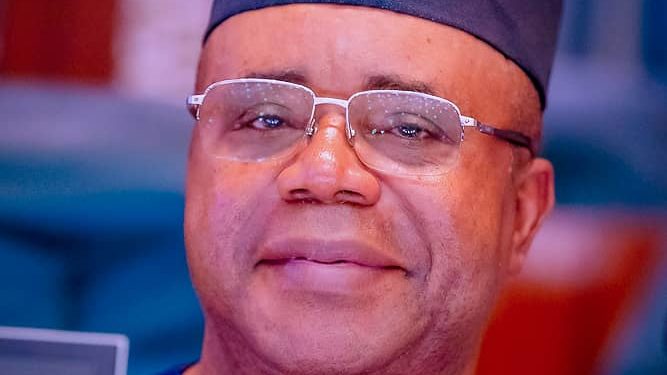 With the appointment of Obong Umana Okon Umana, technocrat and financial expert, as the new Minister of Niger Delta Affairs, the Niger Delta Elders’ Forum (NDEF), has re-emphasised that “it is now apposite to state that it is time to right the wrongs done to the region in the past three years of Godswill Akpabio’s tenure by inaugurating the substantive Board of the NDDC, an action that will be in compliance with the law setting up the Commission, the NDDC Act.”

In a statement by its National President, Chief Tonye Ogbogbula, the group which also thanked President Muhammadu Buhari for “appointing this distinguished Niger Delta patriot to the exalted position,” reminded President Buhari, Umana, and the Federal Government of what it described as “three years of the inglorious tenure of Chief Godswill Akpabio that practically blighted the entire region,” and thereby aligned with “authentic stakeholders who have consistently demanded that the NDDC Act should be complied with in the governance of the Commission during and after the period of the much touted forensic audit.”

According to NDEF, “it is illegal to have contraptions of interim management committees / sole administrator to begin to administer the NDDC and arbitrarily utilise the monthly sums due to the NDDC.”

The group expressed its gladness that the new Minister of Niger Delta Affairs, Obong Umana, has promised to “meet the yearnings of the people of the Niger Delta for development.” Umana, who spoke during a brief meeting with staff of the ministry, after his inauguration by President Buhari said that “together we can create the necessary impact and make the difference for the people of Nigeria and the Niger Delta.”

The group also recalled that Senator Akpabio as supervising Minister of the NDDC, “through an official memo in 2019 recommended the suspension of the inauguration of the substantive Board, which President Buhari had appointed, and which was confirmed by the Senate in November of 2019. Akpabio further recommended to the President the running of NDDC with illegal interim management/sole administrator contraptions until the completion of the forensic audit, contrary to the provisions of NDDC Act. That illegal interim management/sole administrator contraption has been administering NDDC since October 2019, in contravention of the law, and negates fair and equitable representation which a board guarantees and which ensures proper governance, accountability, equity and fairness to the nine constituent states.”

According to NDEF, “the continued illegality of the interim management committees/sole administrator contraptions which the former Minister of Niger Delta Affairs foisted on NDDC since October 2019 in breach of the NDDC Act is a national embarrassment that should be of grave concern to President Buhari, most especially for his legacy when he leaves office in May 2023.” Ogbogula noted that for a President who stated in October 2019 when he received in audience the governors of the nine constituent states of the NDDC that “I try to follow the Act setting up these institutions,” there is no better time than now, when he has appointed a new supervisory Minister of NDDC, “to end the illegality of further administering NDDC with a Sole Administrator which is in breach of NDDC Act – the law setting-up the Commission.”

However, the Forensic audit report has been submitted to President Muhammadu Buhari ten months ago since September 2, 2021 prompting the Ijaw National Congress to caution that the “delay in the inauguration of the NDDC Board is a clear betrayal of trust and display of state insensitivity on Ijaw nation and Niger Delta region.”

NDEF noted that the “situation currently in NDDC which has subsisted for over two years is that there is an illegal sole administrator who is both Managing Director, Executive Director of Finance, and Executive Director Projects, in clear breach of NDDC Act which ensures separation of these duties to ensure checks and balances.”

The group restated that the “continued administration of the NDDC by a sole administrator is illegal because the NDDC Act has no provision for this illegality as the NDDC Act only provides that the Board and Management of the NDDC at any point in time should follow the provisions of the law which states that the Board and management is to be appointed by the President, subject to confirmation by the Senate. In effect, nobody is supposed to begin to administer the NDDC and utilise the huge funds accruing to it on a monthly basis without passing through this legal requirement as stipulated in the NDDC Act.”

According to Ogbogbula, “whereas the North East Development Commission (NEDC) is operating in line with its Governing Act with a Governing Board and duly constituted Management in place, conversely in the Niger Delta the NDDC Act is being breached and flagrantly flouted for an illegal sole administrator to operate and administer its funds arbitrarily even after President Buhari had appointed a Board for the NDDC which was duly confirmed by the Nigerian Senate in November 2019, but was asked to be on standby for inauguration after the forensic audit.”

The group stated that in the last two years and ten months, “under the cover of conducting a forensic audit, the huge funds due to the NDDC has been frittered and this period has witnessed some of the most brazen incidences of corruption, fraud, financial recklessness, extra-budgetary spending and gross mismanagement of several billions of naira, with very little to show for it.”

NDEF noted that under the “illegal interim managements/sole administrator contraptions, the combined two-year budgets for 2019 and 2020, as approved by the National Assembly was N799 Billion.” Yet, as pointed out by Professor Benjamin Okaba, President of Ijaw National Congress (INC), under the interim management/sole administrator contraptions, “over N600bn payments have been made for emergency contracts without due process; the 2020 budget was passed in December and N400bn was voted for the NDDC but the commission had spent over N190bn before the budget was passed, thereby violating the Procurement Act.”

NDEF also recalled the Senate probe of NDDC Interim Management Committee (IMC) in June/July of 2020 which revealed how the IMC “blew N81.5 billion in just a couple of months on fictitious contracts, frivolities, and in breach of extant financial and public procurement laws. The Senate therefore recommended that the IMC should refund the sum of N4.923 Billion to the Federation Account, and that the IMC should be disbanded, while the substantive board should be inaugurated to manage the Commission in accordance with the law.”

Ogbogbula restated that Niger Deltans have consistently condemned the “continued desecration of the NDDC Act, which makes clear provisions for the appointment of its management and Governing Board.” According to the group, under the NDDC Act, each of the nine constituent states – Abia, Akwa Ibom, Bayelsa, Cross River, Delta, Edo, Imo, Ondo, and Rivers – has a representative on the board. In addition, there is a representative of oil producing companies, all of whom are part time directors. The executive management has a Managing Director and two Executive Directors, who are the only full-time members of the Governing Board.

The group also noted that the “point has been made by Niger Delta stakeholders, and needs to be restated, that President Buhari needs to redeem himself now that the Forensic audit report has been submitted to him since September 2, 2021. The President should do well to heed the call of Niger Delta leaders, governors, youths, women, traditional rulers, civil society organisations, and other stakeholders, comply with the law setting up NDDC, and also fulfill his own promise of June 24, 2021, and inaugurate the board to manage the Commission for the benefit of the people of the nine Niger Delta States.”

NDEF recalled that recently, in a letter to President Buhari and the APC National leadership, an APC group, “Committed members of the APC from the Niger Delta Region,” whose letter was signed by the trio of Ebibomo Akpoebide, Menegbo Nwinuamene, and Itam Edem, specifically cautioned that “as it stands, the APC cannot win an election in the region except the missteps in NDDC are remedied and the NDDC substantive Board is inaugurated in accordance with the law setting up the Commission.”

Niger Delta Elders’ Forum therefore stated that the President should “do well to heed the call of Niger Delta leaders, governors, youths, women, traditional rulers, civil society organisations, and other stakeholders, comply with the law setting up NDDC, and also fulfill his own promise of June 24, 2021, and inaugurate the board to represent the nine constituent states, and thereby ensure proper corporate governance, checks and balances, accountability, transparency, and probity in managing the Commission.”