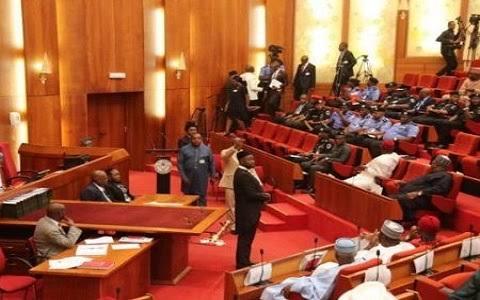 The Senate, on Wednesday, screened and confirmed the seven ministerial nominees whose names were sent to it last week by President Muhammadu Buhari for confirmation as Ministers-designate.

This is as one of the nominees, Ekumankama Joseph Nkama, called for compromise between the Federal Government and the Academic Staff Union of Universities (ASUU) on one hand, and an increased budgetary allocation to the education sector by the National Assembly on the other hand, as the solutions to the incessant ASUU strike.

The screening exercise, which started at about 12noon, lasted till 4:37pm.

While fielding questions from Senators during the screening exercise, Nkama admonished young Nigerians to tap into new areas of investment, so as to foster self-reliance and productivity, particularly in the country’s trade sector.

On the lingering strike action by ASUU, Nkama called on the federal government and the University teachers to reach a compromise.

He also asked the National Assembly to provide additional funding for the educational sector, so as to meet some of the needs of the union.

He said, “there will be the need for compromise. For a very long time ASUU has been sticking to their guns that all the agreements reached earlier must be implemented.

“And we know that from the same source – the same national purse – there are several contending interests seeking for attention.

“My advice will be that federal government and ASUU will have to come to a compromise, and through this, we would be able to solve the issue of ASUU strike once and for all.

“I know the importance of budgetary provision. I want to appeal to the Senate that when the budget is being made for the coming year, there will be adequate provision for the education sector, so that some of these needs that the ASUU members are asking for as a union will be met.”

Also, lending his voice on the need for an end to the ASUU strike, Ademola Adewole Adegoroye, said the action by the union was against the interest of Nigerian students, adding that more effort must be made by government to find a lasting solution to same.

Meanwhile, the first nominee to face the lawmakers, Ikechukwu Ikoh, said in tackling the issue of job creation, efforts must be made to grant operational licenses to operators of modular refineries in the country.

Another nominee from Akwa-Ibom State, Umana Okon Umana, who is the Managing Director of the Oil and Gas Free Zones Authority, underscored the need for Nigeria to step-up its production capacity so as to boost foreign exchange earnings and reduce the country’s reliance on importation.

Goodluck Nana Opiah, a former member of the House of Representatives, was asked by the chamber to take a bow, in accordance with its tradition of extending such privilege to past members of the National Assembly.

Umar Ibrahim El-Yakub, the Senior Special Assistant to the President on National Assembly Matters (House of Representatives), said when sworn-in as a member of the Federal Executive Council (FEC), he would sustain and consolidate on the harmonious working relationship between the Executive and National Assembly.