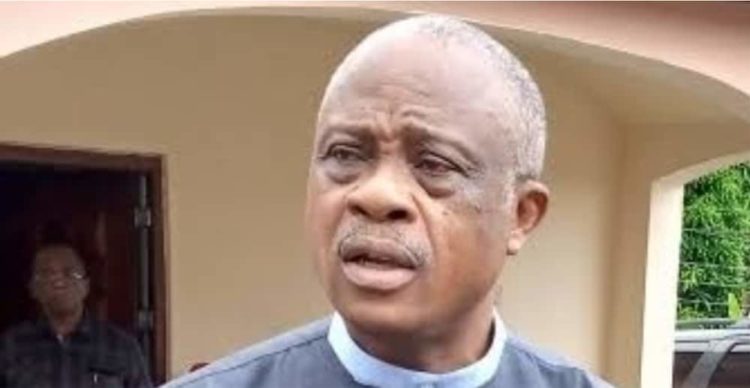 All Progressives Congress (APC) governorship candidate in Abia State, Chief Ikechi Emenike, has promised to restore the status of Aba as the commercial and industrial hub of the old Eastern region if elected at the 2023 polls.

He made the pledge to revive the Enyimba City at a meeting with stakeholders of Aba. Emenike said Aba would be accorded priority attention if he secures the mandate to become Abia’s chief executive next year.

The governorship candidate’s productive engagement with captains of industries, business leaders and sectoral group leaders attracted eminent players in Aba’s business environment, who thronged the venue of the interaction to hear the APC governorship hopeful outline his plans for Enyimba.

The stakeholders could not hide their impression as they adopted Emenike as their consensus candidate for the 2023 governorship poll in Abia, describing him as the “most credible candidate with convincing and practicable blue print to bring about the resurgence of the moribund commercial city.”
According to them, having listened to other governorship flag bearers they have come to the conviction that the APC candidate has what it takes to move Aba out of its present deplorable condition, adding that other candidates lacked sincerity of purpose.
During the interaction, Emenike acknowledged the concerns of the Aba stakeholders over the decay in the city, noting that the 24 years of the Peoples Democratic Party governance has brought economic stagnation, insecurity and perpetual looting of Abia treasury.
He assured the stakeholders who had already resigned to fate and lost hope on Enyimba revival, that he was fully prepared to change the ugly narrative hence they must keep hope alive.
“We have it clearly written in our manifesto what we want to do from the day we take over government. And from that day the state will not be the same again. Mark my words,” he said.
In her remarks, the deputy governorship candidate, Mrs Gloria Akara bemoaned the near total collapse of economic activities in the city, which she noted was hitherto the pride of Ndigbo in trade, commerce, and technological innovations.
However, she assured the stakeholders that “with Emenike in power the lost glory of Aba will be restored. Enyimba City will become popular once again.
Unemployment will be addressed. Decayed infrastructure will be rebuilt and the economy restored. Insecurity will give way”.
The APC candidate for Abia South senatorial district, Dr Blessing Nwagba, said the state would no longer be entrusted to leaders without vision.
She rallied Aba residents and the business community as well as the entire components of Abia South to support APC, saying that “everyone must be involved in the change we desire”.
Among the notable members of Aba business community at the event were Chiefs Kalu Nnanna Kalu and George Nnanna Kalu, Sir Albert Okafor, president of IOMA; High Chief Anayo Okeke, chairman, Azikiwe Road Tyre Dealers; Chief Chinkata Benson, chairman Plant Dealers and Allied Technicians, Port Harcourt Road.
The clergy in Aba were not left out as some of their top members, including Prof (Rev) Frank Obasi, Revds Joseph Nwankwo, Promise Agharanya, Joshua Ekpo, and Kaycee Erondu as well as Pastors Stanley Nwankwo, Ikechukwu Joseph and Christian Okpokiri all graced the event.
Others were Sarkin Hausa, Alhaji Bello Shehu II, who was represented by Waziri Suleiman, Hossouni Amadu, Arewa Youths leader, and the secretary, Anambra Community supporting Emenike, Hon Clems Anekwe.