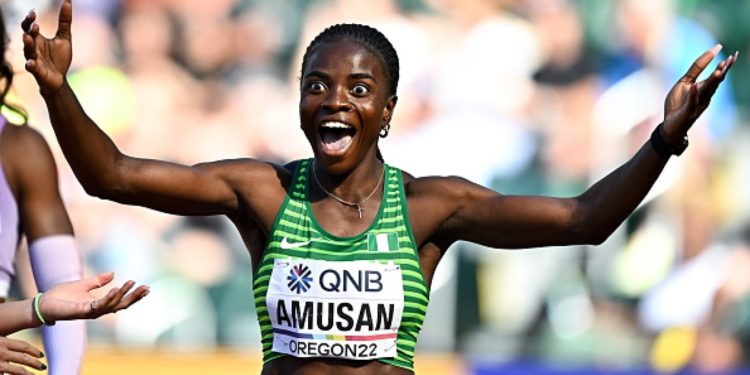 Record-breaking Nigerian athlete, Tobi Amusan, has expressed delight at her performance at the 2022 Commonwealth Games in Birmingham, United Kingdom, saying she is happy leaving the Games with a new African record to her name.

Amusan clocked a time of 12.30s in Sunday’s final at the Alexander Stadium to successfully defend her Commonwealth Games title and the reigning World Champion is happy with the latest addition of titles and records to her name.

The 25-year-old sprinter, who also inspired the Nigeria’s women’s relay team to gold victory with a new African record of 42.10 seconds, which erased the one-month-old 42.22 seconds African record they set in Oregon, USA, at the World Athletics championships, said she had to stand up to achieve the victory even though she was not originally scheduled to run with the team.

“I didn’t know I was going to run on the relay team; it was a last-minute thought but I came up for the team and the goal was to get gold, which we did; the rest is now history.

“I came to this championship to defend my title, and I didn’t just defend it, but did it with a new Games record and I’m happy leaving the Commonwealth Games with another new African record to my name,” Amusan said in an interview with newsmen alongside her relay teammates.

Favour Ofili, who also spoke in the interview, said breaking the African record was one of the mandates of Nigeria’s 4×100 women relay team in Birmingham.

“When I said we are going to win, I wasn’t playing because I knew we all had what it took to win, and we did it, not just breaking the record but passing the message.

“Breaking the African record was one of our mandates coming here; not just for our individual reasons but having an African record as a team is fantastic. We broke the record just two weeks ago and we did it here again.”

For Grace Nwokocha, winning the Commonwealth Games women’s 4×100 relay gold means a lot to her after failing to win a medal at the African Championship.

“This is special to me because I felt bad not winning a medal at the African Championships. But coming here I have put myself together to make sure we execute it properly and get the African record and gold medal. I’m happy to do that. We will continue to go forward and not think backward,” Nwokocha said.

She attributed the team’s victory to team work. “We had to work together as a team, get close to each other and understand ourselves to get the work done, and that helped us a lot to get to the stage we are at right now.”

It has been a great season for me – Rosemary Chukwuma

Chukwuma said it has been a great season for her and thanked God for giving them the strength to achieve the victory.