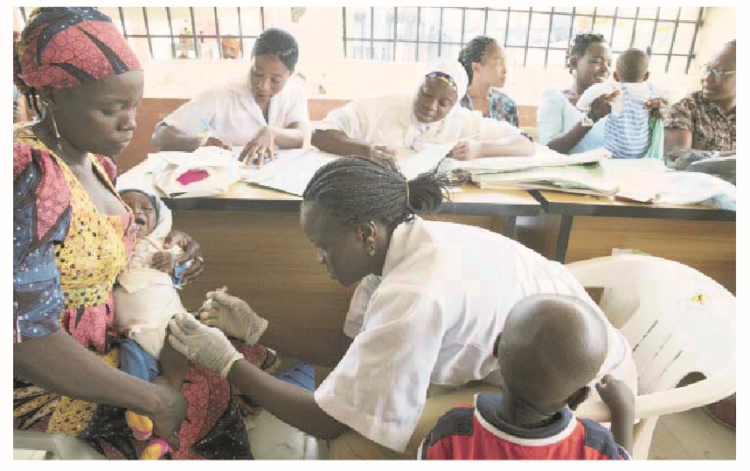 Poor knowledge and attitude of rural mothers towards routine childhood immunisation has remained a setback to the fight against vaccine preventable deaths.

This has become a serious concern as Nigeria children continue to die from vaccine preventable diseases.

The United Nations Children’s Fund (UNICEF) and GAVI, the Global Vaccine Alliance have said Nigeria is the second country globally with  the highest number of zero dose children who have never received any single dose of vaccine against child killer diseases.

Recently, Amuruto-Kugbo, Emago-Kugbo and Akani-Kugbo communities in Abua/Odual local government area of Rivers State witnessed an outbreak of measles which claimed the lives of over 50 children.

When our correspondent visited the LGA,  a mother of four, who identified her self as madam Blessing, said her neighbuor lost her daughter to measles but said she was lucky because her two children were also down with measles but they survived probably because they were immunised against measles.

She said many mothers in the community don’t take child immunisation serious and being a riverine and hard-to-reach community, access to health facility is a challenge, so many of the women don’t bother to go through the stress of taking their babies to the nearest health facility for immunisation.

However,.in some other communities in Abua/Odual local government area, nursing mothers seem to be knowledgeable about the benefits of immunisation.

A nursing mother in Okolomade community in LGA , Mrs. Ikpoki Stephen, said mothers in her family, her  neighbuors and many other nursing mothers in the area know the routine immunisation days and they ensure that their children don’t miss any.

According to her, “Like me, I registered at Emelego Health Centre and that was where I had my baby. Even though our communities here are far from the city, I never failed to take my children for Immunisation. I always make sure that i complete all the immunisation in order for my children to be alive.”

Another nursing mother who identified herself as Joy, said she always mark the next date of her children ‘s Immunisation on their cards so that she doesn’t forget, saying she has never missed any Immunisation date as all her children received their complete immunisation.

Also, a  health officer at Kom-Kom Primary Health Care in Oyigbo LGA, who pleaded for anonymity said a lot of mothers and their children travel from other communities to come to the health facilities for immunisation.

He said there has not been any record of death resulting from vaccine preventable diseases in the facility.

He, however, identified inadequate  manpower,  poor power supply and working space constraints as some of the challenges in the facility.

The acting director, Community Health Services, Rivers State Primary Healthcare Management Board, Dr. Joy Tonye Wihioka, said many women in the state know about the importance of immunisation so they are always willing to bring their children for Immunisation.

Wihioka said: “many women in the state willingly bring out their children for routine immunisation.

On COVID-19’, she, however, said that people in the state did not embrace vaccination initially due to some conspiracy theories, but later started accepting the vaccine following enough sensitisation.

The acting director said: “When we started the Covid-19 vaccine, the coronavirus disease was new to everybody around the world. It was not unique to our State or Nigeria. When the vaccines came up, we had a lot of issues because people said it came too soon.

“The vaccine was not widely accepted for several reasons which we all experienced; like doubts, fears, rumours and misconceptions. But the picture became clearer to  people.

“There were a lot of conspiracy theory surrounding the Covid-19 vaccines at a time. But, the government has tried to enlighten people and of course, with the advent of social media and the internet, people have realised that you can read up of those things and find knowledge and seek knowledge for yourself.

“It is over one year that we have been given Covid-19 vaccines and there is no serious adverse effect directly related to the vaccines. People have started accepting it very wholeheartedly. We are vaccinating till date. People work into different centres and take the vaccine and come back for the second dose and the booster doses. So, the acceptance is much better.”

Residents of Port Harcourt, the state capital, confirmed that initially, they were afraid to take the COVID-19 vaccine due to stories about the negative effects of the vaccines but later began to accept it after being educated.

Speaking to our correspondent, a resident of Woji town in Obio/Akpor local government area of the state, Mr. Clement Okon, said every member of his household has taken the Covid-19 vaccine up to the booster doses.

Okon said: “You know initially, there was this fear about taking the vaccine. We heard a lot of stories that could not be verified. So one day, I summoned courage and went to the health centre to take the vaccine.

“After some days, I didn’t grow horn, nothing changes in my body as people were talking. Based on that, I encouraged my wife and other members of my house to go and take the jab.”

However, most primary healthcare centres in the state, especially those outside Port Harcourt metropolis, made up of Port Harcourt City and Obio/Akpor local government areas, have one common challenge; lack of power supply for the storage of vaccines.

At Obeakpu-Ndoki Primary Health Centre, in Oyigbo local government area of the state, a health officer, who pleaded for anonymity, described the turn-out for COVID-19 vaccination in the facility as moderate, saying that they have enough Covid-19 vaccines for those coming to take the jab.