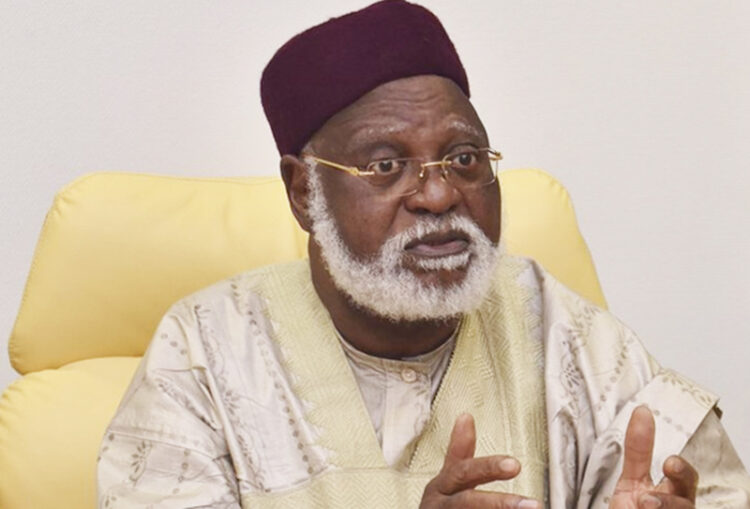 As Nigeria marks its 62nd independence anniversary, former head of state, General Abdulsalami Abubakar, in this interview, speaks on some topical national issues including security and the ASUU strike. ABU NMODU presents the excerpts.

What is your assessment of Nigeria as she marks her 62nd Independence anniversary?

There is no doubt that we have pitfalls along the way, hopefully politicians are correcting themselves and electorates are learning. But the most challenging is the issues of vote selling and buying, all hands must be on deck to remedy the challenges.

At 62, what do you think Nigeria should have done differently?

That is a very difficult question. What should have been done? I will rather say that we should be doing more on the political theatre. If you look at the Nigeria of today going back 60 years ago, you will see that there are many non governmental organisations (NGOs) that are all coming out and all for the sake of Nigeria and each one of these NGOs are looking for the betterment of the country. I see, again, that the young generation of the country, people like you, are getting more interested in politics.

Indeed, we should be doing better than what we are doing today. Politics especially in developing countries and indeed in all over is now becoming a matter of resources. Unfortunately, the younger generation have not gotten as much resources as the older generation who have been in politics. This is one of the challenges the younger generation are facing but hopefully with the birth of social media and technology, I think a lot can be done in order to disabuse the minds of people to play politics well. I think with technology, the politics of this year should be about ideals. So, it is a big challenge but you people said the struggle continues. I hope one day we will overcome this phenomenon.

When you were handing over power in 1999, you also handed over a Constitution. But there is this opinion, shared by many people, that the constitution you handed over is more of a military document which did not take into perspective many of the issues happening today. Even though there have been attempts to amend the Constitution, it still appears as if it is undesirable for the country. How do you respond to this?

Well, it is not about who wrote the constitution, it is about how it is practiced. There is no constitution in the world that is completely, one hundred percent correct and it is unfortunate that people who participated in drafting the 1999 Constitution are not being appreciated for the work they did. If you look at the 1999 and 1979 Constitutions, there is not too much difference. When we were trying to draw up the 1999 Constitution, Jurists led by late Justice Niki Tobi went round the country to sample opinions on the way forward on the constitution. Thankfully, we were able to give a constitution that has been operational for the last 22 years which has helped the National Assembly to do some amendments and I think it is still going on there. So no matter what Constitution you write, it is more about the way you implement it and the way you respect it. Since 1999 the Constitution has been operational up till today and that is what our National Assembly is working to ensure that they  clear some of the grey areas they find in the Constitution.

What are your desires for Nigerians in the midst of challenges as the political campaigns begin?

First and foremost, I wish Nigeria peace and peace and peace again, because without peace there wouldn’t be any country, without peace none of us would be here today talking. So I want to wish us well as we celebrate 62nd Anniversary of our Independence and appeal to all Nigerians to put hands together to ensure that we have a peaceful country. As we are going into the 2023 election campaign, there should be campaign on issues, no campaign of calumny. There should not  be abusive words in our campaigns. Each politician is trying to sell his manifesto and that of his party’s, so you know we cannot all belong to the same party, of course, even if we do, we should try to ensure that we have a country. So my prayer is that we have peace in our campaigns which will lead to peaceful elections. So I want to wish us well and I hope the electorate would also bear in mind that it is their franchise to ensure that they vote people of calibre, of their choice and for God sake nobody should go and sell his vote. Unfortunately, I was listening to one radio programme this morning and somebody was saying that he is ready to sell his vote because he is poor and has no money in the country. Somebody countered him and said look, if you sell your vote, how much is the money that you are going to get, how long it would take you, don’t sell your franchise. So I am happy people are realising and are also educating people not to sell their votes.

What is your take on cry for restructuring and marginalisation?

Unfortunately, people keep shouting restructuring, for whom and what are you restructuring? There is always a cry of marginalisation even in our houses.  People’s cry of marginalisation is a matter of how you manage the system and so on and so forth. Like I said about the Constitution there is no perfect  Constitution, of course, when you look at things that are said to be wrong you see that there is always a way of doing things. This is what we have been saying with somebody, that is why we have the National Assembly. These are people we have elected to go and administer us and make laws for us. Let us look into all these issues with passion not with selfish ideas, let us think about Nigeria not of my state, not of my villagers. So we have to get the right calibre of people who will think about the country. There are always going to be problems, but let us look at things and try to make sure that there is equity, justice and fairness, that is all we need in the country.

Education is key to national development yet, the Academic Staff Union of Universities (ASUU) has been on strike for seven months. What do you think is the way out of this crisis?

Well, like I said, in any society there are always problems here and there and the only way is to sit down and look at the problems and try to see as much as possible how you resolve the issues. Of course, you will  find people with grievances, one way or the other, so it is left for the authorities and also those involved in the Education system to look at it and see how it can be resolved. Unfortunately, for the last seven months our children have been at home because of the problem between ASUU and the government. I thought by now the point made by both the government and ASUU should have been sorted out. I hope we are learning and this issue will become a matter of history. I take you back, maybe about ten years ago, in all of West Africa, we had problems. Most of our countries in the southern region you find that there was a problem in the Education system, I don’t know if some of you would recall during that period most of our educational system in West Africa were grounded because of misunderstanding, some countries have already found the solution, Nigerian will  also find a solution to all these crises.

The call for traditional rulers to have specific roles in the Constitution of Nigeria has been on for some time now. Do you support the call?

It depends. Unfortunately, the 1999 Constitution removed the role of the traditional rulers’ institution on one side. Well, they can do quite a lot to make sure the system works. So I think if society feels and our members feel they need to bring them back to the system so be it.

In recent times, you have been seeing a lot of presidential candidates coming into Niger State. Have you in any way endorsed a particular candidate?

Yes, I endorse all of them.

What is your advice on security in Nigeria?

Security is everybody’s business. Unfortunately, we have unpatriotic Nigerians who have become informants,  to the insecurity in this country. I pray and I hope that such people will be traced. When you are talking of security, we all know that our security personnel are overstretched. So we need to recruit more security personnel, equip them and as much as possible try to give them information that will assist in improving the security system. So my advice is that the people, as much as possible, should trust the security agents and try to give them information that would assist them in securing our country. So with this, I want to wish Nigerians a happy 62nd anniversary and I pray that we have a peaceful campaign in the election. Also it would help the nation that the contestants, if they feel the election is free, fair they would accept the result and concede defeat because I find out that in the developing countries nobody accepts defeat. You all find people complaining that they won but were rigged out. I hope very soon we come to realise there is always going to be a winner and a loser and once you become a winner everybody becomes your own and you do justice and fairness to all and sundry. So I wish as well I wish Nigerians peace, may God continue to bless Nigeria, protect us and help us in nation building.