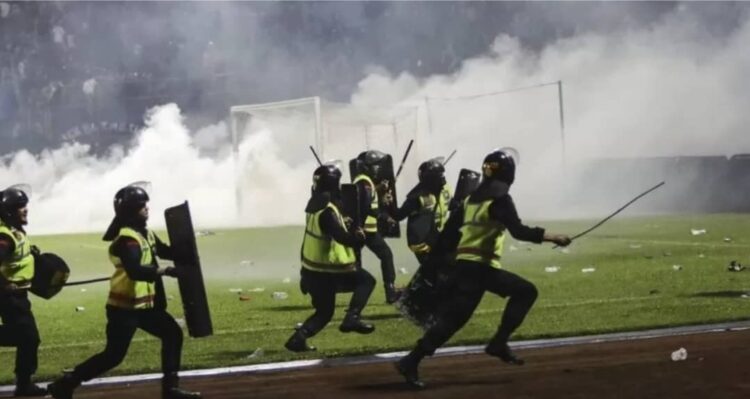 At least 174 people have died in a stampede at an Indonesian football match, in one of the world’s worst stadium disasters late Saturday.

It happened after police tear-gassed supporters who invaded the pitch after the match.

About 180 were hurt in the crush after local team, Arema FC, lost 2-3 to bitter rivals, Persebaya Surabaya, in East Java.

President Joko Widodo has ordered that all matches in Indonesia’s top league must be stopped until an investigation has been concluded.

Videos show fans running on to the pitch after the final whistle.

“It had gotten anarchic. They started attacking officers, they damaged cars,” he said, adding that two police officers were among the dead.

“We would like to convey that… not all of them were anarchic. Only about 3,000 who entered the pitch,” he said.

Fleeing fans “went out to one point at the exit. Then there was a build-up, in the process of accumulation there was shortness of breath, lack of oxygen,” he added.

The world’s governing football body, FIFA, states that no “crowd control gas” should be carried or used by stewards or police at matches.

The Indonesian Football Association (PSSI) said it had launched an investigation, adding that the incident had “tarnished the face of Indonesian football”.