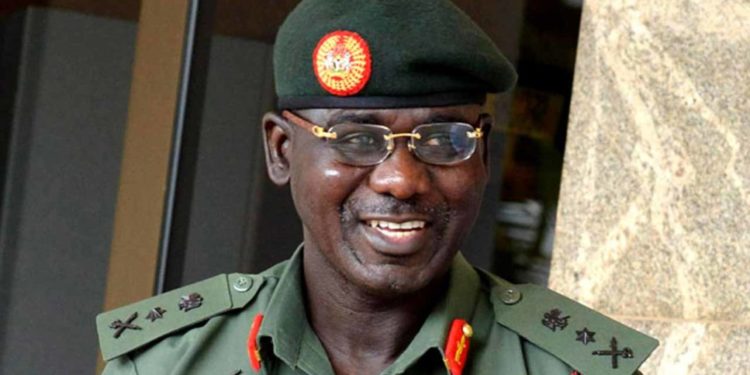 As both a snake charmer and trained warrior, the former Chief of Army Staff (COAS), Lieutenant General Tukur Yusuf Buratai, has fully qualified as a security expert whose contributions to the design and implementation of security policies have remained outstanding.

His career in the military which started in 1981 when he enrolled as a cadet in the Nigeria Defence Academy (NDA) and terminated in 2021 when he pulled out as COAS had been particularly inspiring.

Although the heightened insecurity he inherited in 2015 when he became the COAS and which persisted, nay escalated, during his time was an obvious challenge that sought to diminish his reputation as a military chief, Buratai is still regarded as an indispensable factor in the enforcement and sustenance of all the security measures in Nigeria. Even the current disturbing various threats to national security which are continuously analyzed in the context of the various steps that he, in collaboration with the other service chiefs and heads of security/intelligence agencies, had taken towards the control of the situation, have not taken away the fact that the former COAS is a well-acknowledged authority in security management.

Buratai who is now Nigeria’s ambassador in the Republic of Benin is clearly not unaware of the justifiable expectation that he will continue to play fundamental roles in the search for a way out of the prevailing security crisis. Such roles will definitely serve as critical inputs to the management of the security situation in the country as much as they will be readily helpful to all those who consistently seek to identify the major components of his approach to the problem which, by the judgment of several security analysts, had not yielded the desired results.

It is, perhaps, in the recognition of the fact that he still has a responsibility to discharge in the fight against all forms of violence that, while presenting a paper—Politics and Insecurity in Nigeria” on Saturday June 11 2022 at a symposium in Arewa House-Kaduna, the former COAS prescribed measures for the de-escalation of violent crimes in the country. He advocated the adoption (Or is it sustenance?) of kinetic and non-kinetic measures as the most effective strategies for the fight against terrorism.
As a military man, he, unsurprisingly, emphasized the need for the application of the kinetic method which is all about the deployment of force, but which, according to him, is usually only one third of all the strategies for the fight against terrorism. It is a measure that, particularly in the prevailing circumstance, necessitates the supply of abundant and more sophisticated equipment as well as a clear enhancement of the welfare of the security personnel.

Additionally, he recommended the revitalization of the Defence Industries Corporation of Nigeria (DICON), establishment of what he called the National Border Force and the provision of mechanism for the blockade of supply of illicit substances to the terrorists. The takeover of “ungoverned spaces” by government is another prescription which Buratai believes will hinder the movements of the criminals who have now literarily taken over much of the forests in those states where the insecurity is most pronounced.

But the former COAS appeared to have put more emphasis on the non-kinetic approach which is about effective and continuous engagement with the public. Sensitisation of the people which can lead to fruitful dialogues amongst the various stakeholders is a key method in the resolution of most of the crises that easily give birth to insecurity.
Involvement of traditional rulers, religious leaders, media and all the other relevant institutions in counter-terrorism operations is equally most necessary as it will not only allow but will also facilitate the participation of the civil populace in the maintenance of security. It is his belief that the recruitment process of the terror groups can be obstructed only if the various segments of the society from which new members are drawn have representations in the larger team of the problem solvers.
Buratai’s submissions at the recent Kaduna event as valid as they might have appeared are already a basis of some questions about his performances when he was the COAS. All the ideas he mouthed are familiar ones to even those Nigerians who are not necessarily security experts, which is the reason for the widespread feeling of disappointment over his failure to put them into use when he was in a position to do so.

Yes, it is true that security in Nigeria even after Buratai’s exit has only continued to deteriorate which, though terribly unfortunate, has validated some of the excuses he and the other managers of the country’s security architecture offered for the persistence of violence during their time. The continuous escalation of terror attacks since his retirement one and a half years ago is enough to make him feel that his tenure as COAS was, after all, not a failed one.
However, the more pronouncements he makes on the current security situation, the more it is recalled that the set of security chiefs of which he was a part performed far below expectation. The ceaseless expression of dissatisfaction by most Nigerians over the low performance was a clear ‘vote of no confidence’ on that particular set of security managers.

Apart from the ordinary people, many of whom have been clear targets of the incessant violent attacks and therefore victims of insecurity, the National Assembly members unequivocally called for the sack of Buratai and those other security chiefs under whose watch the dignity of human lives was substantially compromised. It was even the reluctance shown by President Muhammadu Buhari to heed the call for the removal and even probe of all the service chiefs who were accused of negligence that made the opposition against the government to thicken.

This means that Buratai whose appointment as an ambassador was seen as a tremendous show of insensitivity and disrespect to the feelings of Nigerians by President Buhari was and is still a bad news in a lot of critical circles in the country. His failure to effectively lead the other security managers in the protection of the lives, health and wealth of the citizens is a fact to which reference will continuously be made by security analysts.

Even with the point that he was merely an inheritor of some of the violent crises and not an architect of them, he will still be consistently subjected to criticisms because of the rampant violent attacks on Nigerians during his time as COAS and even up till now. The realisation that he was, for more than half a decade, in a position to apply almost all the prescriptions he has now recommended, but failed to do so, constitutes the source of the fury that his statements have so far generated.