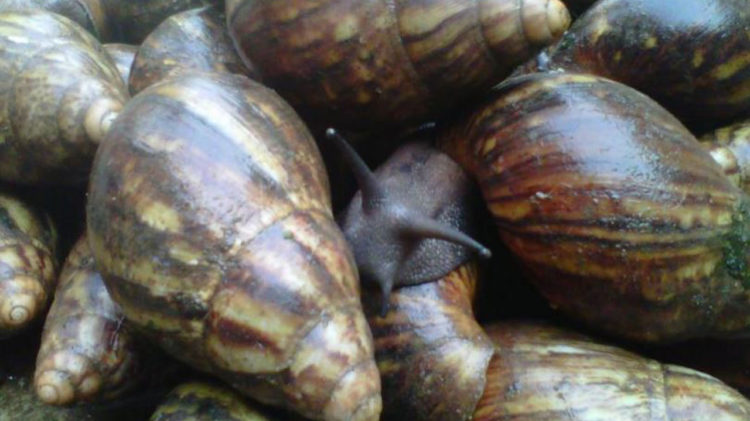 Snail farming is one of the most underrated but lucrative businesses  that has been taken for granted for a long time and the economic benefits are very high to the local farmers.

It is advisable that, when creating a snail farm, a single species of snail is important. Also, research has shown that snail species such as; Achatina Achatina and Achatina Maginata are one of the best for warm climate regions like Africa.

Snails come in different species/ types; some snail species have a low point of lay; some can only produce a few numbers of eggs regardless of how much they are fed, while some are known for massive egg production.

To make profits as a snail farmer, one has to take into serious consideration the species of snails to be raised on the farm. The most recommended are the Giant African Land Snails (GALS), and they come in three major species, namely; Achatina Achatina, Achatina Fulica and Archachatina Marginata.

Archachatina Marginata: This specie is also called  Giant African Land Snail or Banana Rasp Snail which is one of the largest known land snails in West Africa.  This type of snail is considered a delicacy in Nigeria and its in high demand in both rural and international markets because of its high nutritional values among all species of snail consumed in West Africa and its valuable by-products.

At full maturity, the Archachatina Marginata can live up to 10 years, if given proper care and also can grow up to an amazing length of 20cm weighing 500g.  It grows faster within a short period with high eggs laying features. From the starts of producing viable eggs when it reaches a live weight of 100-125g, but with special feed, it starts laying eggs as early as at the age of 4 months and at an average weight of 70g.

Due to its African rain forest origin, it is commonly seen and is best suited for snail farming in Nigeria.

There are other snails types like Achatina Fulica and Achatina Achatinas which are herbivores. Their diets consist of many plants such as nuts, flowers, fruit, stems, pawpaw, cucumber and leaves.

In other instances, the giant African land snail has been known to eat small insects in order to reach their desired calcium and protein intake needed for survival. Such insects include ants, small worms, and even beetles.

A well researched and calculated approach prior to setting up a snail farm is of importance. The right choice of snail that highly produce eggs is vital while also, the ways to keep the snail farm well kept and the type of soil to use. It is advised that a sandy-loamy soil should be deploy as their natural habitat which keeps it moist, wet and not dehydrated.

Referrals, word of mouth and social media can be put into use about the availability of the product to engage in the sales of the processed and well package snails while individuals, restaurant owners and also hoteliers can be approached for the sales as well.

The rate of cutting down on red meat/ beef can be an attraction for some to embark on feasting on a deliciously well packaged snail produce.

There is a wider market for the processed and well packaged snail products for the local and the international market. This can be a source of foreign exchange when it is exported by the local to the diaspora. A snail which sells for N300 or N500 multiply by 10,000 pieces can easily fetch N300,000 to N500,000.