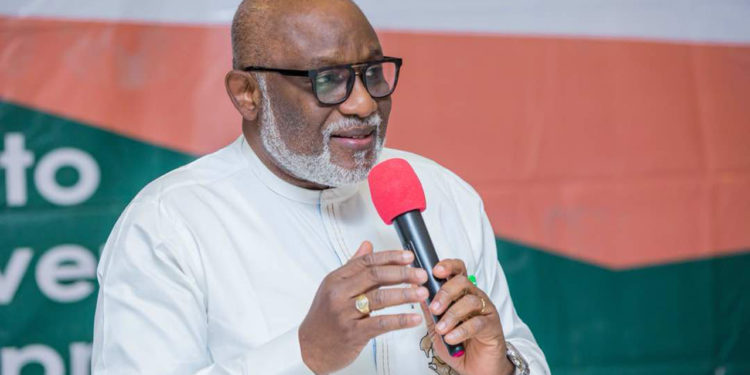 Ondo State Governor Oluwarotimi Akeredolu has said that ISWAP terrorists, bandits and herdsmen are working together in Ondo forest to wreak havoc on the state.

He therefore charged the people to defend themselves against terrorists and promised to do more to make Ondo safe.

Akeredolu, who said the people of the state were indomitable, asked them not to run away whenever the attackers invade their lands, adding that they must confront them.

Speaking during a live television programme, Politics Today, monitored in Akure, the state capital, Akeredolu said people must not run away whenever they are coming to attack them.

He said, “If they bring a fight to you, you also should fight them back. Our people cannot afford to stay back and they think we are lazy people. We are not lazy. We are indomitable people. When we believe and act this, we fight these people back.

According to the governor, “What we have leant from the incident of Owo is that we must take security seriously. And by doing that, it has led us to give an Executive Order on the installation of CCTVs in all public places in the state. We have also called our traditional rulers that we must be ready to defend our land and people.

“What I mean by that is that we must not run away when they are coming. If they bring a fight to you, you also fight them back. Our people cannot afford to stay back and they think we are lazy people. We are not lazy. We are indomitable people. When we believe and act this, we fight these people back.

“Take the fight to them in the forest, Whosoever has the higher hand will survive. We are to be careful about the people around us and we have to be on the alert. When incidents like this happen, don’t run into the house. Go ahead and confront them,” he said.

On whether the act was perpetrated by ISWAP or not, the governor said, “When the federal government said the act was committed by ISWAP, I reacted to that almost immediately. What evidence do they have? Because the security agencies were too quick to jump to the conclusion that it was done by ISWAP.

”Whatever it is; we stand by a position that it is a theology that is operating in our forest to cause havoc. We have Fulani herdsmen, bandits and ISWAP. It is the three of them that are working together. In Ondo State, we have been facing terrorism from the three whether bandits, Fulani herdsmen or ISWAP .

“They work together and I don’t know how you want to separate them except if you have concrete evidence. And again, ISWAP most of the time, takes responsibility for their actions. I think if ISWAP had done this, they would have come up to say they were the one. Some of us have our fears that it is not ISWAP.

“We have very vast forest in the Southwest. Unfortunately, these terrorists occupied the forest. They said they are searching for fertile areas to feed their herds . If you want to feed your herds , you do not need to carry AK-47. If there is rustling, it is not enough for you to involve in criminality.

According to him, “I listened to Amotekun commander, there is no time he made categorical statement about the arrest of the attackers. What he said were very clear that they were on the trail of the perpetrators.

“He said that they have recovered the vehicle and some evidence which they have handed over to the SSS for the required analysis. There was never a time that he said they made arrest.”

“Because of the vast forest reserve we have , they are able to hybernate and we know . But the major problem we have now is that we are not in control of security agencies.”

On the measure put in place by his government to forestall the occurrence of Owo incident, Governor Akeredolu said, “We have done a few things and we have increased men of Amotekun armed them with more vehicles for patrol. We cannot run away and we must be prepared to confront the challenges. Government will try its best but it will be criminal for people to run away without confronting them.

“What we should prioritise today is the country is the State Police. That is the only way of getting out of this issue. As we are here, we run a state security outfit that cannot carry firearms. How do you defence yourself? Amotekun has been doing wonderful work in the Southwest but the point is that, it would have been more effective if they can carry weapons,” he said.