Reverses to Osun state/state of the living spring 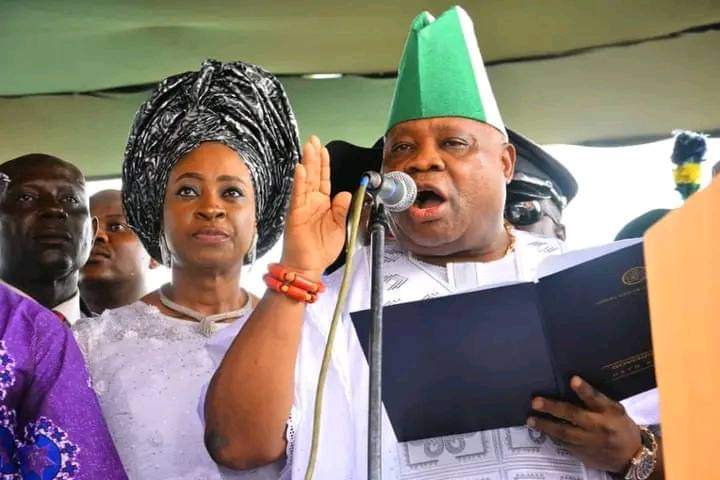 The new governor of Osun State, Senator Ademola Jackson Nurudeen Adeleke, has ordered the immediate reversal of the appellation of ‘State of Osun’ to the constitutionally recognised Osun State.

Besides, he also ordered the reversal of the official State’s appellation from ‘State of the Virtues’ to the original ‘State of the Living Spring’.

Speaking shortly after he was sworn-in as the 6th civilian governor of Osun State on Sunday at the Osogbo Township Stadium by Justice Adepele Ojo, Governor Adeleke also ordered the immediate freezing of all State government’s accounts in banks and other financial institutions.

Adeleke, who promised to meet the expectations of workers, traders, artisans, farmers, business owners, students, pensioners, traditional and religious leaders and indeed all residents of Osun State, vowed to boldly correct all past injustice, corrupt acts or policies by any previous administration which are against the collective interest of the people.

While pledging his commitment to be accessible, responsive, consultative and proactive in handling small and big matters of state governance, the new governor promised to demonstrate a high sense of urgency, transparency, justice and innovation to tackle and solve the problems of poverty, illiteracy, disease, and poor infrastructure.

While promising to ensure local government autonomy in line with the provisions of the Nigerian Constitution, he pledged his determination to restore what he described as the lost glory of local government system in order to make them the third tier of government responsive to the needs of the people at the grassroots.

His words: “All policies that are not favourable to the growth of effective local government administration will be reviewed in accordance with the law.

“No form of illegality will be allowed to stand and all acts of impunity committed by the immediate past administration on local government administration will be reversed following due process.

“My administration will restore the integrity of the civil service which has been bastardised through favouritism and political considerations.

“We will give the civil service a better orientation with a view to restoring its professionalism. In doing this, we will be fair and firm as we act only in pursuance of public interest.

“Let me therefore announce an immediate return to status quo of all fresh appointments, placements and other major decisions taken by the immediate past administration with effect from the 17th of July, 2022.

“I wish to assure all labour unions in the state of our administration’s willingness to protect workers interest and promote their welfare at all times. We will be a labour friendly government.

“We will embark on a security sector reform that will target crime prevention, detection, neighbourhood policing and better synergy among security agencies.

“The Amotekun Corps will be strengthened while our administration will ensure operational linkage between local hunters and the Amotekun Corps. A “Know Your Neighbour” security initiative will be implemented. By the grace of God, very soon, Osun will return to its old nature of being a haven of peace.”

LEADERSHIP reports that Adeleke’s older brother and sibling, late Senator Isiaka Adetunji Adeleke, was the first elected governor of Osun State in the aborted Third Republic between 1992 and 1993.