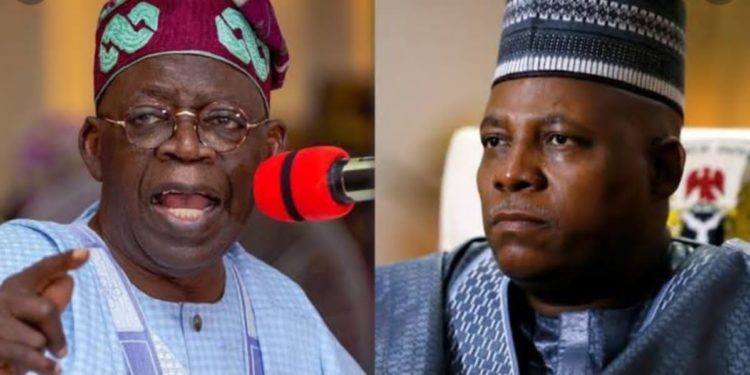 Presidential candidate of the ruling All Progressives Congress (APC), Asiwaju Bola Ahmed Tinubu, has confirmed the nomination of Borno Central Senator, Kashim Shetima, as his running mate for 2023 presidential election.

Tinubu made the confirmation on Sunday while speaking with journalists shortly after meeting with President Muhammadu Buhari at the latter’s residence in Daura, Katsina State.

Tinubu was accompanied to Daura hometown of President Buhari by road by the State governor, Aminu Bello Masari, after landing at the Umaru Musa Yar’adua Airport in Katsina.

Shettima, a former governor of Borno State, was, however, absent during the announcement.

Meanwhile, shortly before the announcement by Tinubu in Daura, Alhaji Ibrahim Masari, who was earlier nominated as a placeholder running mate, announced his withdrawal from the 2023 presidential race.

Before his withdrawal, Masari was nominated as ‘placeholder’ running mate to Tinubu in order to allow the latter ample time to eventually nominate the right running mate for the 2023 presidential election.

In a statement signed by Masari and issued from Saudi Arabia on Sunday, titled, ‘Resignation As APC Vice Presidential Nominee’, he said he was stepping down “after much reflection and wider consultations.”

“This is to inform our esteemed party leaders under our able President Muhammadu Buhari, teeming party members and the great people of Nigeria, of the outcome of a crucial discussion I just had with the flag-bearer of our great party, All Progressives Congress (APC), Asiwaju Bola Ahmed Tinubu.

“Recall that I had the singular honour and privilege of being nominated as the running-mate to Asiwaju Tinubu last month after a keenly contested presidential primaries ahead of the 2023 general elections.

“But, after much reflection and wider consultations, I now wish to step down. I realized that my decision will enable Asiwaju have more latitude to give more accommodation and inclusion that will position our party to win the coming elections, with the support of the people of Nigeria.

“In stepping down, I believe I can still serve our party and the country in several other capacities.

“I wish to confirm that I have submitted my withdrawal letter and affidavit to that effect as the Vice Presidential Candidate to Asiwaju Bola Ahmed TInubu in the coming elections.

“On behalf of myself and family, I wish to sincerely thank Asiwaju Tinubu — the Incoming President, Insha Allah — for his trust in me and we promise to remain steadfast in our support for him and the party,” Masari stated.