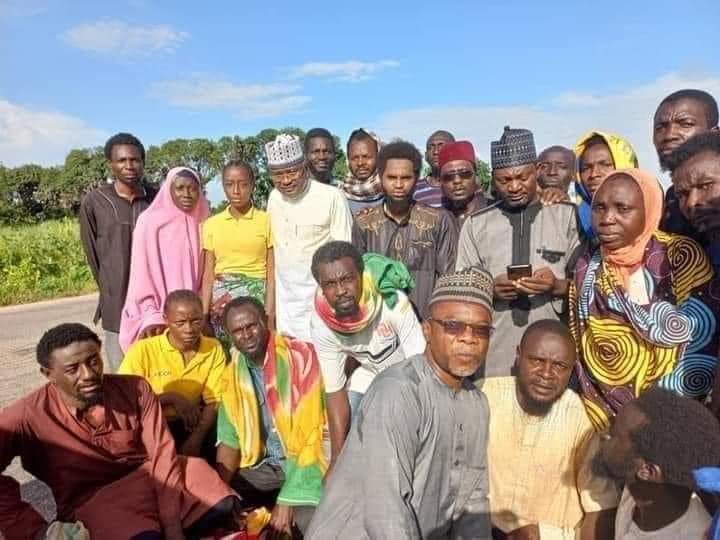 There is relief in affected families and across Nigeria after terrorists yesterday released the remaining 23 passengers on the Abuja-Kaduna train abducted on March 28, 2022.

The release comes after they had spent six months and eight days in the terrorists’ captivity during which they were tortured and subjected to dehumanising treatment.

A statement by the Chief of Defence Staff Action Committee (CDSAC), signed by its secretary, Prof Usman Yusuf, said the victims were released by their abductors yesterday at about 4pm.

The statement reads: “I am pleased to announce to the nation and the world that at 1600Hrs (4pm) on Wednesday, the seven-man Presidential Committee assembled by the Chief of Defence Staff (CDS), General L. E. O. Irabor, secured the release and took custody of all the 23 remaining passengers held hostage by Boko Haram terrorists following the attack on the Abuja to Kaduna train on 28-03-2022.

“The nation owes a debt of gratitude to the Nigerian Military under the leadership of the CDS who conceived and guided the operation from start to finish. All sister security agencies and the Federal Ministry of Transportation contributed immensely to this operation,” he said, adding that the unwavering support of President Muhammadu Buhari helped to make the release possible.

Aminu Lawal Othman, spokesperson for the train attack victims, who confirmed their release to LEADERSHIP, said the operation was purely a military affair, even as he thanked Nigerians for their prayers and support during their trying times.

He said no ransom was paid by any member of the families.

LEADERSHIP reports that the end to this ugly chapter in Nigeria’s history came a month after the federal government repatriated from Egypt Alhaji Tukur Mamu, a self-appointed hostage negotiator who had been overseeing the piecemeal release of the train attack kidnap victims after huge ransoms were paid to the terrorists.

The Department of State Services, which has detained Mamu, the publisher of Desert Herald Magazine and aide to Islamic cleric, Sheik Ahmad Gumi, accused him of belonging to an international terrorist network, with the government promising that engagement with the terrorists would continue towards the total release of the entire victims.

We’re Yet To See Our Loved Ones – Families

Meanwhile, the families of the released 23 kidnapped victims have confirmed the release but said they are yet to see them.

Until the release of the remaining 23 victims, about 40 of the Kidnapped passengers were released in batches, some afterpayment of ransom that ran into hundreds of millions.

Abdulfatai Jimoh, who is the leader of the family of the Kidnapped victims and another family member, Sani Lawal, confirmed knowledge of the release of the remaining passengers but added that they were yet to get in touch with them.

“We got the news of their release but we are yet to get in touch with them; we pray that it is true that they are all released,” Jimoh said.

President Muhammadu Buhari has expressed his gladness and that of the entire nation with the military as well as other security agencies on the safe release of the remaining 23 kidnapped train passengers held in captivity by Boko Haram terrorists.

In a reaction to the news of the safe release of the hostages in line with his earlier directives, President Buhari, in a statement by his media aide, Garba Shehu, said the nation owed the military and all other security and intelligence agencies a debt of gratitude for the successful operation leading to the release of the hostages, saying these agencies had shown outstanding capabilities over this period that the whole world will not fail to take note of.

“This country’s Armed Forces are as good as any. Given needed support and encouragement as we have been doing, there is no task that they cannot accomplish. I commend them for this remarkable outcome,” the president said.

In expressing satisfaction at the successful deployment of both kinetic and non-kinetic processes leading to the eventual safe release of the remaining hostages, President Buhari also congratulated the families of the victims for having them back alive.

He directed that the relief that comes to the nation arising from the closure of this unfortunate saga must be sustained at all times, all over the federation.

The president also credited his government for resolving the issue and the de-escalation of terrorism, banditry and kidnapping that surged recently, giving assurances that the efforts will be sustained.

Following the release of the remaining 23 passengers held hostage from the ill-fated Abuja-Kaduna train, the Nigeria Railway Corporation (NRC) yesterday said service on the Abuja-Kaduna line would be restored soon.

Speaking to LEADERSHIP on phone last night, the spokesperson of the NRC, Yakubu Mahmood, said, “We will resume soon by God’s grace.”

The minister of transportation, Muazu Jaji Sambo, had said the train services would not resume until everyone abducted on March 28, 2022, is released.