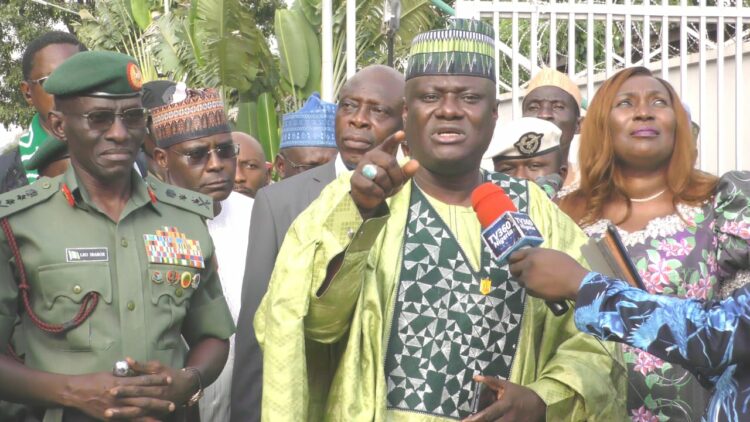 At the gate of the ministry of defence, Abuja on Monday to Tuesday was the parade of protest by retired military personnel under the aegis of six Veteran bodies demanding for the payments of their Security Debarement Allowance. It was a tense atmosphere as temper flared rapturously with restraints almost caving in for violence. The ex-men held to jugular the staff and visitors to the Defence Ministry referred to as shiphouse. There was a push to shove as breakdown of law and order was imminent.

Just when people thought the situation would deteriorate and slide to an endless crisis, then came the Ministry’s Permanent Secretary, Dr Abubakar Kana mni with what is now generally referred to as the ‘smile option’. Wearing a face that smiles in friendly and respectful mein, the man approached the protesting ex-soldiers. Distancing himself from the confrontational lane, he opted for a table of dialogue and pronto, the peace that many thought had eluded the ministry returned with every concerned actor settling for an amicable resolution of the impasse.

Knowing that in times of crisis, when tension is rife, misinformation equally thrives, the Defence Ministry helmsman, therefore, opened the books of the ministry to the protesting ex-servicemen, clearing every doubt and illuminating every dark corner.

Dr Kana dismissed as untrue the rumour that money was released and payment denied the Veterans by the authorities of the Ministry. He described as dangerous misinformation, peddled by mischief makers who are not happy with the longstanding peaceful relationship that exists between the Ministry and her dedicated staff members, both current and former. Assuaging the fear of the Veterans, Dr Kana promised and assured them that the ministry was not going to embark on a fresh verification exercise before payment, stressing that the existing database of all veterans will be used to administer payment.

So elated were the agitating military retirees that the Spokesman of the Retired Veterans of the Nigerian Armed Forces, RENENAF Biodun Durowde Albert spoke in appreciation of the Permanent Secretary’s scientific intervention and attributed the misinformation and the insinuations to the communication gap between the veterans and the Ministry.

In demonstration of mutual reciprocity, the veterans shelved their swords and ordered that the barricades be dismantled.

This situation may seem passive and mundane but have we as a people considered the role of government bureaucrats in resolving conflicts? There is no denying the fact that governance in Nigeria is bedevilled with plethora of issues with reference to workers’ demands and agitations. As we speak, government-owned universities have been closed down for seven months following strike action by the Academic Staff Union of Universities (ASUU). Defying all interventions, the strike has continued, having failed the doses of political interventions. Isn’t it time bureaucratic options become the resolve, like the Kana option in the Defence ministry where his peace doctrine of dialogue has yielded a fair, just, reasonable outcome for the ministry and the protesting ex-military personnel?

No doubt, most labour-related crises in Nigeria are ignited by ego and magnified by self-serving interests of some bureaucrats who continuously feed fat from an unfortunate situation and any bureaucrat who does it differently, needs to be applauded. Dr Kana has been doing it differently and beautifully, and his tested strategies need to be further studied and possibly adopted as a workable template for creating a sustainable industrial harmony between government institutions, agencies, parastatals and her workforce.

And it is time tangible efforts are made for the Ministry of Defence to realistically plan for the welfare of its retirees in order to avoid this kind of impasse in the future. Those saddled with planning and budgeting must make issues bothering on welfare and other benefits of staff their priority. It gives a template of unseriousness to always leave out such an important item out when designing budget for the ministry. It’s good the bureaucratic talisman of the ministry is involving the Chief of Defence Staff General Leo Irabor in this struggle, this way, both the ministry and its defence are stoically involved in planning for the welfare of ex-military personnel that served the country meritoriously.

“if there is one segment of the society that must not be taken for granted, it is the armed forces, whether serving or retired. The implications of what they are doing to those that are retired now is that they are killing the morale of those that are serving at the moment because if they look back and see the way we are being treated, how do you think they would have the enthusiasm to work? They won’t give  their best and we are talking about killing corruption in the country. How are you going to kill it? When someone who is serving finds himself in a privileged office and sees someone who is retired and will he not steal enough to take care of himself after retirement?”

The Ministry of Defence must use this opportunity it has especially with a veteran General Bashir Magashi and bureaucratic Abubakar Kana at the helm of affairs to address all the challenges that have held the ministry stagnant before now. The time for real reforms is now.

2023: Gov Ortom Committed To PDP Victory At All Levels - Igbawua