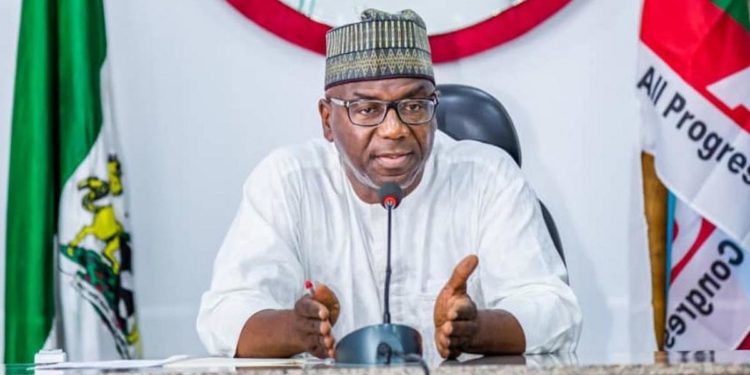 Kwara State government is spending over N4 billion monthly on payment of salaries and pensions of workers and retirees in the State.

The state governor, AbdulRahman AbdulRazaq, disclosed this in Ilorin, the state capital on Thursday night while speaking at a dinner organised in honour of the newly appointed honorary title holders by the Emir of Ilorin, Alh Ibrahim Sulu-Gambari.

Represented by his special adviser on Strategy, Alh Saadu Salahu, the governor said the policies and programmes of his administration, including prompt payment of workers’ salaries, establishment of an Information and Communication Technology (ICT) Hub and the launching of the new Ilorin Urban Masterplan were all geared towards ensuring prosperity for the people of the state.

He called on the people of Ilorin Emirate to take advantage of the new Ilorin urban masterplan to invest in their home town in order to reduce the problem of unemployment and as well stimulate the economic growth of the city and the entire state.

AbdulRazaq explained that the new Ilorin urban masterplan is aimed at attracting local and foreign investors into the state over the next 20 years.

“I charge sons and daughters of Ilorin Emirate visiting during sallah to take maximum advantage of the new Ilorin urban master plan to invest in their home town as part of efforts to empower our people and stimulate the state’s economy,” he said.

On the ICT hub project, the governor said the project was being undertaken “to mainstreaming our youths into digital economy where billions dollars worth of business are conducted online in seconds .
This is our vision in the ongoing construction of the ICT hub , the conference centre, export processing zone, etc.”

He expressed delight that his administration’s robust partnership with IEDPU and similar unions has brought about peaceful coexistence amongst the people of the state and has earned the state being described as the most peaceful and secured state in the country .

He congratulated the Emir, the IEDPU leadership and the award receipients and assured them of his avowed commitment “to supporting the union in our collective vision for rapid socio – economic development, peace and tranquility of the State.”

Earlier, the IEDPU President, Alh Aliyu Otta-Uthman, had thanked the governor for his uncommon support for the union, attributing the union’s successes to the consistent overwhelming support it received from the governor.

Otta-Uthman charged the honorary title holders in Ilorin Emirate to serve as agent of peace and unity, adding that: “We plead with you to work towards ensuring that that the unity of purpose we inherited from the founding fathers of Ilorin Emirate is maintained. You should work to ensure that the tendencies for disunity among our people are completely wiped off.

“This call for peace is necessary now more than ever as we are going into another round of general elections next year. We plead with those of you who are contesting for one position or the other to conduct yourselves as statesmen who always think of the next generation. Politics can be conducted peacefully. We must show the rest of the nation that we are positively different.”

The IEDPU president solicited the title holders support toward the completion of the union’s Skills Acquisition Hub project which he said has gulped over N50m.

In his sermon, the guest lecturer, Dr AbdulSobur Alaaya, emphasised the need for unity amongst the people of Ilorin Emirate and hailed the purposeful and exemplary leadership style of Governor AbdulRazaq.