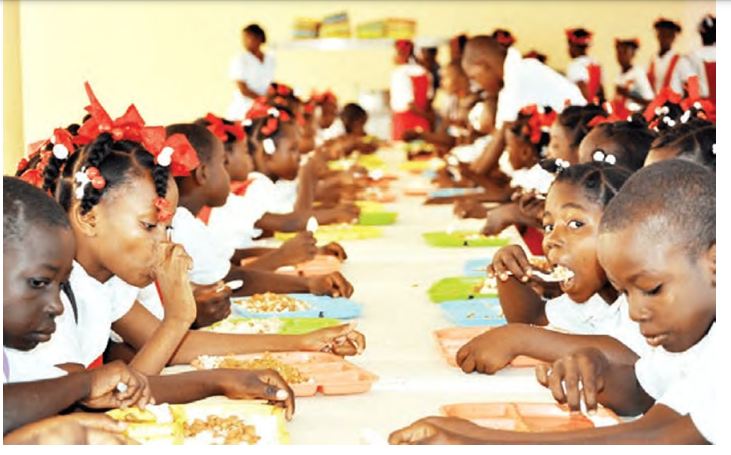 Nigeria has one of the highest burdens of childhood malnutrition, with disorders affecting more than 42 per cent of school children in the country and responsible for 49 per cent absenteeism of primary school age children, according to United Nations Children’s Fund (UNICEF). The UN agency estimates that 2.5 million Nigerian children under the age of five suffer from severe malnutrition each year, with about half a million children dying from it.

The School Feeding Programme To curtail the effect of malnutrition on children, the federal government launched the National Home Grown School Feeding Programme in June 2016 to give pupils one free meal a day. NHGSFP, which is part of a N500 billion fund social investment programme, was designed by the federal government to tackle poverty, improve the health and education of children and other vulnerable groups, aiming to feed over 24 million school children. Although government is not specific on the duration it will achieve this.

The feeding programme is designed such that the federal government takes up the feeding of pupils in primary 1 to primary 3, while interested state governments take up primary 4 to primary 6. So far, the National HomeGrown School Feeding Programme is currently being implemented in 35 States of the federation and the FCT while over 103,000 women have been engaged and empowered as cooks under the programme with about 10 million pupils being fed across public primary schools in the country.

In the FCT, the programme which was launched in 2020 targeting over 120,300 pupils across the six area councils. Currently, it is providing funds to state engaged vendors and suppliers as 81,416 pupils are benefiting.

According to FCT focal person, Aishatu Digir, “An enumeration exercise is ongoing to verify these numbers, after which we can have basis for scaling up,” she said. A visit to some schools revealed that pupils are mostly fed during the first break period. The cooks normally prepare the food from their homes, mostly rice, yam and a mixture of fruits and take it to the respective schools for the students.

The Impact of School Feeding Findings revealed that NHGSFP has since delivered a cost-effective home-grown school feeding programme, increasing school enrollment, reducing the incidence of malnutrition especially, among the poor; empowering cooks while supporting local agriculture through small holder farmers, thereby stimulating economic growth through the socioeconomic value chain. Our correspondent who visited some beneficiary schools in Abuja observed that the programme is bringing succour to many kids as there is increased enrollment as well as addressing the malnutrition crisis in children in most of some of the schools visited.

LEADERSHIP also observed that the inability of the government to include children in primary four to six had experts. Dr. Olasunkanmi Okunola, a DAAD Climap Africa postdoctoral fellow at the University of the Witwatersrand said N70 per child is not a realistic budget that can provide food that will keep children in school pealing for extension of the programme to other classes due to its significant impact. During our tour to LEA primary school, Jabi, Abuja, children could be seen cheering and trying to outpace each other to obtain their plate of food.

As the food was placed on their plates, they sat down gently and began to eat. “I want the government to continue to feed us until we finish school,” a boy identified as Salihu told our correspondent during the tour. The head teacher of the school, Comrade Umar Mohammed Makusidi said the programme is, to a large extent, helping to solve the problem of malnutrition in children. He commended the government for the initiative, while appealing for the extension of the programme to other classes. “Actually school feeding programme is something that is very important in terms of enrollment in our school.

“Actually, you know children, anything they see, even if it is one spoon that is what they are looking for. Even if the child is feeding well at home and in getting to another place they give him a plate of food you will encourage that child. “So it is really encouraging the pupils to turn up in the school.

“Actually it is good and it’s a good beginning but I want the government to put more effort because now it’s just covering primary one to three so if they can make it cover primary four, five and six as well, it will go a long way,” he said. Makusidi added that the school has over six hundred (600) pupils who are benefiting from the programme. Across the states, there are reports on the gains and pains of the scheme, how NHGSFP has increased school enrolment and reduced absenteeism. There are challenges too. The Challenge Despite the progress recorded,issues relating to payment of vendors, paucity of funds, rising cost of food items and inability of government to cover all public schools are hindering the success of the programme. Government has trained and licensed vendors who sell to schoolchildren while they receive pay at the end of the month, but most vendors, according to investigation, are not willing to continue with the job given government’s unwillingness to increase the money to meet up with the current challenges. Also, the general quality and quantity of the food served has been affected by the current economic downturn which saw a drastic rise in the prices of food items. The unrealistic budget of seventy naira which the Federal Government allocated to feed a child per day raises questions over the quality of food being served.

The way forward In light of the aforesaid challenges of the School Feeding Programme in Nigeria, some experts suggested that the current budget of N144.9 billion per year for the School Feeding Programme is a strain on the finances of the country. Dr. Olasunkanmi Okunola, a DAAD ClimapAfrica postdoctoral fellow at the University of the Witwatersrand said N70 per child is not a realistic budget that can provide food that will keep children in school, improve the nutritional and health status in the present economic meltdown.

“This necessitates the need for the Federal and state governments to seek financial support from local and international organisations such as World Bank, UNICEF, among others, to strengthen and increase the efficiency of the feeding programme,” he said.

This story has been supported by Nigeria Health watch through the Solutions Journalism Network, a nonprofit organisation dedicated to rigorous and compelling reporting about responses to social problems, solutionsjournalism.org