The primary responsibility of the Nigerian Navy (NN) is to protect the nation’s maritime environment of about 84,000 square nautical miles. In this report, TARKAA DAVID reviews efforts put in place by the Navy in manning the country’s waterways. 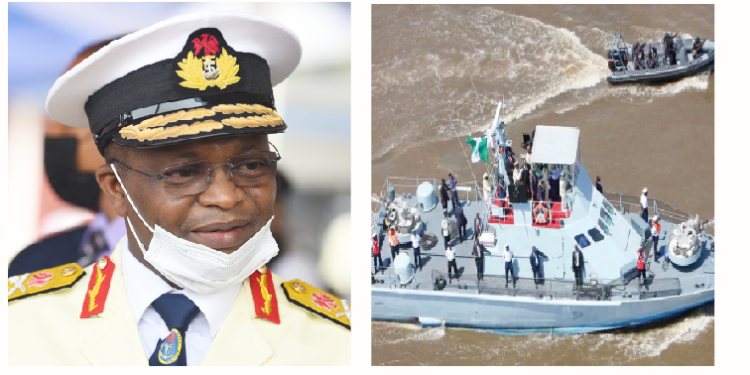 Nations all over the world strive to protect the sea/ocean which constitutes about two-thirds of the earth’s surface area and holds the world’s economy.

With Nigeria being a maritime nation with a vast coastline and a maritime domain that is endowed with hydrocarbons and other resources, the sea is essentially the lifeblood of it’s economy, as it serves as a medium for conveying the vast majority of her trade and many vital resources such as oil. Incidentally, the sea is also being exploited by criminals and economic saboteurs, thus, inhibiting national development.

Like most navies all over the world, the Nigerian Navy (NN) was established in 1956 primarily to ensure the attainment of desired national development objectives by ensuring maritime security within Nigeria’s maritime domain and adjacent maritime areas of interest.

Besides manning Nigeria’s maritime space, the nation’s maritime area of interest includes the entire GoG which is about 574,800 square nautical miles spanning a total coastline of 2,874nm from Senegal to Angola which it has done over the years.

On June 1, the Nigerian Navy (NN) turned 66 years, an anniversary that was marked with a weeklong celebration. Starting as the Nigerian Marines, the past six decades plus have been eventful for the service with remarkable reforms and transformations that have seen it emerge as the largest naval establishment in Africa. Perhaps, this makes the commemoration a well-deserved exercise.

Events which marked the anniversary reflected both the outstanding revolutions witnessed by the service in the past 66 years and its leadership role in regional maritime security. There was the International Maritime Conference, themed, ‘Optimising Collaboration for Maritime Security and Socio-Economic Development in Africa’, a regional maritime exercise held in Onne, Rivers State. This was in addition to a cultural night, sports competitions (polo and golf), boat regatta, religious services as well as medical outreach.

During the anniversary, and at the opening ceremony of the International Maritime Conference, President Muhammadu Buhari acknowledged the role of the Navy as the lead agency in the country’s maritime sector, saying that it establishment has developed into a big force to be reckoned with in the global naval community.

Pledging the support of the federal government to ensure that it continues to discharge its mandate professionally and provide leadership to other agencies in the sector, Mr. President noted the role of the force in stemming piracy in the Gulf of Guinea.

From Captain Francis William Skutil, the pioneer Chief of Naval Staff, who headed the service (1956-1958) through Vice-Admiral Victor Ombu , who was in charge when Nigeria transited from military rule to the current democratic dispensation, till the current command, manned by Vice-Admiral Awwal Zubairu Gambo, who took over the reins last year, the NN has not lacked quality leadership and the courage to dare. And the events of the last two years speak eloquently of the service’s commitment to the safety of the country’s waterways.

In March, the efforts of the service to achieve safer waterways were rewarded as the International Maritime Bureau (IMB) announced the removal of Nigeria from its list of piracy-prone countries. The declaration was not an off-the-shelf item. It followed a dogged multi-agency approach with the NN playing a lead role.

Maritime experts attributed the feat to the relentless efforts and innovative methodologies of the Navy to improve security along the coastline. But most importantly is the positive impact of the delisting on the country’s maritime sector and improved confidence in Nigeria’s security apparatus, especially in the international community.

Conveying the decision of the IMB on behalf of Vice-Admiral Gambo, the chief of Policy and Plans of NN, Rear Admiral Saidu Garba, said: “This noble achievement was complemented by the International Maritime Bureau Global Piracy Report of July 14, 2021, which indicated the lowest number of piracy and sea robbery against ships in our waters in 27 years. The report was corroborated by the Defence Web, which noted a further decline in reported cases of piracy and armed attacks against shipping in Nigerian waters.

“I am pleased to notify you that the latest International Maritime Bureau Report of March 3, 2022 shows that Nigeria has exited the IMB Piracy List. This means that Nigeria is no longer on the list of piracy-prone countries. The consequences are enormous and positive for the shipping industry, general maritime commerce and the national economy.”

The reward for hard work, according to a local proverb, is more work. This applies to NN, and its leadership has maintained that it would not rest on its oars as it seeks to build a safer Nigeria alongside other security formations across the country. In fulfillment of Vice-Admiral Gambo’s pledge to protect oil installations, the Navy reactivated Operation Ops Dakatar Da Barawo (translated as ‘stop the thief” in Hausa) in April 2022, in partnership with the Nigerian National Petroleum Corporation Limited.

At the Nigerian Navy Retreat 2022, Vice-Admiral Gambo had told principal staff officers, flag officers commanding and commanders of autonomous units in the Navy to brace up for the onerous task of reducing oil theft across the country.

The CNS said: “Given our present high dependence on oil and gas revenue, the Nigerian Navy is undeniably a major contributor to the economic mainstay of Nigeria. Accordingly, we, as leaders, must deem it a worthwhile obligation to do all that is necessary for securing the nation’s economic prosperity, within the context of the prevailing national political economy and enhancement of our security as a maritime force.

“Contemporary national security challenges demand that leaders at different levels demonstrate requisite superior skills, knowledge and attitude in managing the workforce and resources to meet the organisation’s goals and objectives. There is an intense sense of expectation that the Retreat would see a re-alignment of our attitude with the urgency of the moment and proffer the best behavioural approaches to problem-solving.”

In earnest, the officers have been up-and-doing in combating oil theft with modest successes. For instance, last year, the Navy said 45 vessels were arrested in the year for various infractions while a total of 1,664,628 litres of crude oil valued at N55.1 billion were recovered from criminal cartels in the exclusive economic zone. But the Naval Chief said it is not yet time to celebrate. He said the operatives have a responsibility to achieve zero-level criminality across the creeks, just as falling public revenue could have dire consequences on their efficiency.

The current leadership believes firmly that a strong Navy could only be achieved through consistent motivation and capacity building. Vice-Admiral Gambo also believes that the future of the institution rests on the quality of leadership, meaning that care must be taken to ensure that only the best and most committed rise to the top.

He demonstrated this at the close of 2021 with the decoration of 21 senior officers elevated from commodores to rear admirals, in a ceremony that was attended by the Chief of Defence Staff, General Leo Irabor, who was the special guest of honour.

Indeed, the highest quality of leadership has been on display in the Nigerian Navy all through 2021 and 2022, as the Chief of Naval Staff forges ahead with his vision of delivering positive outcomes in the critical areas of fleet renewal, infrastructural and manpower development.

So far, the year has seen consolidation of some of the gains of 2021. For example, following the induction of NNS LANA, the new Offshore Survey Vessel, into the naval fleet on March 23, 2022, a flag-off ceremony was held to kickstart the systematic survey of Nigeria’s maritime domain, onboard the new vessel, in Lagos.

In March also, NNS OJI, the new locally-built Seaward Defence Boat (SDB), commissioned by President Buhari in December 2021, commenced sea trial at the Naval Dockyard Limited in Victoria Island, Lagos. During the same period, security agencies, including the Navy, took delivery of 14 gunboats donated by the Rivers State Government for deployment in the state, just as Nigeria’s newest warship, the Landing Ship Tank (LST) NNS KADA, was handed over to the Navy in the United Arab Emirates (UAE). NNS KADA began its homeward journey shortly after, sailing through five ports on the way – Oman, Kenya, South Africa, Angola, and Gabon – covering a distance of 8,400 nautical miles, before arriving the shores of Nigeria on May 27 to a heroic reception.

These came just as the Navy flagged off the annual Exercise Obangame Express to run simultaneously with ‘Operation Dakatar Da Barawo’.

In the area of infrastructure, several projects have been commissioned or are nearing completion, across naval bases in the country. These include the Nigerian Navy School of Armament Technology, Kaduna; Navy Logistics College, Kano; Nigerian Navy Centre of Education Training, Ile-Ife; Navy Town, Ojo and the Naval War College, Calabar.

However, experts have stressed the need to checkmate the influx of small arms and light weapons as it has heightened piracy in the Gulf of Guinea.