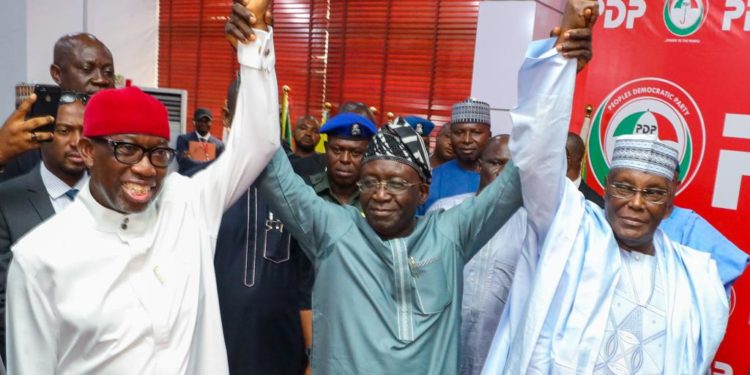 The Movement for the Survival of Izon Ethnic Nationality in the Niger Delta (MOSIEND) has expressed happiness over the emergence of Delta State Governor Ifeanyi Okowa as the vice presidential candidate of the Peoples Democratic Party (PDP).

MOSIEND national president, Kennedy Tonjo West, in a statement made available to LEADERSHIP Sunday in Port Harcourt yesterday, said the group would love governors in the geopolitical zone to close ranks and work together.

West said: “The emergence of Senator Ifeanyi Okowa as the running mate of former vice president, Atiku Abubakar of the PDP in the forthcoming 2023 general election is a welcome development.

“Recall that MOSIEND has consistently advocated for the presidency to be allotted to the South-South. Since we didn’t get that and we are up with vice presidential candidate in the PDP, I mean, it is a satisfactory move.

“Also, recall that PDP had showcased Dr. Ifeanyi Okowa and Barrister Nyesom Wike and the necessary party things were done. As MOSIEND, we are not politicians, we are non-partisan, but we have very vested interest in governance. We have interest in the process, selection and procedure on how best President for Nigeria will emerge.

“We also have a say. As a people from a region, we want our interest pushed, advanced as far as the next government is concerned. Remember, we were not fairly treated in this Buhari-led government.”