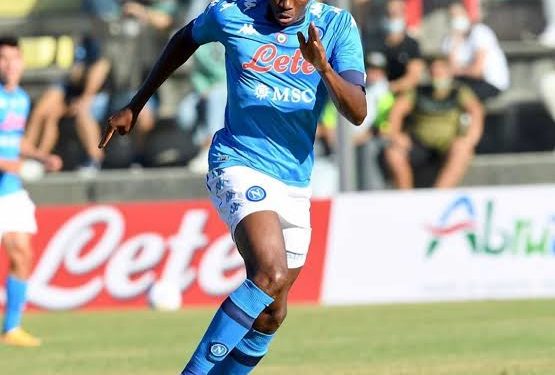 Serie A giants Napoli have revealed that they will stop listening to bids for Super Eagles striker Victor Osimhen from July 8, 2022. .

Osimhen is one of the most sought-after assets in Europe at the moment, following his brilliant returns of 18 goals and six assists in 32 games for the Partenopeans.

Premier League sides Manchester United, Arsenal, and Newcastle are the frontrunners to secure the services of the 23-year-old, but Napoli’s valuation of €100million has been a significant setback for any potential deal.

According to MondoNapoli, the Partenopeans are looking to close the door early on bids for Osimhen, as they have revealed that Napoli will stop listening to offers for Osimhen from the 8th of July.

Asides from it being a way to keep Osimhen at the club for at least another year, it would also ensure stability and prevent distractions in the team ahead of the new season, which begins in August.

Meanwhile, the former Juventus star wants the Bianconeri to sign the Nigerian international.

Alvaro Morata is on his way out of the Juventus Stadium this season and there’s a need for an immediate replacement.

Mohammed Sissoko, a former Mali international, has suggested to Juventus to sign Osimhen as they’d need a player with the spirit of a winner.

Sissoko, according to IlBiancoNero.com said Osimhen is the attacker Juventus need to reignite their title credentials after missing out on the Serie A for two straight seasons.

The Old Lady endured a difficult season under Massimo Allegri as they came fourth behind champions AC Milan, Inter Milan and Napoli.

“He is the right player for Juve, there are other young and strong players but Osimhen is devastating. I hope that Juve will have a strong player and that he will be a champion.”

Osimhen scored 14 goals in 27 league appearances for Napoli and won the best U-23 player in the league.

Napoli have shown reluctance to sell and have slammed a €110m price tag on the Nigerian forward.