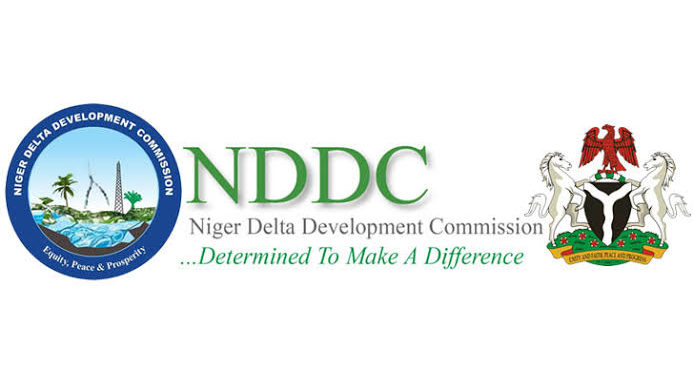 A group, Niger Delta Elders’ Forum (NDEF) has taken a swipe at the sole administrator of the Niger Delta Development Commission (NDDC), Effiong Akwa, and his special adviser, Udengs Eradiri, for what the group referred to as “errant temerity” to state that “the existing Act establishing the NDDC is obsolete”.

NDEF particularly accused Eradiri of saying that the NDDC Act will continue to be implemented in breach until it is amended.

In a statement by its national president, Chief Tonye Ogbogbula, NDEF stated that it considers Eradiri’s latest outburst as an “unwarranted provocation of no mean proportion on the region, an embarrassment to President Buhari’s Government that prides itself for adherence to rule of law that a Federal Government appointee (Udengs Eradiri), which office he occupies in violation of the NDDC Act, will, without equivocation utter such reckless statement that unabashedly rubbishes our nation’s subsisting law – the NDDC Act.”

Ogbogbula noted that worse still, Eradiri “flippantly commented on the forensic audit report of the NDDC, which was submitted to President Buhari on September 2, 2021 stating vaguely that the FG wants to amend the NDDC Act before inaugurating the Board of the NDDC.”

According to the group, by his unguarded comment, Eradiri also “brazenly contradicted and made a mockery of President Buhari, who unequivocally, on June 24, 2021 promised to inaugurate the substantive board of NDDC upon receipt of the forensic audit report, which report he has received since September 2, 2021. President Buhari made the promise to inaugurate the NDDC Board when he received in audience the leadership of the Ijaw National Congress (INC) in Aso Rock, Abuja.”

At that occasion, President Buhari said that ‘‘Based on the mismanagement that had previously bedeviled the NDDC, a forensic audit was set up and the result is expected by the end of July, 2021. I want to assure you that as soon as the forensic audit report is submitted and accepted, the NDDC Board will be inaugurated.”

NDEF recalled that the Ijaw National Congress (INC) has been compelled to describe the delay in the inauguration of the NDDC Board as a “clear betrayal of trust and display of state insensitivity on the Ijaw nation and Niger Delta region.”

Ogbogbula quoted the Niger Delta United Congress (NDUC), as stating that the position of INC “represents the collective position of Niger Deltans, not the subterfuge from a puppet and beneficiary of the current illegality in NDDC who unabashedly sings the deleterious tunes of his paymasters to suppress Niger Deltans and deprive them of the benefits accruing from their God-given natural resources.”

The Elders’ Forum, therefore, wondered on “what authority is Udengs Eradiri making his outlandish statements which have become a huge embarrassment to President Buhari and the Federal Government, a reason why we call on the Federal Government to call him to order and sanction him accordingly, to teach him a lesson and also act as a deterrent to other government appointees who will be tempted to make statements that they do not have the authority to make.”

NDEF also stated that “to educate and enlighten Udengs Eradiri and others like him who seek to confuse gullible Niger Deltans and other Nigerians, NDDC is regulated by its establishment Act which clearly stipulates how the agency should be governed. The ongoing contraption of administering the Commission by a Sole Administrator is a violation of the NDDC Act.”

According to the group, “what the NDDC Act provides is that the Board and Management (Managing Director and two Executive Directors) of the NDDC at any point in time should follow the provisions of the law which states that the Board and management is to be appointed by the President, subject to confirmation by the Senate. In effect, the current Sole Administrator (Effiong Akwa), or his Special Adviser (Udengs Eradiri) are not recognized by the law setting up NDDC, the NDDC Act, and therefore lack the authority, and even moral standing to begin to pontificate on the appropriateness or otherwise of a subsisting law which he and his master currently violate. So, on whose authority and permission is he, an illegal occupier of an office, making such a policy statement affecting an entire region of nine constituent states?”

The group noted that the framers of the NDDC Enabling Act of 2000 made adequate provisions for proper corporate governance, accountability, probity, checks and balances in the administration of the interventionist Commission.

Ogbogbula also drew attention to the reaction of a former Attorney General of Akwa Ibom State, Barr Uwemedimo Nwoko to the above Vanguard Newspaper story, wherein he stated that “the presidency does not have the power to stop executing any provision of an existing Act, which the National Assembly has not amended. They do not have the power, which is why I said it is a violation. Extant laws must be obeyed.”

However, NDEF said it was saddened that what has “subsisted in NDDC for the past two years is that there is an illegal sole administrator who is both Managing Director, Executive Director of Finance, and Executive Director Projects, in clear breach of NDDC Act which ensures separation of these duties to ensure checks and balances.”

The group maintained that the continued administration of the NDDC by an Interim Sole administrator (Effiong Akwa) is “illegal because the NDDC Act has no provision for this illegality as the NDDC Act only provides that the Board and Management (Managing Director and two Executive Directors) of the NDDC at any point in time should follow the provisions of the law which states that the Board and management is to be appointed by the President, subject to confirmation by the Senate. In effect, nobody is supposed to begin to administer the NDDC and utilise the huge funds accruing to it on a monthly basis without passing through this legal requirement as stipulated in the NDDC Act.”

Ogbogbula further remarked that beyond calling Udengs Eradiri to order and “properly sanctioning him for his embarrassing utterances of denigrating the nation’s subsisting law, President Buhari should also be concerned about the disdain of the Niger Delta people over the manner he has handled the NDDC, most especially administering the Commission with illegal interim management/sole administrator contraptions for five years in his seven years in office, and therefore needs to end the ongoing illegality in NDDC if he is to be remembered for good in the Niger Delta.”

The group recalled that recently an APC group, “Committed members of the APC from the Niger Delta Region,” cautioned that “given the various encounters our presidential aspirants had with party delegates from Akwa Ibom, Abia, Bayelsa, Cross River, Delta, Edo, Imo, Ondo, to Rivers states, our party should no longer be in doubt about the mood of the people of the region with regard to their genuine angst towards the Federal Government for the way we have been badly treated by certain elements in the Federal Government who feed fat on the resources of our region.” They specifically pointed out that “as it stands, the APC cannot win an election in the region except the missteps in NDDC are remedied and the NDDC substantive Board is inaugurated in accordance with the law setting up the Commission.”

According to NDEF, “while we restate our condemnation of the flippant outburst of Udengs Eradiri and his boss Effiong Akwa to try and justify the ongoing illegality in NDDC, we align with the demands of authentic Niger Delta stakeholders and urge President Buhari to end the illegal sole administratorship at the NDDC; inaugurate the NDDC Governing Board in line with the NDDC Act to represent the nine constituent states, and thereby ensure proper corporate governance, checks and balances, accountability, transparency, and probity in managing the Commission.”