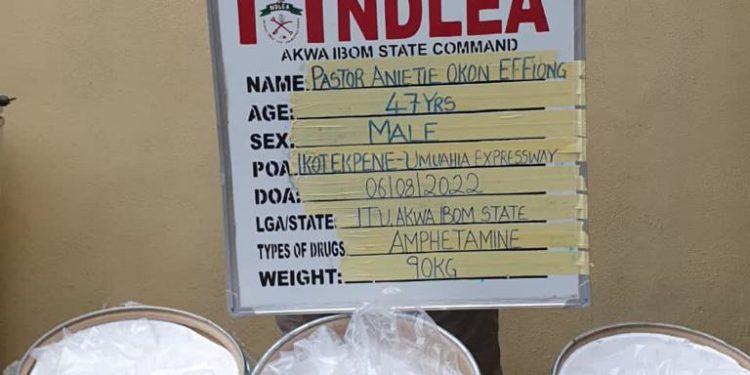 The consignment, believed to have been imported from India, weighing 90 kilograms and loaded into a commercial bus with registration number RSH 691XC at Ojuelegba in Lagos, was intercepted during a stop and search operation along Umuahia – Ikot Ekpene highway on Saturday, August 6, 2022.

NDLEA spokesperson, Femi Babafemi, said the drug packed 30kg in each drum was meant for Pastor Effiong, who was arrested in a follow-up operation at Oron beach in Oron, Akwa Ibom State.

The recovered Meth drums were meant for onward delivery to the Republic of Cameroon.

At the time of his arrest, the suspect was caught with 5.1kg cannabis sativa.

In another development, at the Murtala Muhammed International Airport, Lagos, a 37-year-old indigene of Ovia LGA, Edo State and resident in Italy; Solo Osamede, was arrested for ingesting 41 wraps of heroin.

He was nabbed and taken into custody for excretion while attempting to board a Turkish Airline flight to Milan, Italy via Istanbul, Turkey on Saturday, July 30, 2022.

The swallowed wraps of the illicit drug were recovered in four excretions, which the suspect completed on Monday, August 1.

In the same vein, a female passenger, Jatau Lydia Lami, was arrested at the Lagos Airport for attempting to export 1,700 tablets of Tramadol 225mg concealed in her luggage to Istanbul, Turkey via a Turkish Airline flight on Sunday, July 31.

Preliminary investigation revealed that the suspect, a mother of three, hails from Zango Kataf LGA of Kaduna State and lives in Istanbul, Turkey with her family.

She blamed her action on pressure to raise N5million ransom to free her mother from the captivity of bandits, who kidnapped her since June, 2022.