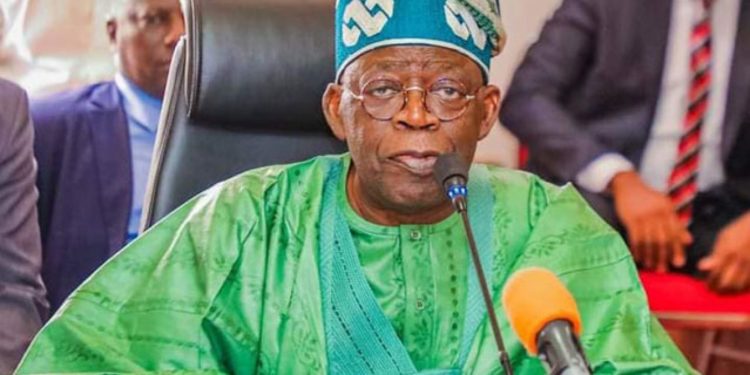 Barely 24 hours to the deadline issued by the Independent National Electoral Commission, the bid to get a running mate for presidential candidate of the All Progressives Congress (APC), Bola Ahmed Tinubu, has been narrowed down to the North East and North West.

While Tinubu and the governing party may likely unveil the party’s vice presidential candidate today, it was gathered that as of last night, interested members from the two geopolitical zones, including state governors, were still engaged in intense lobbying to become running mate to the APC standard bearer.
This is even as the Peoples Democratic Party (PDP) will screen its vice presidential candidate today.

There were also feelers that the APC may have favoured the North East zone to produce Tinubu’s running mate.
A presidency source told this paper that President Muhammadu Buhari and Tinubu yesterday met behind closed doors to conclude on who emerges as running mate to the former Lagos State governor.

LEADERSHIP had reported yesterday that while Tinubu holds the ace in respect of the choice of his running mate for the 2023 presidential election, he has to factor in the position of the governing party, which is to take into considerations all the indices that would promote fairness and unity of the country in his choice of a running mate.
Imo State governor, Hope Uzodimma, had told State House correspondents after meeting with President Buhari that the decision of a running mate lies with Tinubu.
Some of party members scrambling for the VP position in the North West and North East are Kaduna State governor, Nasir El-Rufai; his Kano and Kebbi counterparts, Abdullahi Ganduje; Jigawa State governor, Mohammed Badaru Abubakar and Atiku Bagudu.

Others are secretary to government of the federation (SGF), Boss Mustapha; former Borno State governor, Ibrahim Shettima; former Speaker of the House of Representatives, Yakubu Dogara; former secretary to government of the federation (SGF), Babachir Lawal, and a new entrant, Dr. Ibrahim Bello Dauda.
Dauda, a former secretary of the Buhari Support Group (BSG) and an ally of the president during the All Nigerian People’s Party (ANPP) era, is said to also be in the mix since he is from Congress for Progressive Change (CPC) block.

Dauda, a management consultant from Borno State, is said to have the support of party chieftains, especially the CPC bloc since the New PDP and the ACN have taken the National Chairman and Presidential ticket respectively.
Plateau State governor, Simon Lalong, from the North Central is among those being considered for the VP slot.
There are also unconfirmed reports that the leadership of the APC may have settled for Senator Binta Masi Garba, a former senator as running mate to Tinubu.
She is from the North East and also a Christian who has won elections in Kaduna State as well as Adamawa State.
Senator Garba who was on Channels Television (Politics Today) last night, made a strong case for a female vice president, saying she is ready and qualified to be the running mate to Tinubu.

She noted that it has been her ambition to become the vice president of the country and if the time is now she is ready to do the job, even as she said the APC should give the ticket to a woman, just as she is well ready to be the woman.
If she gets the slot to run with Tinubu in the general election and APC goes ahead to win the election, Binta would become the very first woman in Nigeria to clinch that position.
Tinubu, while reacting to rumours of picking a Muslim as his running mate, had hinted at picking a Northern Christian as his running mate.
Addressing journalists at the APC governorship rally in Ekiti State, Tinubu dispelled rumours of a Muslim-Muslim ticket, saying those spreading the rumours carriers are undemocratic elements that are already threatened by his impending victory in the coming presidential election.
“The VP slot belongs to the Northeastern region and particularly the Christians, but consultations are yet ongoing as to who will be decided,” he declared.
Tinubu assured Nigerians that no group, institution or person can impose a running mate on him.

APC Youths Rally Support For Boss Mustapha
Also, the APC Consolidated Network (APCCN) yesterday made a case for the secretary to the government of the federation, Boss Mustapha, to clinch the party’s vice president slot.

The group, in a communiqué issued and signed by its national coordinator,
Barr Mahmud Afegbua, and secretary general, Engr Sylvia Onu, after the executive meeting in Abuja, argued that Mustapha’s antecedents singled him out among others.

The communiqué stated that the choice of Mustapha, a devoted Christian, as clamoured by APC stakeholders would further boost the candidature of the party’s front-liner, Tinubu, and give the ruling party a higher leverage in the polls.
“We know the person of Boss Mustapha over the years; we are also abreast of his capabilities and political acceptability across the borders. He championed the Presidential Task Force on Covid-19 and the exercise was a huge success. We also commended him for always playing a supportive role in the policies of the Federal Government. His emergence will give APC an edge of emerging victorious in the 2023 general elections.”

Although the position has not been made official, sources at the meeting told LEADERSHIP that Wike emerged a preferred candidate of the majority of the stakeholders at the meeting which was held on Tuesday as the party’s national secretariat.

However, a statement by the national publicity secretary of PDP, Hon Debo Ologunagba, noted: “Pursuant to Part VI, Paragraph 14 of the Electoral Guidelines of our great Party, the Peoples Democratic Party (PDP), the National Working Committee (NWC) has approved the nomination of the following Party members to serve on the Vice Presidential Candidate Screening Committee for the screening/verifying of the nominated Vice Presidential Candidate of our Party for the 2023 general elections.”

Meanwhile, a pan northern group under the auspices of Arewa Youth Awareness Forum (AYAF) has declared its support for the proposed pairing of Atiku and Wike for the election.

The group said Atiku and Wike as presidential candidate and running mate respectively will win the 2023 presidential race without stress.

In a statement yesterday signed by the group’s chairman, vice-chairman and secretary-general, Mohammed Sani-Kabir, Salisu Abdurrahaman and Ben Alege respectively, the group emphasised that they pairing has the capacity to roll back poverty, insecurity, illiteracy and other indices of underdevelopment.

The statement reads in part: “We applaud the choice of Governor Wike whose numerous passionate infrastructural projects in Rivers State have been commissioned by eminent persons across the federation, including our revered Sultan of Sokoto, Alhaji Muhammadu Sa’ad Abubakar.

“In view of deep-rooted economic, security and other challenges of nation-building that the nation faces today, one thing that is more needed than religious and ethnic sentiments is good, impactful governance characterised by mass inclusion and leadership that has capacity to move mountains.”