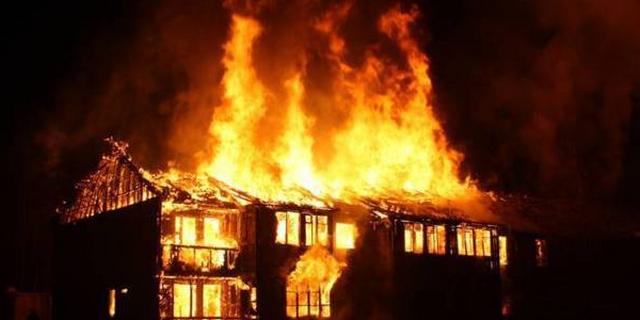 Neighbours have prevented an amputee and petrol dealer, Mr Eke Okorie from jumping into a fire burning his 3-bedroom house which destroyed the property and other valuables worth millions of naira.

The early morning disaster in Ndi Oji Abam in Arochukwu local government area of Abia State which extended beyond the premises of the building was caused by petrol explosion.

“Sadly, the victim, realising that the entire building and other valuables among others have all gone within the short time-frame attempted to jump into the raging fire,” LEADERSHIP gathered.

The fire started when his wife was lighting a stove in their kitchen to prepare breakfast for the family while unknown to her, he was pouring petrol into small containers in preparation for the day’s business.

It was further gathered that the neighbours had turned out in their numbers to stop its spread, but unfortunately it had reached one of the drums containing the product and it exploded.

“The explosion caused fears amongst the neighbours and sympathisers who became afraid as there were other drums and containers stocked in parts of the building that served as his warehouse.

“But when it became imminent that the fire was capable of destroying the nearby buildings and other property, they quickly intervened and thanks be to God that no life was lost,” a source told LEADERSHIP.

According to the source, the victim was amputated following a vehicle accident about 20 years ago and went into the business about 10 years ago to help him sustain his family and dependents.