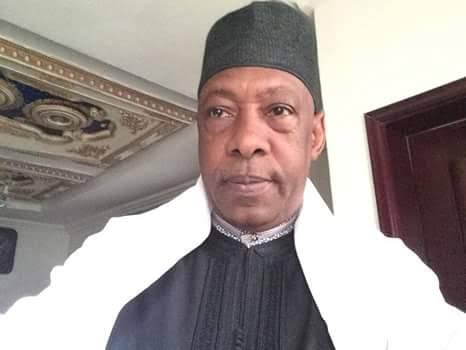 Chief of Staff to the Minister of Youth and Sports Development and Nigeria Football Federation (NFF) presidential hopeful, Alhaji Abba Yola, has urged the congress members of the football body to consider Nigeria first, a roadmap for a fair and free elections, and the importance of the association while meeting on Thursday in Lagos.

Yola in a letter to all congress men and women on Wednesday, urged the delegates to set aside pecuniary and personal gains to seriously consider what is in the greater good of the country, saying the world football family has their eyes and ears on what happens in Nigeria in the next couple of weeks beginning from Thursday’s Annual General Assembly (AGA) of the NFF in Lagos.

While recognising the role of congress men and women in shaping the way forward and prayed for a fruitful and successful congress, Yola said he will wholeheartedly seek to participate in the NFFBpresidential election, for the 2nd time having lost to the incumbent NFF president, Amaju Pinnick, in 2014, if the roadmap is friendly and accommodating.

“Eight years ago, I was with some of you in Warri, Delta State, for the election of our Football Federation President which I had the singular honour and opportunity of participating in as a candidate for the office of the President.

“As God would have it, I with about five others lost to Mr Amaju M Pinnick in a free and fair elections.

“Four years after, we were all in Katsina for a similar exercise. The 4 years election circle, which in my belief will bring the Leadership of Board to its 8 years (2014 – 2022) constitutional tenure, is almost over (with another election coming up in September 2022.

“As preparations are in top gear for another round of Elections in September 2022, I am one of those fervently waiting and praying for a well defined road map for the elections!

“Once the road map is released and turns out to be FRIENDLY and ACCOMMODATING,I will wholeheartedly declare my resolve to participate in the Presidential Election for the 2nd time, In sha Allah!

“As one of those that are saddled with the HUGE responsibility of laying a clean, fair and solid electoral process that will usher in,a strong, vibrant and transparent Nigeria Football Federation once again, I cannot but urge you to do just that for the good of the game and our country,” Yola said in the letter to NFF congress members.