by Yusuf Babalola
in News, Business
0 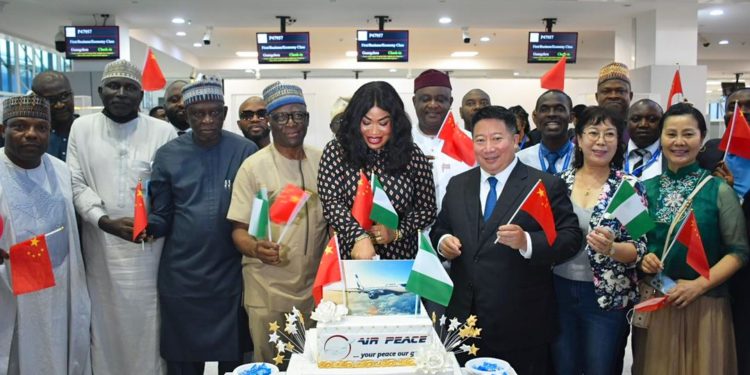 The trade relationship between Nigeria and China has received a massive boost with the introduction of commercial flight operations by indigeneous airline operator, Air Peace, into Guangzhou in China.

Air Peace had on Wednesday, expanded its network to Asia with the commencement of a direct one-weekly flight into China

The flight which left at about 22:00 had a total of 240 passengers which were carried out from the newly commissioned terminal directly to China through its Boeing 777 aircraft.

The company also noted that plans were underway to connect Beijing, Shanghai and other cities from Nigeria, utilising interline arrangement with an Asian airline.

Speaking during the inaugural flight, Air Peace Chief Operating Officer, Oluwatoyin Olajide, stated that the company had envisaged an airline that would predominantly create massive employment for Nigerians and reduce the burden of air travel for Nigerians, and by extension, Africans, through the provision of affordable and peaceful connectivity across cities and continents.

She said: “Now, we can confidently assert that Air Peace has kept to this vision of providing seamless connections and expanding existing network to accommodate the evolving air travel needs of the flying public. Today, we’re officially adding the continent of Asia to our network of continents, with the commencement of initial one-weekly flight to Guangzhou-China.

“If you’ve been following the growth of Air Peace, you’ll be familiar with the fact that the Chinese airspace is not new to us, as we’ve successfully operated several evacuation/special flights to the country at different times in the past, especially in 2020, during the COVID-19 lockdown.

“So, we’re going into China, not as newcomers, but as an airline that is technically and operationally acclimatised with the Chinese terrain. The flying public, especially those that fly the Guangzhou route, should expect best-in-class flight experience, which is characteristic of the Air Peace brand.

“We are not stopping with Guangzhou- India is next and Israel is in the works. Also planned for subsequent launch are Malabo in Equatorial Guinea and Kinshasa in the Democratic Republic of Congo.

“We will continue to grow our route network as well as modernise our fleet strategically. Air Peace currently boasts of a network of twenty domestic routes, seven regional routes and two international destinations, including Dubai and Johannesburg.”

Olajide, who acknowledged the role of government agencies as well as Aviation Ministry in acheiving the feat said the frequencies will increase as soon as the Chinese authorities relaxes its COVID-19 restrictions.

According to her, the flight will deepen relationship between Nigeria and China even as she said both countries will benefit massively from their direct flight operations.

She said, “today, we are launching our first direct scheduled flight into China. If we look at the population of the Chinese in Nigeria and the project they are handling for Nigeria then we can imagine the impact it’s having on the economy. So, if we will be having a direct flight between Nigeria to China, it will strengthen the bond between the two countries and will also increase revenue generated from the connections of the two economies.

“This is a relationship Airpeace has been able to cement and then make the union huge benefit to be the country. The reason while it’s a weekly flight is because of the COVID restrictions but definitely, we are hoping for more frequencies as they relaxes the protocols.”

She added, “As we kick off the Guangzhou route today, we must appreciate the Nigerian Civil Aviation Authority, NCAA, Federal Airports Authority of Nigeria, FAAN, the Ministry of Aviation, the Chinese government, our partners, and other stakeholders for making this possible. We promise to work harmoniously with all relevant aviation actors to ensure this new route is maximised.”