by Abdullahi Yakubu
in Business, News
0 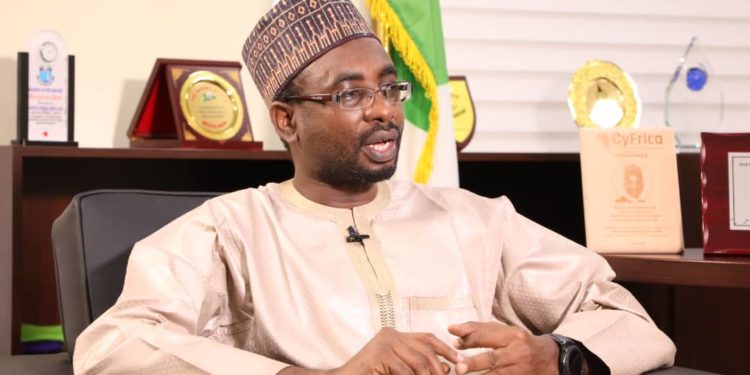 The director general and chief executive officer of National Information and Technology Development Agency (NITDA) Kashifu Inuwa Abdullahi has said that it is high time Nigeria shift to Technology as a key driver to the nation’s economic drive.

The DG made the disclosure during the passing out ceremony of 1353 students graduates trained by the Engausa Digital Literacy hub in Kano in Collaboration with NITDA.

According to DG Kashifu, the young men and women have received good training on how tot operate Computers and other digital appliances and it will help them to stand firmly on their feets.

Kashifu posited that having people who have not been to conventional School to train as Computer operators is indeed a significant development towards the attainment of self reliance.

He said having something doing among the youth would reduce unemployment Poverty, starvationn among the teeming unemployed youths in the country.
He said, “it is unfortunate that the situation we found our selves, in the Country where teaching and learning are carried out through strictly based on the usage of English language is making things difficult for our youths to comprehend what Computer is all about.
Kashifu stated further that most of the technologically advanced nations like France, Japan, India, China use their Mother’s tonques to teach their young Scientists when will Nigeria join the que. He queried.
The DG said how on earth can a student pass his exams with flying Colours in all the subjects he sat for but would fail to secure admission into any of the area of studies in our Universities just because he or she has deficiency in English.
In fact it is high time the government should look critically into that and find a positive solution for the up coming generations.
The DG said there are uncountable highly talented scientists young Nigerians that are roaming the street with their just because they couldn’t passed their English for academic pursuit.
Speaking earlier Engineer Auwal Ringim the Proprietor of Engausa Digital Litracy said today’s event where one thousand three Hundred and fifty five young men and women graduated with specialisation on Computer programming is a very encouraging development.
Ringim a said the reason why he introduced the training on Programming, Video Editing, Blogging, Graphic Designs, Web Design, and Android development, Social Media Literacy, and Digital Marketing, is to identify natural talents from among our brothers and Sisters who have not been to Conventional Schools to be skill full on Computers so as to fend for themselves.

7 Incredible Health Benefits Of Strawberries And Why You Should Eat More... Click Here For Details
Tags: NITDA
SendShareTweetShare
Previous Post