by Julius Ogar
in Opinion
0 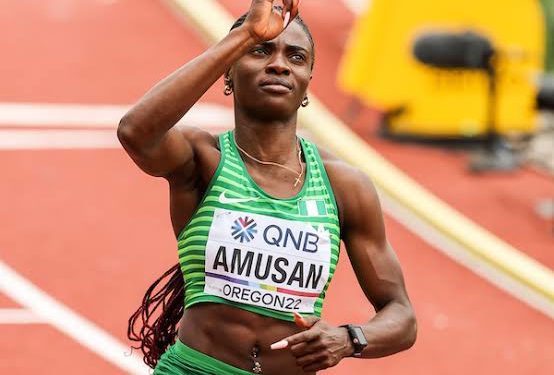 We’ve been basking in the sun of late, despite the litany of woes and sad news predominating the media space. The Nigerian national anthem and along with it, the national flag, has hit the headlines and hugged the klieg lights too many times recently.

Every Nigerian is proud, except perhaps, the children of anger for whom nothing about Nigeria is good or pleasant. There are perennial pessimists who see or hear nothing good and who run down the country as a pastime. One may not blame such people for such a gloomy outlook because of serial disappointments we all have suffered. But is that enough imprecate curses on one’s own homeland?

For the rest of us who don’t enjoy such self-flagellation as citizens of this great but struggling nation, there has been much cause for rejoicing and national pride.

It all started with Tobi Amusan at the World Athletics Championships in Oregon, United States. Many of us were oblivious that such a competition was going on until Tobi left her competitors and pundits gasping with consternation.

Doubters followed her shadow to the Commonwealth Games in Birmingham, United Kingdom wanting to confirm that her record-breaking performance in the US was a fluke. She shamed them all, draped the flag and mounted the podium for the anthem several times again.

There’s this other anthem – a work of art with a distinct Nigerian flavour, which is becoming the hymn and chorus in discotheques and social circuits. It is a sizzling Nigerian export wafting across the continent and to the world. The rave of the day is buga.

Music acts, Kizz Daniel and Tekno must be swooning at the success of their chart-bursting single. In this season of pear, corn and groundnuts, buga is breaking records more than roast corn and pear. To my mind, the only rave that could have competed equitably with buga – at a time the world knew next to nothing about MP3s or YouTube channels and downloads, could have been Prince Nico Mbarga’s Sweet Mother or Yvonne Chaka-Chaka’s Thank You Mr. DJ.

By online video evidence, the buga music and dance – a disco caper that culminates in squared shoulders and extended or crossed arms signifying defiance and triumph – has become a favourite of the Liberian President, George Weah.

Radio playtime, video skits, public announcements, weddings, parties and all social gatherings are incomplete without buga blaring from the sound systems. It is almost a default signature tune for amateur videos on Facebook, Instagram and Tik-Tok; a ring tone in many phones; almost even a lullaby. The radical, the conservative, the freaky, nearly everyone is humming, singing or shuffling to the buga refrain: go low low low low low consciously or subconsciously.

And go low low low low low…! Amusan, Brume and other compatriots went to Birmingham to snatch away many karats of gold under the Nigerian banner. It’s worth all the excitement it brought. Not since Atlanta 1996 Olympics has such infectious buga spirit been felt across Nigeria and by Nigerians elsewhere.

By the way, go low low low low low sounds like ululation in my village. Those celebratory outbursts from women heralding a new birth, an achievement or something extraordinary and exciting – long before eyewitness accounts are heard.

It’s a winning season and buga the winning single is in sync with Arise o compatriots, the winning anthem. That is the buga spirit, defiance and triumph, quite unlike denge pose – another rave which titillated many Nigerians in the early 90s with a humbling message. I didn’t set out to analyse music because I would make a poor job of it.

Like the buga song and dance, Nigeria’s athletes have been wearing the spirit of triumph and defiance in international competitions of late. Triumphal against the many odds we all know, they mounted the podium for the official national anthem, flying our flag with pride and ecstasy. And then they do the intermittent buga pose in a manner that even Usain Bolt’s lightening symbol seems like a poor imitation in its originality.

The Nigerian anthem is heralding new world records, commonwealth records, continental records and the standard bearers are defying the odds with marvelous triumphs. Who says we are all about yahoo, bandits, bad leaders, bad followers and nothing more?

By the way, I understand “buga” is a Yoruba word meaning to unapologetically flaunt one’s successes or achievements. In other words, it means “show-off”. And Nigerian athletes are showing off medals from hard work, training, dedication, endurance and sacrifice.

Some killjoys went to the rent-free social media to improvise reasons at short notice for why Tobi shed tears on the podium in Oregon as she sang the national anthem. They volunteered to explain on her behalf that she cried in regret at being a Nigerian. Nigerians begrudging Nigeria its successes. I almost blushed with shame. Fortunately, the anthem played on from Oregon to Birmingham and elsewhere besides.

The default position is to expect Nigeria to not do well in international competitive sporting events. But just when the air is saturated with bad news and tragedies, Nigeria’s sporting ambassadors unleashed a wave of optimism and hope, a kind of silver lining in a dark cloud.

The routine, most times has been to put up an appearance – an end in itself for sports officials outnumbering athletes in the quest for travel allowances and estacode, while the sportsmen dissipate energy fighting for legitimate allowances and many incongruities. This time, issues about poor preparation, unpaid bonuses and what not paled to the background.

Nigeria finished top of Africa and seventh overall with a medal haul of 35 viz:12 gold, 9 silver and 14 bronze. The games which ended August 8, was Nigeria’s all-time best performance at the Commonwealth Games with five new records set – one world record, and four games records. It doesn’t even seem to matter that all the 12 gold medals were won by women.

Goodness Nwachukwu broke her own previous record of 33.35 meters in the discus throw to haul the disc 36.56 meters, a new world record.

The trouble with Nigeria, in addition to late Prof. Chinua Achebe’s theses and treatise, is that many citizens have become dyed in the stereotype of negativity. The airwaves and newsstands are mostly brimming and overflowing with stories that kill even hope. We’ve practically sold our country to the definition of news – if it bleeds, it leads.

And I say proudly to walls, trees and rocks – if killjoys don’t want to hear – that the snoring giant is stirring, and shall awake! Proudly Nigerian!