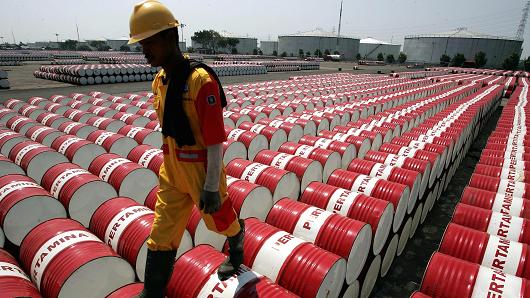 Nigeria’s petroleum imports has currently outweighed the value of its petroleum exports to the tune of $43 billion, according to report.

This is coming as the Budget Office revealed that Nigeria’s debt has exceeded its revenue in the first four months of the year despite high oil prices.

Nigeria, unlike other crude oil producers, has found it impossible to reap the benefits of today’s high oil prices, with oil revenues coming in 61 per cent below target during the period. That’s despite crude oil trading at highs not seen in years.

The country’s crude oil production was relatively steady at 1.376 million bpd in the first quarter of this year compared to the previous quarter, according to the Organisation of Petroleum Exporting Countries(OPEC’s) Monthly Oil Market Report, and 34,000 bpd below the same quarter last year.

The federal government has continued to battle oil theft, pipeline vandalism, and most critically, high petrol prices, which the country subsidizes.

The severe revenue shortfall does not allow Nigeria to service its debt as the cost of petrol subsidy will be about 10 times what it had originally budgeted.

This was revealed by president Muhammadu Buhari in an April letter he shared with the National Assembly.

In the letter, Buhari noted that the cost of that subsidy is expected to be just south of $10 billion.

Unlike other major oil producers that have benefited handsomely from higher crude oil prices, Nigeria has negligible refining capacity, forcing it to import nearly all of the gasoline it consume and the government pays today’s high costs for the petrol while continuing to sell it onto the consumer for much less in order to keep prices at 39 cents.

Banks, OPS To Brainstorm On Synergy For Economic Growth

Banks, OPS To Brainstorm On Synergy For Economic Growth