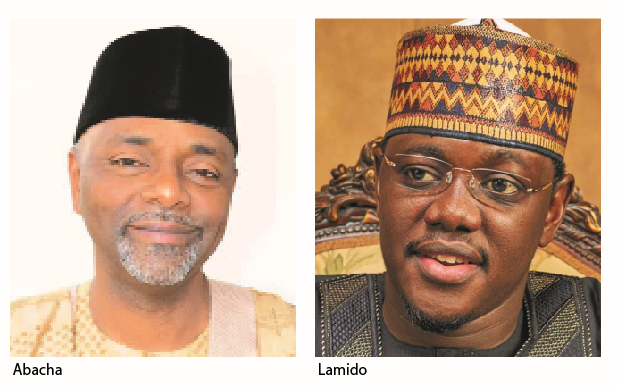 A record number of politicians had their children or close family associates participated in the 2022 party primaries for various elective offices ahead of the 2023 general elections.

Many of the politicians who are still in power or are confronted by fading legacies see their offspring as a way to maintain their influence in the political arena but have met varying degrees of success in the party primaries, while they are yet to face the electorate in the general elections.

The growing trend has raised concerns from Civil Society Organisations (CSOs) in Nigeria who say leaders pushing their children to contest for political offices even when they are still in office affects election transparency.

According to the CSOs, the leaders can’t resist the temptation of influencing the process to the advantage of their children.

Adam Namadi, son of former Vice-President Namadi Sambo who contested for the Federal House of Representatives in the platform of the Peoples Democratic Party (PDP) secured just two votes despite reportedly giving delegates the sum of N2 million each, which he was also reported to have collected back after losing the primary to an incumbent member for Kaduna North Federal constituency, Samaila Suleiman.

A chieftain of the party who prefers anonimity said, it was not a surprise that he lost because his father even as a serving vice president lost his polling unit in one of the elections.

Suleiman, who recently decamped from the ruling All Progressives Congress (APC) to the PDP, won with 22 votes against Shehu Usman ABG who polled 14 votes, leaving Adams Namadi Sambo with just two votes.

Hon. Suleiman, who is the Chairman, House Committee on Special Duties, left the APC following the interest of Governor Nasir el-Rufai’s eldest son Bello el-Rufai in his seat at the green chamber.

Bello El-Rufai, son of Kaduna State Governor, Malam Nasir el-Rufai, would go on to win the Kaduna North Local Government House of Representatives primary on the platform of the APC unopposed.

Across the country in the southwest, Babajide Obanikoro, a sitting member of the House of Representatives and a son of Musiliu Obanikoro, a former minister of state for defence, lost the APC ticket and his attempt at getting reelected to Oyekanmi Elegushi, brother to Oba Saheed Elegushi of Ikate Kingdom by two votes.

Obanikoro got 23 votes to Mr Elegushi’s 25 votes at the primaries held at the Iru Victoria Island Local Council Development Area in Lagos.

Olumide Osoba, son of a former Ogun State Governor Olusegun Osoba of the APC wasn’t as unlucky as Babajide Obanikoro. Osoba won the party ticket for the House of Representatives seat for the third time, increasing the possibility the Osoba’s could build a political dynasty in the future.

The vice-presidential candidate of the opposition People’s Democratic Party, Governor Ifeanyi Okowa of Delta State is not the only member of his family seeking more glory at the ballot. Marilyn Okowa-Daramola, won the Ika North East federal constituency ticket of the PDP.

Not every member of Nigeria’s ruling elite is however satisfied with their sons and daughters aspiring to be members of the House of Representatives or even the Senate. They are gunning for the seat of governor.

The politicians strategizing on how to grab power at all levels for their sons featured prominently in the party primaries held recently in Kano and has even become a source contention with the threat of litigation.

The eldest son of a former ambassador, Aminu Wali, a strong party chieftain contested and won the governorship ticket of the PDP in Kano. Sadiq Wali was the Commisssioner for Water Resources in the government Abdullahi Umar Ganduje.

But then PDP is factionalized in Kano and the party leadership didn’t recognize the primaries conducted by the Aminu Wali faction. INEC however does and this can only be resolved in court.

On the other side of the aisle is Mohammed Abacha, son of late Head of State General Sani Abacha. Mohammed Sani Abacha was said to have contested and won the Primary Election under the faction of party chairman Shehu Wada Sagagi.

In the People’s Redemtion Party (PRP) a former special assistant on media and communications to Gov. Ganduje, Salihu Tanko Yakasai also wants the governorship seat. He happens to be the son of Tanko Yakasai, an octogenarian and one-time special adviser on political matters to late President Alhaji Shehu Shagari.

It was only Namadi Sambo’s son that experienced a spectacular loss at the primaries. Others also had the dreams of the fathers cut short. The PDP in Bauchi, firmly in the hands of Gov. Bala Mohammed stopped Ahmad Muazu, the son of Ahmad Adamu Muazu, a former governor and chairman of the party at the national level in his attempt to contest for the governorship ticket.

The party in the state said Muazu did not follow due process to obtain the party’s 2023 governorship nominations and expression of interest forms.

Speaking to our correspondent, Yayanuwa Zainabari, publicity secretary of the party in Bauchi said the national body did not send the name of the former governor’s son as a contestant for the 2023 governorship ticket.

He said the governorship screening committee sent to the state did not present the name of Ahmed as a contestant, adding that it was the national body of the PDP that sold the forms.

Having your son as governor is very tantalizing. Reasons have been adduced to why former Governor Dalhatu Bafarawa of Sokoto state failed to secure the PDP governorship ticket for his son, Sagir Bafarawa.

Though, he was later selected as the deputy governorship candidate, a party stalwart, Alhaji Yusuf Mainasara, listed his lightweight political exposure and experience as part of reasons why the young Bafarawa failed in his governorship bid.

“Aside his brief stint in the banking sector, Sagir could not muster enough votes to win a federal House of Representatives seat before Governor Aminu Waziri Tambuwal made him relevant when he appointed him Commissioner for Environment,” Alhaji Mainasara said.

Idris Abiola-Ajimobi, son of late former governor Abiola Ajimobi of Oyo, also won the emerged the APC  for Ibadan South-West II State Constituency. He emerged as the consensus candidate at the party.

Olamijuwonlo, had previously served as the chairman of Ogbomoso North local government area.

Ibori-Suenu polled 46 votes to defeat Igbakpa, who scored 22 votes at the a rerun primary for Ethiope federal constituency.

A handful aspirants have raised concerns about how they were schemed out of contention or simply denied the opportunity to compete in a fair and transparent process during the primary process. This is what has caught the attention of Civil Society Organisations.

The CSOs speaking through their leader, Awwal Musa Rafsanjani,  said some leaders in Nigeria have been abusing their privileges and offices just for their children to go into political offices.

“It is part of abuse of office by people in government to use the advantage of their positions to suppress other qualified and competent aspirants,” Rafsanjani said of leaders who push their children into political offices.

“Abuse of public power is tantamount to wrongdoing. You are a minister, governor or a senator, then you position your children to take over power from you without a transparent process. If the process is transparent and competitive and fair to every category of Nigerian, that is not a problem.

“But in situations where you technically scheme to qualify people out to favour your child or relation that’s where we have problems and it stands condemnable.

“There is no way you can claim to have fair elections because you are using the same government privileges to the advantage of your children. Once the party primary is concluded, whatever they present for the general elections, that is what people will choose from.

“If the party primary is not done transparently, you have already mortgaged the popular views and aspirations of the people, ” Rafsanjani added.