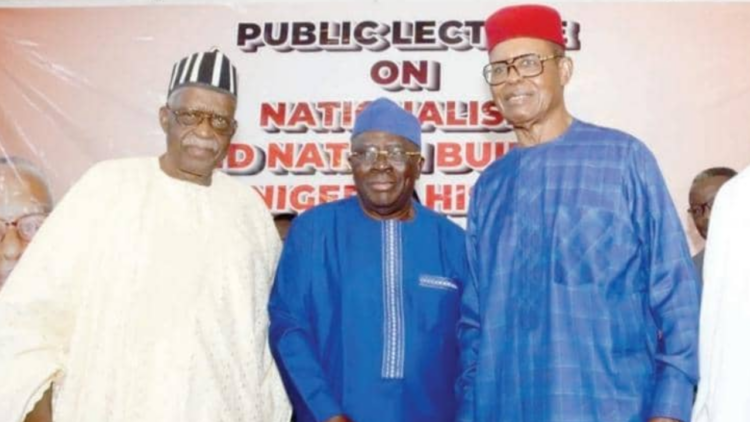 The debate on whether the unity of Nigeria is negotiable came up for discussion yesterday in Lagos with elder statesmen from three regions of the country insisting that the country must re-negotiate its unity to overcome its current crises.

The elder statesmen, who spoke on the issued, included the president-general of Ohanaeze Ndigbo, Prof. George Obiozor, the spokesperson of the Northern Elders Forum (NEF), Hakeem Baba-Ahmed and the acting leader of the pan-Yoruba socio-political group, Afenifere, Chief Ayo Adebanjo.

They asserted that it was time for Nigerians to sit down and re-negotiate the continued survival of the country.

The frontline leaders spoke at a public lecture titled: “Nationalism and Nation Building in Nigeria History” organised by Ohanaeze Ndigbo, which was delivered by Prof. Jide Osuntokun.

In his opening remarks, Obiozor said none of the past leaders of the country had been able to create an atmosphere of credibility to ensure Nigeria’s claim to a political future as one nation.

He added that none of the leaders was also able to evolve a unifying national ideology that was embraced either by the majority of fellow political elite or by the entire Nigerian populace.

The retired professor maintained that statement by some political leaders that, “Nigeria’s unity is non-negotiable” is an irony because they seem to have forgotten the country’s history or had failed to learn the lessons of history in general.

He said, “Nigerian unity is negotiable and must be re-negotiated for it to stand or survive the test of time.

“The reality over the years remains that despite the best efforts of all our leaders, past or present, Nigeria’s unity is not guaranteed. It is simply, at best, an aspiration and not yet an achievement. Consequently, the statement that Nigeria’s unity is ‘non-negotiable’ is simply a historical fallacy.

“If we are to salvage our country, we must begin to face reality, stop the syndrome of self-deception and self-delusion about Nigerian historical exceptionalism. Today, if the truth must be told, our diversity has turned into disorder, and our democracy into an invitation to incremental anarchy,” he said.

On his part, Baba-Ahmed said a country is strong as a nation to the degree it teaches its young ones its history.

He said, “I teach students history and policy and I wonder who are those that say that Nigeria’s unity is not negotiable, definitely, they are not from the North and I can tell you they are not affiliated to the Northern Elders’ Forum.

“Nigeria’s unity is negotiable and you either negotiate it or we will continue to manage the crisis because nations are very fragile or delicate living things and you have to nurture them and pay attention to their weaknesses and strengths from time to time or they break. We are at a breaking point.

“Anybody who takes the unity of their country as non-negotiable is not talking about a human entity created by human beings.

“It is only the military that would say that the unity of Nigeria is non-negotiable and the military is employees of the Nigerian people and tell the Nigerians who employ, train, mandate and pay them how to run the country.

“As it stands now, it is either we negotiate the Nigerian future in the next few years or we allow what is beginning to look like we will have to fight our way out of it to gain more grounds.

“I come from the North and I represent a group that speaks for the north, I say we must negotiate it but when we do, it must be on very clear and well-spelt out principles. No part of this country is without grievances and frustrations. Every part of the country can bring something to the table and say, “I want you to look at this and everybody must listen to them.

“He also said that the North has not endorsed any candidate nor is it planning to endorse anyone, but that the region would provide a level playing ground for all the 18 listed candidates for the election,” he said.

Similarly, Adebanjo insisted that what Nigeria needs is sincerity and honesty in its approach and not lip service to one Nigeria.

He said, “Thank God, Baba-Ahmed is here, your boss Ango Abdullahi made a statement in 2014 that when they get back the presidency they will have it to keep and he has not denied that.

“And you too have said that the East must come and negotiate because politics is a game of numbers, but my position is that the case of the East is not a favour but that of a right.

“Any time I hear them say they should come and negotiate, I say what kind of negotiation is that they say it is because of their population, what population is that? A fraudulent population?

“Unfortunately, some southerners have been brainwashed that they cannot do anything unless they bow down to the North. I don’t believe that.

“What right does the north have to dictate who our president should be? We were brought together not by peace and not by agreement but we were forced to live together by the British. So for us to continue to live together in peace it must be on agreeable terms.”

The Afenifere leader also said his organisation’s adoption of Peter Obi is on principle and not because of any sentimental reason.

He said, “I made Tinubu the Governor of Lagos State and I will have wanted him to be the president but this is not about the Yorubas, we don’t believe in dishonesty, that would be cheating. Obasanjo has served our own.

The lecturer (Osuntokun) said in his paper that since 1966 Nigeria has struggled to find a modus operandi of ruling a multinational state, balancing the regional desire for autonomy under an overarching national structure.

He said that the search for modus vivendi, unfortunately, led to the disastrous civil war in which some millions of Nigerians predominantly Igbo people died between 1967 to 1970.

The professor of history further stated, “one would have thought Nigeria had learnt a bitter lesson from our recent history but the contrary is the case, several unviable states by the whims and fiat of the military rulers who have dominated the politics of Nigeria for years, have been created thus miniaturizing the power of the constituent states and increasing the power of the centre while still masquerading as a federal state.