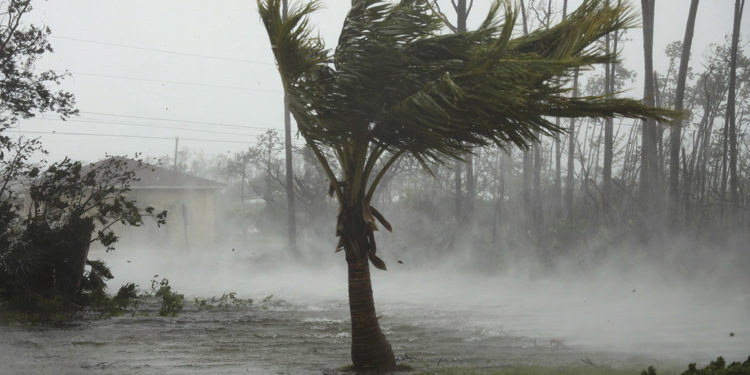 CORRECTS FROM CANAL TO ROAD - A road is flooded during the passing of Hurricane Dorian in Freeport, Grand Bahama, Bahamas, Monday, Sept. 2, 2019. Hurricane Dorian hovered over the Bahamas on Monday, pummeling the islands with a fearsome Category 4 assault that forced even rescue crews to take shelter until the onslaught passes. (AP Photo/Tim Aylen)

The agency also said above normal rainfall conditions are expected over the northern states such as Sokoto, Zamfara, Katsina, Kano, Jigawa, Yobe, Borno, Bauchi, much of Kebbi and Gombe, as well as northern Kaduna and Adamawa states in the next three months.

This situation could lead to flooding in such areas if the drainages are not properly cleared and managed.

Furthermore, the agency’s prediction showed that southwestern states like Lagos, Ogun, Osun, much of Oyo, Ondo, parts of Ekiti, and Edo states will experience normal to above rainfall in the period under review, while normal rainfall conditions are expected in the central states, most of Kaduna, Adamawa, Edo, Ekiti, Oyo, parts of Bauchi, Gombe and Ondo states.

Normal to below normal conditions are expected over the south-south and the inland states such as Bayelsa, Rivers, Akwa Ibom, Cross River, Abia, Imo, Anambra, Ebonyi and Enugu states.

The DG also pledged that NiMet will continue the “monitoring of rainfall events across the country;  Forecasting of various rainfall events on different time scales and lead times; Provision of early warning products and services (SCP, Impact-Based Forecasting); Timely dissemination of vital information and advisory services on weather and climate related events and constructive engagement with all relevant stakeholders for adequate uptake and utilisation of weather, water and climate information.”

He further advised state and national emergency management agencies to intensify adaptation, mitigation and response mechanisms from now on.

Also, states that are expected to experience varying degrees of flood episodes are advised to begin their awareness campaigns through field extension workers for possible response activities especially at the high-risk areas.