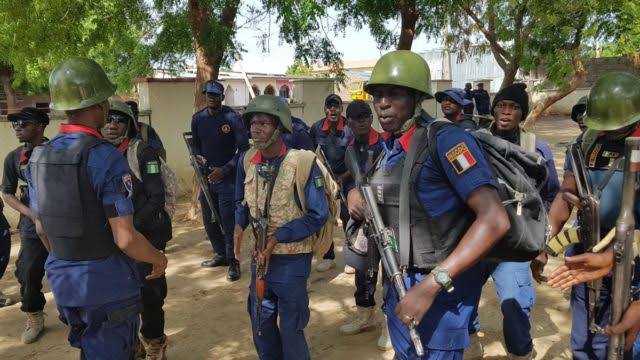 Four suspects were arrested and four short trucks were recovered after they were seen conveying illegally refined petroleum products at Ekewen village in Eredo Local Government Area of Edo state.

The Corps, director, public relation’s DCC Olusola Odumosu, the arrests followed an intelligence tip-off that illegally refined AGO from Warri Delta states is being brought by sea to Edo state and later being trans loaded into trucks before being conveyed out for distribution to different part of the country.

He said, “The River bank is used for this illicit activity in Edo state and the perpetrators are being given heavy military protection to trans load this illegally refined AGO from boats to trucks and these trucks do pass in front of Ekewen Army Barracks, Benin.

“Our team had a night stop over at Benin(Edo state) while on transit to Delta state and successfully arrested four suspects and four short trucks conveying about 15,000 litres each of suspected illegally refined and adulterated AGO in each of the trucks,” he explained.

The four suspects and four exhibits have been handed over to the Edo state command for investigation and prosecution.

In Oyo State, the NSCDC also arrested a trans-border oil syndicate that specialises in syphoning petroleum products from Nigeria to other West African countries.

According to the NSCDC, the group had perfected plans to illegally syphon and export some trucks fully loaded with large quantities of PMS inside drums out of Nigeria, using an illegal land border route located around Irawo Community in Atisbo Local Government Area of Oyo State.

The CG’s Special Intelligence Squad acted and successfully intercepted and arrested two trucks and two suspects opposite H. M Amope Multilinke Ltd, at Oke Oba, Irano Community but one of the suspects escaped at the point of arrest.

The suspects and crime scene have been handed over to Lagos State Command Headquarters, Ikeja for further investigation and possible prosecution, while the illegal oil dump has been sealed off with all exhibits at the crime scene.

This unit is directly under the office of the CG, NSCDC. It was inaugurated on December 1st, 2021, and is headed by an Assistant Commandant of Corps, Dandaura Apollos.

It has recorded a remarkable breakthrough in the war against vandalism and other crimes, most especially in the Niger Delta region.