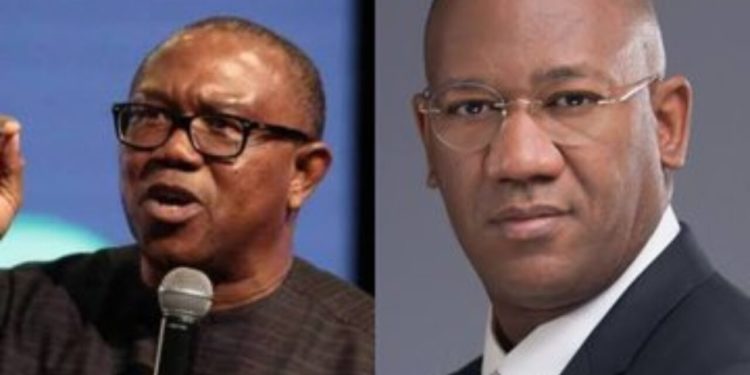 There are strong indications that founder and Pro-chancellor of Baze University Abuja, Datti Baba-Ahmed will be unveiled as running mate to Labour Party presidential standard bearer, Mr Peter Obi, today.

Obi was expected to unveil his running mate yesterday but it was shelved because he was in Maiduguri, Borno State for an event.

Chairman of the Labour Party, Barrister Julius Abure told journalists yesterday that Obi was on visit to Maiduguri and could not make it to the venue due to cancellation of his scheduled flight back to Abuja.

He said the running mate will be unveiled today after Obi would have returned to Abuja.

However, Labour Party and Peter Obi supporters took to social media, especially twitter, to celebrate the likelihood of Baba-Ahmed’s emerging Obi’s running mate.
Indications that Datti Baba-Ahmed, 46, would emerge Obi’s running mate emerged shortly after his elder brother and spokesman of the Northern Elders Forum, Hakeem Baba-Ahmed, disclosed that he had a fruitful interaction with Obi.

Recall that discussions between Peter Obi and New Nigeria Peoples Party (NNPP) presidential candidate, Musa Kwankwaso, over an alliance ahead of the 2023 election collapsed over a disagreement on who would serve as running mate to the other.

Baba-Ahmed was a PDP presidential aspirant in 2019. He was also a member of the House of Representatives between 2003 and 2007, and was elected Senator for Kaduna North, in Kaduna State, Nigeria in April 2011 running on the Congress for Progressive Change ticket.

Okupe has served as a place holder pending the emergence of a substantive running mate ahead of the July 15 deadline.
Disclosing his withdrawal via his verified Twitter handle yesterday, Okupe said he submitted his withdrawal letter to the Independent National Electoral Commission (INEC).

He wrote, “This afternoon I submitted my withdrawal letter from the position of the Vice Presidential candidate of the Labour Party to INEC.

“A replacement will be announced by the national chairman of the party shortly. I feel greatly blessed to have been part of the foundation of success for the Labour Party”.
Recalled that Mr Peter Obi had on June 16 returned his completed nomination form to INEC with Okupe as his running mate.

This was done in compliance with the Electoral Law 2022 and INEC guidelines of the June 17 deadline for the submission of the names of parties’ running mates.

However in terms of withdrawal, the nominated candidate is mandated to write a letter to the political party that nominated him, indicating that he has withdrawn from the race and that must also be accompanied by an affidavit duly sworn to by the said candidate.