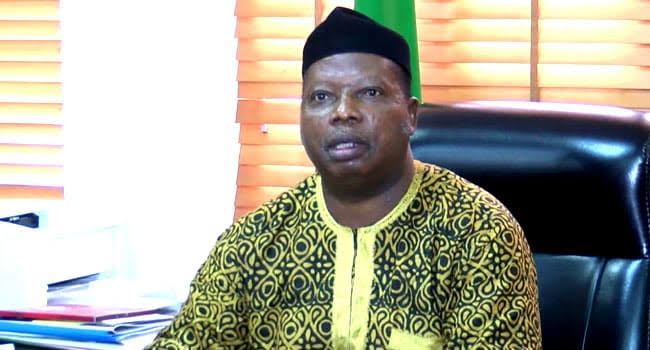 The Ogun State House of Assembly (OGHA), on Thursday, suspended its sitting following the arrest of its Speaker, Rt. Hon. Olakunle Oluomo.

The Speaker was in the early hours of the Thursday arrested by the operatives of the Economic and Financial Crimes Commission (EFCC) at the Murtala Mohammed International Airport in Lagos.

Meanwhile, the Deputy Speaker, Rt. Hon. Akeem Balogun (Ogun Waterside State Constituency), who is statutorily saddled with the responsibility of conducting the businesses of the Assembly in the absence of the Speaker, also could not convene the sitting of the House as at the time LEADERSHIP visited the Assembly complex.

Though there was no official statement from either the OGHA Clerk or any of the Speaker’s aides regarding the suspension of sitting, LEADERSHIP, however, gathered that the suspension of proceedings at the Assembly may not be unconnected with the arrest of the Speaker which caught all members and staff of the Assembly unaware, particularly when the lawmakers normally sit every Tuesdays and Thursdays.

Our correspondent, however, observed an unusual calmness among other lawmakers most of who expressed skepticism over possible arrest of other members of the House.

LEADERSHIP further gathered that EFCC’s arrest of the Speaker may have been informed by his alleged refusal to honour previous invitations extended to him by the anti-graft agency for questioning over some “unholy” deals carried out by the Ogun Assembly under Oluomo’s speakership.

An anonymous source at the Ogun Assembly complex confided in LEADERSHIP that the speaker’s refusal to honour the EFCC’s invitations was premised on the existing litigation instituted by the Assembly earlier in January this year at the Federal High Court sitting in Abeokuta against the anti-graft agency.

It would be recalled that the Ogun Assembly in suit No: FHC/AB/CS/7/2022, dated January 14, 2022 is seeking an order of interlocutory injunction restraining the EFCC from taking further step, “including but not limited to inviting, interrogating, imposing obligations and demanding or requiring attendance of the plaintiffs/applicants in connection with the criminal allegation made against the speaker and some others by an aggrieved member of the Assembly.”