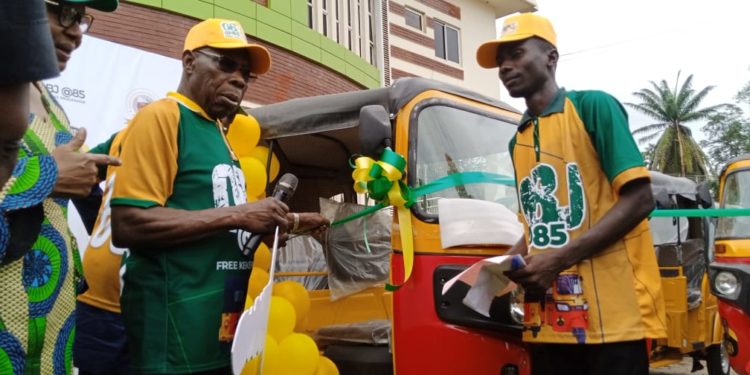 Former President Olusegun Obasanjo yesterday stunned residents of Abeokuta metropolis, the state capital as he engaged himself in picking passengers with a commercial tricycle, popularly referred to as”Keke NAPEP” round some major streets of the metropolis.

Obasanjo, who recently donated 85 units of such “Keke NAPEP” to 85 youths, drawn from across the 36 states of the federation in a continuous celebration of his 85th birthday celebration, was sited picking passengers from the Olusegun Obasanjo Presidential Library (OOPL) end of the MKO Abiola Way to the popular Kuto market in Abeokuta.

The pastime which caught a greater number of his aides unaware was also greeted with a mixture of disbelief and excitement as hundreds of residents of Abeokuta metropolis trooped the streets to catch a glimpse of the former president leading by example of what he preaches.

Speaking with LEADERSHIP Sunday, one of his aides, who pleaded anonymity disclosed that Obasanjo’s action was an indirect way of encouraging the youths, who benefited from the 85 Keke NAPEP distributed earlier in June, 2022 to see greater opportunity for employment in “Kaka” business.

LEADERSHIP Sunday however, recalled that Obasanjo had during his first term on November 6, 2002, under the National Poverty Eradication Programme introduced by his administration launched a 2, 000 units of “Keke NAPEP” with the assurance that the launching would provide gainful employment for about 4, 000 people, aside from the mechanics and spare parts dealers.

It would also be recalled that the 85 tricycles donated to the 85 Nigerian youths were provided by the Youths’ Center of the Olusegun Obasanjo Presidential Library (OOPL), Abeokuta as part of the youths empowerment programme of the Center.

Obasanjo’s surprise presidential tricycle business on Saturday in Abeokuta metropolis, however, attracted scores of residents at every bus stop he stopped to pick up passengers, who all went into excitement, as many passengers rushed to board with him and enjoy a ride in the tricycle that has the capacity of carrying only three passengers.

Meanwhile, the former president, who was clad in a Yoruba native attires with a fez cap, religiously busy himself with driving the “Keke”, while greater numbers of residents, excited by his passion ran behind the tricycle, hailing him

Speaking after returning to the OOPL premises, Obasanjo said he embarked on riding the Keke to demonstrate to the people that there was nothing bad in riding the Keke and using the same for commercial purposes.

He said with tricycles and other small-scale businesses, youths can be self employed and ultimately, become economically independent.

He said when he recently distributed 85 Keke given to young people across the country he received some feedback that made riding keke look like an inappropriate gift, even as some wondered if that was the best for young people.

Obasanjo said, “There is nothing wrong with young people starting small. The Keke is secure and safe when handled professionally and with discipline. In fact, you can plan your business the way you wish and earn income that you can deploy to other investments. And if you can get a second one, you can give that to someone else. So you become self-employed and you have also employed somebody.’’

empowerment of young people through initiatives that can generate employment, saying that is how the country can increasingly address unemployment.

“I have always had a passion for youths, empowerment, and employment. When I started establishing farms, do you think I could run the farm alone?

“The people I employed on the farms, some of them are PhD holders. There are veterinary doctors among them, an Agric economist, and some people that are well educated, some of my children have PhDs and are still working with me.

“The other time I checked the people that are working with us directly on our various establishments, we have over 5,000 and most of them are youths. I have always had passion for youths because there is no substitute for employment.’’