Ondo Amotekun Arrests 6 Suspects Who Hypnotised Victims Before Kidnapping, Others 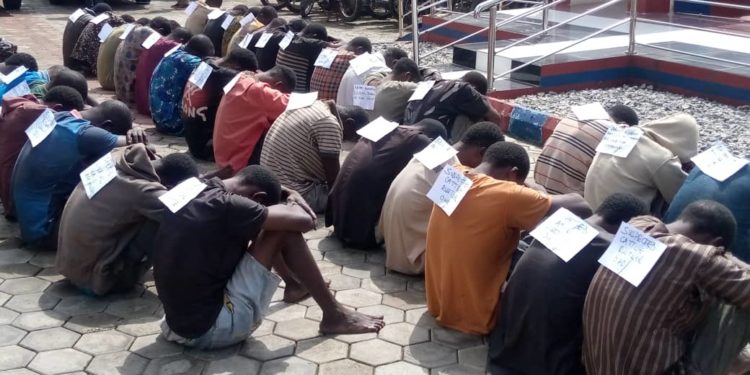 The Ondo State Security Network Agency codenamed Amotekun, has arrested six suspected members of a kidnap gang, who specialised in hypnotising their victims before kidnapping them in the State.

The suspects, who operated in the Odigbo local government area axis of the State, included two females and a herbalist.

According to Amotekun, the herbalist was responsible for fortifying the kidnap syndicate before going on an operation.

The suspects were paraded in Akure, the State capital, on Tuesday, alongside 39 other suspects arrested for various criminal offences ranging from kidnapping, armed robbery, stealing, and snatching of motorbikes.

Parading the suspects, the Amotekun Commander, Akogun Adetunji Adeleye, explained that: “the six-member kidnap syndicate uses spiritual means to hypnotise people they carry on their motorcycles to an unknown destination.

“We have a case of one of them that specialised in killing motorcycle riders and taking over the motorcycle, dismantling and sending out of the state. We tracked him to Ore in Odigbo and we arrested his accomplice and the ring leader escaped to Ogun State. We contacted the Amotekun in Ogun State, who assisted us in apprehending him.

“We also have another group that specialised in the kidnapping. They kidnapped a lady in Ore but we were able to get the victim out alive without ransom and we were able to apprehend the suspected kidnappers.”

Explaining that the suspects will be charged to court after completion of the investigation, Adeleye emphasised that all the security agencies in the state have been properly briefed on the influx of undesirable elements into the State and they were determined to wage war against them.

While noting that Amotekun remains resolute in maintaining zero-tolerance for crime in the state, Adeleye called on the criminals to vacate the state.

One of the kidnap suspects, Mrs Adesanya Folasade, said she only engaged the gang to help her kidnap a mad pregnant woman.

The 45-year-old mother of one explained that she intended to take custody of the baby of mad woman after delivery because she hasn’t been able to conceive after her first child.