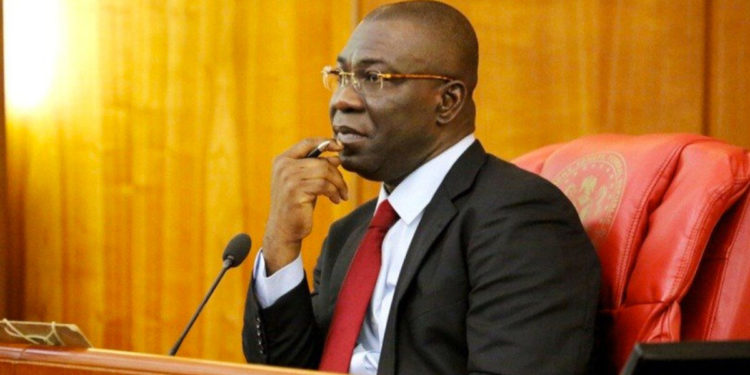 Nigeria’s Attorney General of the Federation and Minister of Justice, Abubakar Malami, has explained reasons why the federal government won’t interfere in a former Deputy President of the Senate, Ike Ekweremadu’s trial over alleged organ harvesting in the United Kingdom court.

When asked about the level of intervention by the Federal Government in the case involving the Senator representing Enugu West in the National Assembly as regards his trial in the United KKingdom, Malami said the federal government of Nigeria has a tradition of not interfering in any judicial matter whether local or international, and would maintain the stand in the Ekweremadu matter.

“It has never been the tradition of the Nigerian government to interfere on anything judicial, local or international. And that stands the position of the government.

“On the issue of intervention on Senator Ekweremadu’s trial. I have stated in the course of my presentation, that there have been in existence, mutual legal assistance requests and collaboration between Nigeria and other countries across the world. So, to this end, I want to state that we will address the request if that there is such a request, both on the part of Senator Ekweremadu.

“I can remember very well, there was a request, which was passed through my office but sealed and meant for delivery to the Crime Agency in the UK at the instance of Distinguished Senator, which request I am not in a position to comment on because what related to my office was a simple transmission.

“In view of the fact that the transmission of international documents is a function of a department central authority unit in the Office of the Attorney General and on the request of Senator Ekweremadu, an agency of government was asked to respond to certain inquiries, they did, and under seal, they presented their report which was transmitted to the UK accordingly.

“So the implication of what I’m trying to state in essence is we have mutual legal assistance understanding with the UK, and whichever of the agencies, either the Senator as an accused or suspect or indeed the agencies in the UK, make any request for international support we will respond accordingly.

“But as far as interest as to the federal government is concerned, it is not a matter over which we can develop any interest. Perhaps maybe, if there are interests, there are interests that should be rooted in law. For example, relating to the child in contention, you know, we have Child Rights Act, among others.

“For example. If there is an allegation of breach, we may possibly consider looking at it from that perspective.

“In case of consular services, there is need for Senator Ekweremadu to be accorded one, in view of the fact that he is a Nigerian, and if the request is made, we’ll look at it on its merits. So, what I’m saying, in essence, is not about a meddlesome interloper, or perhaps maybe just coming into a scene relating to issues that border on crime.

“As you are likely aware, a number of Nigerians were before now convicted across the globe. And then a number of foreigners are equally convicted recently in Nigeria and over time. So, it is about issues that border on crime. If indeed, a criminal allegation is an issue, the jurisdiction determines what happens both in terms of request for support and not for a Nigerian government to simply because you are a high-profile personality you jump into that arena.

“It has never been the tradition of the Nigerian government to interfere in anything judicial, local or international. And that stands the position of the government,” Malami explained.