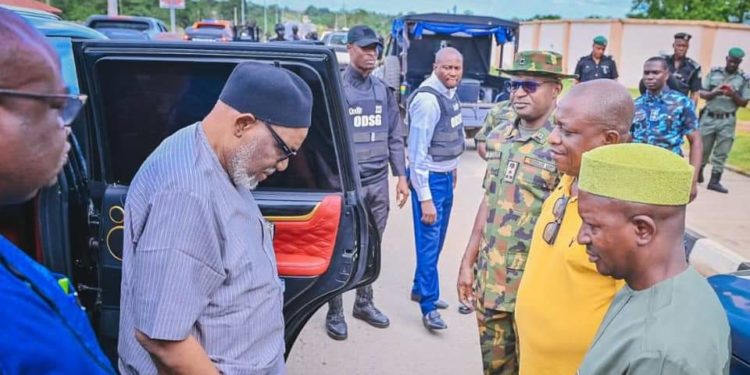 The United Nations secretary-general, Antonio Guterres, has condemned in the strongest terms the heinous attack on St. Francis Catholic Church in Owo, Ondo State, on June 5, even as he urged the Nigerian government to bring killers of the worshippers to justice.

Gunmen attacked the church with bombs and shootings that resulted in the death of several worshippers and injured many others while scores of civilians gathered for the Pentecost service.

The UN scribe’s condemnation was contained in a statement issued yesterday by Stéphane Dujarric, spokesman for the secretary-general in New York, stressing that the attacks on places of worship were abhorrent.

The UN chief also extended his heartfelt condolences to the families of the victims and wished speedy recovery to the injured. He also expressed his sympathies to, and solidarity with, the government and people of Nigeria.

Meanwhile, the Ondo State government yesterday disclosed that only 22 worshippers were confirmed dead in the St. Francis Catholic Church in Owo terrorist attack.

The government further disclosed that a total of 88 worshippers were affected by the attack on the church which occurred during mass on Sunday.

Suspected terrorists had stormed the church, located in Governor Oluwarotimi Akeredolu’s hometown, Owo, and gunned down the parishioners who attended Sunday mass.

Meanwhile, the authorities of the Diocese of Ondo have said 38 persons have been confirmed dead in the attack.

The diocesan bishop, Jude Arogundade, said the church had been able to ascertain 38 victims.

Arogundade added that said some families picked up corpses of their loved ones and such victims could not be accounted for by the diocese.

He said, “People have been asking me about the figure of those who died. The figure that we can account for at present is 38.

“But we know that many people were taken to private hospitals. Even some people came to take the bodies of their loved ones. We are trying to trace those people so that we can have a recount for all,” he said.

Akeredolu had condemned the violent attack on the Catholic Church, describing it as a “vile and satanic attack” on armless worshippers.

Giving the breakdown of the victims, however, the commissioner for health in the state, Dr Banji Ajaka, said 18 people are on admission at the Federal Medical Centre, Owo, and at St. Louis hospital.

Ajaka further stated that about seven people were treated on an outpatient basis at St. Louis Hospital, with four of them discharged successfully.

According to him, “The total involved as of today (Tuesday) is 88, and the breakdown is this; out of the 88, we have confirmed 22 dead.

“So, there were about seven people treated on an outpatient basis at St. Louis hospital. There are 19 on admission at the same hospital.

“The dastardly act left so many dead and others injured. We have relocated to Owo since that day and the governor, Oluwarotimi Akeredolu, is coordinating us here. We are here to ensure that we track everybody involved.

“Presently, 66 worshippers survived the attack. This morning, a three-year-old child was admitted as a result of the blast. The baby was still in shock due to the sound of the explosion.”

He thanked the state governor and other stakeholders for their support since the incident happened.

“This is a very sad situation for us in Ondo State. The people of the state responded by donating blood for the victims to save their lives. The Country Representative of the World Health Organisation is also on the ground to render assistance,” he said.

The team was in the state to commiserate with the governor and the state over the terrorist attack that occurred last Sunday at St Francis Catholic Church, Owo.

Governor Akeredolu described the terror attack as a bad experience which had never happened in the South-West region.

The governor noted that contrary to rumours doing the rounds, no one was kidnapped during the incident, saying “the terrorists came to maim and kill.

As part of the measures being put in place to forestall future occurrences, Governor Akeredolu encouraged public and religious centres to install Close Circuit Cameras (CCTV) in strategic places to enhance security.

He also called on the people to be more vigilant and report strange faces in their vicinity.

The governor appreciated the WHO team for identifying with the state and the support given so far, adding that he was surprised that such a dastardly act could be carried out even in the sanctuary of God.

“Where else is safe if that sanctuary is not safe? In a war situation, even soldiers could run into the church for safety. These are mad people, I’m not too sure they are human beings. They have lost their humanity and there is no way you can regard them as human beings. I think they are animals with human skin.”

While commending the WHO team for their quick response and support, the governor further solicited more support in several areas, including social support as the situation demands.

The governor also appreciated students of the College of Health Technology, Akure, Medical and Health Officers at the Ministry of Health, Mother and Child Hospital, University of Medical Sciences Teaching Hospital (UNIMEDTH), churches, community pharmacists, Pharmaceutical Society of Nigeria, individuals and everyone who donated blood or contributed survival kits for the survivors in the hospital.

Earlier, the leader of the team, Dr Walter Mulombo, while commiserating with the governor on the sad occurrence, specifically applauded Governor Akeredolu for his quality leadership which prompted him to respond almost immediately to the situation even though he was outside the state when the attack happened.

He described the attack on worshippers including little children as unspeakable, saying WHO would offer relevant support during the difficult situation.

“The World Health Organisation is committed to supporting your state to respond to all hazards and emergencies including following up on such unfortunate incidents. I have come with my colleagues and also those working in the emergency departments, some specialists who can help in dealing with the situation, and our colleagues who will give social support,” he said.

Mulombo promised to continue to work with the government to make sure the state comes out stronger from the incident.