Politicians from the two leading parties in Sokoto State have been locked in a game of wits, which is manifesting in the spate of defections, ADENIYI OLUGBEMI writes.

by Adeniyi Olugbemi
in Feature, Politics
0 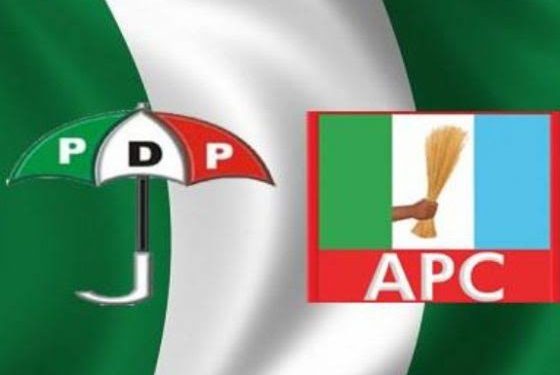 Shortly after party primaries in Sokoto State, Peoples Democratic Party (PDP) welcomed into its fold aggrieved All Progressives Congress (APC) members who lost out in the exercise. PDP celebrated as it seemed that it was coasting home and dry to victory ahead of the general election in the state.

While welcoming the decampees back home, Governor Aminu Waziri Tambuwal of Sokoto state, applauded their decision to team up with his administration in developing the state and assured them of equal treatment in the PDP.

Following their defections the APC, in Sokoto State described the decampees as political wanderers, who have failed as PDP moles but masquerading as APC members.

Reacting to their departure, APC state chairman, Hon Isa Sadiq Achida said, “We know all the defectors. They are people who have been rejected by their communities. They have no political value at state, local government, or even ward levels.

“They are bad sportsmen, who should have no place in any democratic setting. Politics is like sports, where there are always winners and losers. Unfortunately, these are selfish individuals, who are only interested in their personal comfort, rather than the welfare of the people they claim to represent.

“The defectors are made up of people who have turned their backs on those that were instrumental to bringing them into the political limelight, among whom are people who became Ministers of the Federal Republic of Nigeria, after being single-handedly nominated by Senator Wamakko the leader of the party in Sokoto State.

“Some also in the group were single-handedly sponsored into the State and National Assemblies, with many of them being returned for more than two tenures, courtesy of Senator Wamakko.”

But, recent political events in the state show a role reversal as PDP is now at the receiving end of defection blues. APC recently recorded an influx into its fold of some PDP members.

Like their APC counterparts, findings by LEADERSHIP unraveled that disagreements over the outcome of party primaries caused some PDP politicians to jump ship. This is in spite of their claims that they hinged their defection on claims that Governor Tambuwal’s administration didn’t perform to expectation and that it is riddled with maladministration and lack of trust.

Since Hon Ibrahim Gidado, a special adviser to Governor Aminu Waziri Tambuwal, opened the floodgate for serving and office holders from PDP to move into the opposition APC, the private resident of Senator Aliyu Wamakko, the APC arrow head in the state, has become a new haven for defectors into the party.

Gidado, a former member of the Sokoto State House of Assembly, who represented Sokoto South I Constituency, stated that he decided to join the APC “to team up and rescue Sokoto State from the administration of Governor Aminu Waziri Tambuwal, that has failed woefully especially in terms of fulfilling pledges to the electorate.”

On the trail of Honourable Ibrahim Gidado in the pilgrimage to Senator Wamakko’s haven is the incumbent chairman of Tangaza local government area of Sokoto State, Isa Salihu Bashar Kalanjine, alongside eight councillors of the council who defected from PDP to APC.

The two ex-councillors in the area who joined the serving eight are Abubakar Garba and Jamilu Muhammad.

Barely twenty four hours after the defection of Hon Kalanjine and the eight councillors, a serving commissioner for Careers and Security Matters in Tambuwal’s government, Colonel Garba Moyi Isa (rtd), also defected from PDP to APC.

Colonel Moyi (rtd), who was overlooked for the Sokoto PDP North East senatorial ticket further announced his resignation as member of the ruling PDP and also the State Executive Council in charge of the Ministry of Careers and Security Matters in the state.

He said, “I decided to dump PDP, as Tambuwal’s administration lacked trust and  efficient administration. I am proud to associate myself with Wamakko’s quality leadership.”

Dazed by the spate of defection from their ranks, PDP and the state government has been mum, prompting some pundits to aver that the party seems yet to recover from the shock of the exit of party stalwarts and government appointees from its fold.

To other political pundits, the cross carpeting of bigwigs and their foot soldiers across political divides is not without implications. This has no doubt forced the APC to rejig its ticket, in tandem with present realities towards reclaiming the state governorship seat.

Buttressing this, Nasiru Suleiman, a political analyst, pointed out that a cursory look indicates that much  political realignment is happening in the North Eastern flank of the state, which by its leading population may determine the political pendulum in the 2023 governorship election.

“The two leading parties, picking their deputy governorship candidates from the North East senatorial zone, clearly shows that the battle for votes will be fierce in the zone.

“As it is, APC painstakingly chose a core, grassroot politician, Hon Idris Gobir, who to his credit, is the leading politician from that axis that identifies with displaced victims of banditry attacks.

“Unlike Sagir, the scion of former governor Attahiru Dalhatu Bafarawa, who was brought to political limelight after his political baptism misfortune in the 2019 House of Representatives election, Idris Gobir, was a former chairman of Sabon Birni LGA, and lately, a special assistant to the minister of Police Affairs,” Suleiman posited.

Evidently, the spate defections would shape the way elections in the state would pan out. But which party would have the day is another matter.