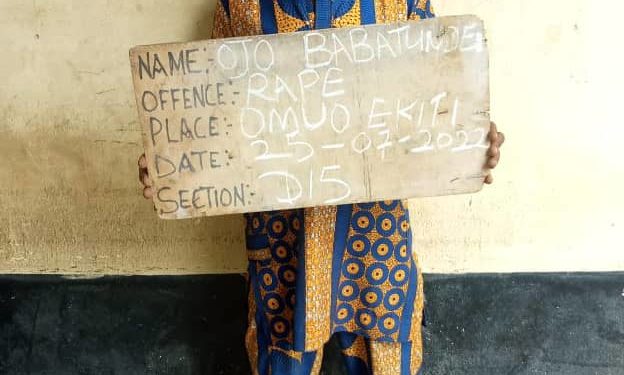 A man, identified as Ojo Babatunde, has been arrested by the Police in Ekiti State for allegedly raping and impregnating his 15-year-old step daughter (name withheld).

Babatunde was arrested in Omuo Ekiti, headquarters of Ekiti East local government area of the State.

The Ekiti State Police Command Public Relations Officer, DSP Sunday Abutu, in a statement on Wednesday, said the arrest was effected by the operatives of the Juvenile Welfare Centre (JWC) of the State CID.

The victim, who is already four-month pregnant, claimed that the suspect, had unlawful carnal knowledge of her severally before and after she became pregnant.

She explained that the man started raping her when her mother who gave birth through Caesarean Section (CS) had to be admitted to an hospital for about three weeks, leaving her and the step-father at home.

According to her, the step-father always slept with her at home whenever her mother ws not around and oftentimes lured her into the farm and defile and threaten her never to tell anyone or face the consequence.

According to the Police, the suspect, during interrogation, confessed to the commission of the crime and claimed it was the handiwork of the devil.

Abutu said the suspect will be arraigned in Court accordingly.

7 Incredible Health Benefits Of Strawberries And Why You Should Eat More... Click Here For Details
Tags: ManPolice
SendShareTweetShare
Previous Post