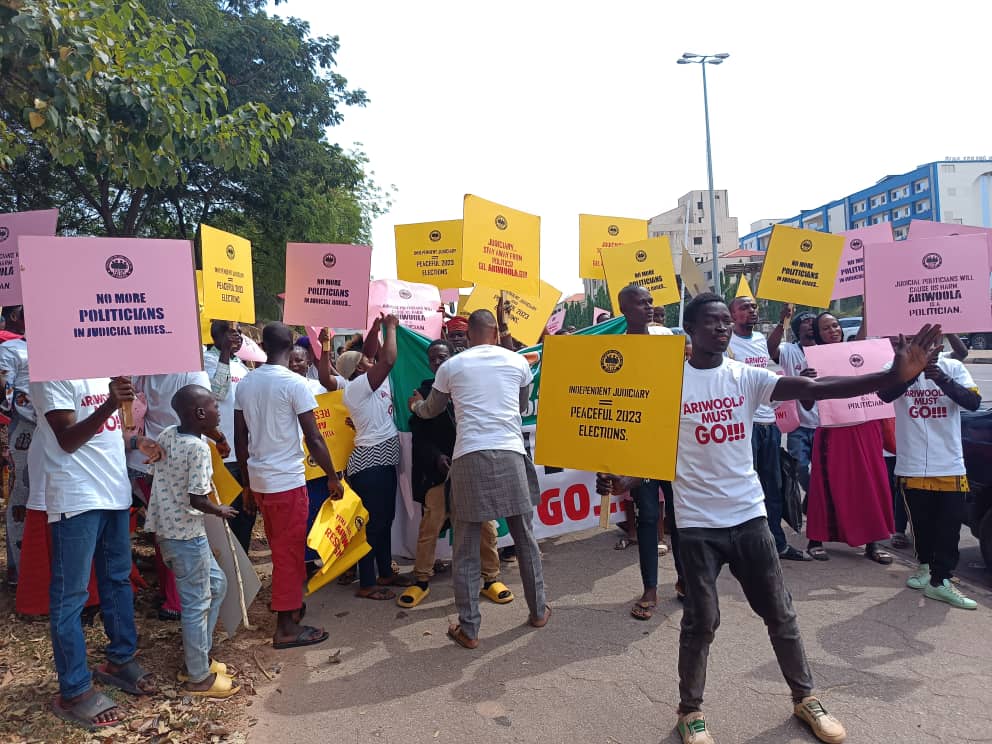 The Police in Abuja, on Tuesday, disrupted a protest organised to demand for the resignation of the Chief Justice of Nigeria (CJN), Justice Tajudeen Olukayode Ariwoola, over alleged partisanship.

The protesters, who were heading to the Supreme Court to present a protest letter, were blocked after the Ministry of Justice building in the Central Area of the Federal Capital city.

While making efforts at addressing journalists over their displeasure on the way and manner the CJN was allegedly romancing politicians, some of the policemen that stopped the protesters quickly called for reimbursement, leading to the teargassing of the protesters, who later ran helter-skelter for their lives.

The protesters later gathered at Unity Fountain, holding placards with different inscriptions, “Judiciary, stay away from politics”, “Go, Ariwoola, Go,” “Judicial politicians should not destroy our democracy,” “You are partisan, Awiwoola, resign now.”

The protesters under the auspices of the Coalition of Civil Societies of Nigeria (CCSN) said the alleged posture by the CJN portends a great danger to the smooth dispensation of justice in case of electoral dispute before, during and after the 2023 general elections.

Speaking to journalists before the interruption by policemen, the leader of the group, Comrade Olayinka Dada, called on the CJN to resign his appointment in the interest of democracy in the country.

“We are out today to save our hard fought democracy. The journey to this point despite all imperfections and challenges is no doubt one that cost great countrymen and women their lives. Many people sacrificed their time and lost lives to enthrone this democratic order in Nigeria.

“Seeing the hard fought democracy under threat as we are witnessing now is nonetheless a misnomer. Nigerians will resist this affront with all legitimacy of their convictions!

“Few days ago, Nigerians woke up to the reckless partisan interference of the Chief Justice of Nigeria, Tajudeen Olukayode Ariwoola, in a political dispute capable of making Nigerians distrust the electoral processes leading to the 2023 general elections.

“The Coalition of Civil Societies of Nigeria has since analysed his statements at the commissioning and came to the conclusion that democracy is indeed in
danger.

“How do we explain that the man saddled with the impartial role of dispensing justice is now on the side of a particular group in a political dispute? Given the fact that 18 political parties are up in the race for the 2023 general elections, we wonder what interest the CJN had in one of the political parties (PDP) leading him to obstruct the impartiality of the Judicial arm of government he currently heads.

“Nigerians are at loss as to the reasons our constitution spelt out the independence of each arm of government. It is worrisome, unpardonable and sinister for the Chief Justice of Nigeria to openly show the ugly side he is affectionately sympathetic to in a political race that has just begun.

“This portends a great danger to the smooth dispensation of justice in case of electoral dispute before, during and after the 2023 general elections. As the saying goes, he who pays the piper dictates the tune.

“From Justice Tajudeen Olukayode Ariwoola’s body language, it is becoming clearer that no party or candidate can get justice in the supreme court he oversees. Nigerians will not watch this overbearing suggestion by the CJN to rob the citizens of the good governance which they have suffered in the last eight years,” the group stated.