A fatal road accident has claimed the lives of four persons in Akure, the Ondo State capital on Wednesday.

The victims, which include a commercial driver, died on the spot.

The accident occurred at the Akure section of Olokuta/Shasha-Ondo Road on Wednesday morning. 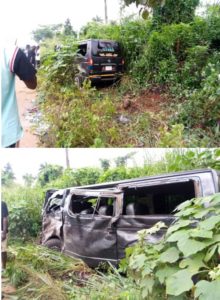 LEADERSHIP gathered that the accident occurred when a Sienna bus, coming from Ondo axis of the road had a head-on collision with an Ore-bound passenger bus along the road.

It took the intervention of motorists and residents around the area to rescue other passengers who were trapped in the two vehicles.

Men of the Federal Road Safety Corps (FRSC) later arrived the scene of the accident and removed the corpses of the victims to the mortuary.

The accident caused a gridlock on the Akure-Ondo road for several hours.