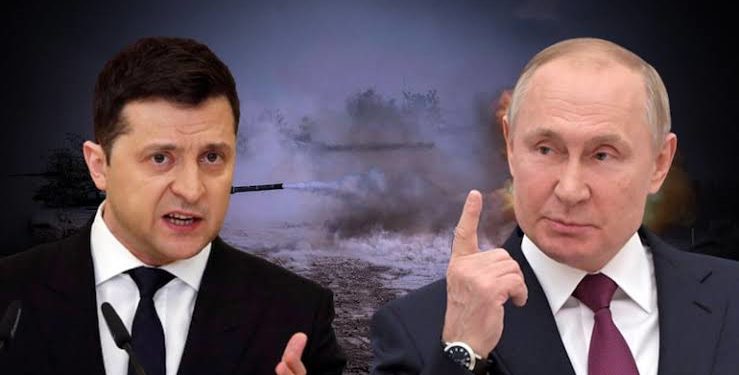 Russia must end the blockade on Ukrainian seaports in order to avert a looming food crisis in Nigeria and other developing countries, a public affairs analyst, Emesakoru Enifome, has said.

Enifome, who said this in a statement titled, ‘Russian War: Blockade of Ukrainian Ports Increases Famine in Africa’, pointed out that the Russian war against Ukraine and the consequent blockade along the coastlines of the Black and Azov seas would exacerbate Nigeria’s worsening food security situation.

He noted that Moscow’s refusal to end the aggression could drive about seven million Nigerians into the poverty hole as a result of rising food and energy costs linked to the war in Ukraine.

Enifome, therefore, called for the imposition of secondary sanctions on Russia so that Kremlin can be forced to eat the humble pie and remove the blockade to allow grain exports.

He said, “An overused strategy by Russia at war is completely destroy cities and unilaterally close the borders and also block the seaports to stifle the economy in a desperate move to achieve an undeserved victory.

“Without notice, the Putin regime blocked Ukraine’s access to the Black Sea in February, citing for military exercises.

“After many denials of any plans to invade Ukraine, more than 100,000 Russian troops crossed-over the border and launched an unprovoked and premeditated war of aggression.

“While Putin and his men remained intransigent during diplomatic talks to end the four-month-old war, a close review of the impact of the Russian aggression reveals wider issues and serious economic losses globally.

“Undeniably, the blocking of the Ukrainian seaports has exhumed an array of old, but pressing concerns, including rising energy and food costs, climate change, poverty and pandemic responses.

“One, there is evidence that the Russian president is pushing 71 million people towards poverty and famine by refusing to allow cereals to leave Ukraine via Black Sea ports. This has led to a worsening state of food insecurity and malnutrition, especially in the developing countries.

“However, Moscow has accused the West of waging economic warfare in Russia by attempting to isolate it with sanctions imposed after the February 24, invasion.

“Russia’s unprovoked aggression against Ukraine is an international conflict that concerns the whole world. In the face of the violence, no one can be neutral. No one can live safely in a world where the illegal use of force is normalised or tolerated.”

He further stated that Africa and Asian countries must know that the global food crisis was a consequence of Russia’s blockade of Ukrainian ports, but not sanctions against Moscow, as “Russian propaganda” claims.

“Undoubtedly, it is the Kremlin’s war of aggression against Ukraine that is dramatically aggravating the food crisis. The violence is shaking the commodity market and threatening global food security. It is a heavy blow to the global economy, mainly low-income African countries, and no one knows when it will end.

“However, in many quarters, there seems to be an air of resignation at the highest level of global diplomacy on how to force Putin to unblock the Ukrainian seaports in order to allow grain exports,” he added.

According to him, Western economic sanctions on Russia were supposed to force the hands of Russia to withdraw from the invasion.

He added, “Nevertheless, during a rare encounter at a G-20 foreign ministers meeting in Bali, Indonesia, recently; the US Secretary of State, Antony Blinken, blamed Russian diplomats for Putin’s role in the current global food insecurity

“Blinken went further to accuse Moscow of stealing and selling Ukrainian grains. ‘To our Russian colleagues: Ukraine is not your country. Its grain is not your grain. Why are you blocking the ports? You should let the grain out,’ he reportedly said at the meeting.

“The theft of Ukrainian cereals must stop. Russia should lift its blockade and accept the United Nation’s plan to get the grain out of Ukraine, especially as the global food shortage and the faltering economy of many countries in Africa and Asia make critical thinking on the Russia-Ukraine war imperative.

“Russia’s invasion of Ukraine, a breadbasket of the world; and the turning of all the shipping lanes of the Black Sea into a war zone, while blocking 20 million tons of grain in Ukrainian storage facilities are very serious matters that have grave consequences for the world.

“It is basically considered as a deliberate attempt by Moscow to use food as a weapon against the most vulnerable countries in the world, especially in Africa.

“According to the UN, today, 1.2 billion people – one in six of the world’s population – are subject to a ‘perfect storm’ because they are severely exposed to the combination of rising food prices, and tightening financial conditions. The international community must, therefore, act fast to address the current food crisis resulting from Russia’s blockade of the Ukrainian seaports.

“It is acknowledged that the blockade on Ukraine’s seaports has exacerbated Nigeria’s food insecurity, especially as the lean season, when market demand for food supply increases, has commenced in June, 2022.”

Enifome also explained that the reason why Nigerian households are reeling under the impact of Kremlin’ blockade of the Black Sea was because they spend a high share of their expenditures on food.

He said, “Precisely, Nigeria spends 57 per cent on food items based on 2021 data. So, the supply shortages from Ukraine will likely impact Nigeria’s demand as global prices of these commodities increase, and some food items become scarce and unaffordable for many people.

“Ukraine is one of the main wheat suppliers to Nigeria. Wheat is used in making staples like bread, semolina, noodles and pasta. The possibility of having these food items threatened in supply is worrying for Nigeria’s rising population. Currently the average price of bread is N850, compared to N500 in 2019. The story is the same for many food items.

“Nigeria’s undernourished population accounts for 28 per cent of hunger in Africa. This group of people is predominantly in the northern part of the country, where farming is the main activity and terrorism is hampering production. The implication is that hunger and poverty are expected to rise in the immediate and medium-term.

“As a consequence of the aftershocks of Russia’s war on Ukraine and rising cost of food prices, the World Bank has projected that about seven million Nigerians will sink into extreme poverty by the end of 2022.

“Therefore, unblocking Ukrainian ports and clearing the Black and Azov Sea of mines to enable export of grains is vital to global food security and economic recovery.”

He maintained that Russia must take the first step to unblock Ukrainian food exports by withdrawing its forces in the maritime waters around Ukraine and providing security guarantees against attacks on ports and commercial convoys.

“In any case of recalcitrance or grandstanding on Moscow’s side, the essential tool for deterring Russia – the sanctions policy – should be intensified in addition to the military component. It is necessary to apply the so-called secondary sanctions so that Russia cannot adjust. Hence, forced to eat the humble pie and remove the blockade of the Ukrainian seaport to allow grain exports,” the public affairs analyst added.

7 Incredible Health Benefits Of Strawberries And Why You Should Eat More... Click Here For Details
Tags: Russia
SendShareTweetShare
Previous Post