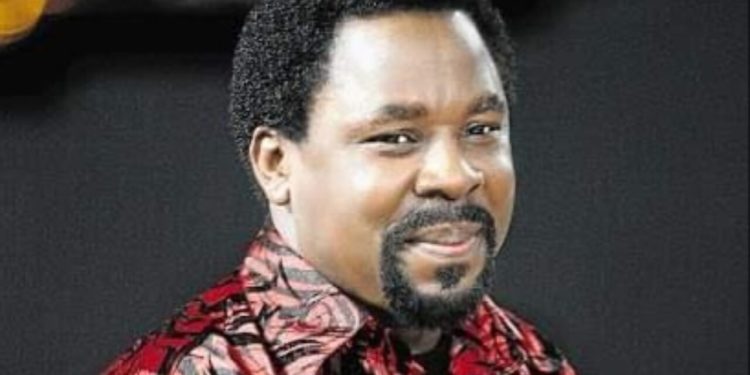 Lagos State governor, Mr. Babajide Sanwo-Olu, his Ondo State counterpart, Rotimi Akeredolu, top government officials, prominent citizens within and outside Nigeria yesterday converged on Lagos to mark the first year anniversary of the demise of the founder of the Synagogue Church of All Nations (SCOAN), Prophet Temitope Balogun Joshua.

Friends and well- wishers also showered praises and commendations on his wife, Pastor Evelyn Joshua, for sustaining the legacy of her husband one year after his demise.
The Lagos-based prophet popularly called TB Joshua died on June 5, 2021 at the age of 57.

Other prominent dignitaries at the event tagged ” Celebrating The Life And Legacy of Prophet T.B Joshua” included former presidential aspirant, Dele Momodu; deputy speaker, Cross River State, Joseph Bassey; Nollywood actor, Peter Edochie; Ronke Oshodi, fuji musician, Ayinla Kollington; chief executive officer of Atlas Oranto Petroleum, Prince Arthur Eze; member of Parliament Zimbabwe, Senator Alice Dube, delegates from Ghana, Israel and other countries.
A museum and foundation were unveiled in his memory as his widow, Pastor Evelyn Joshua, said it was the late prophet’s wish to inaugurate the projects.
Recounting memorable moments with T.B Joshua, the leader of SCOAN, Pastor Evelyn said the life of her late husband taught her patience, forgiveness while her love for him was tried as she fought for love and attention from him during his ministry.

Evelyn said, “The work of God progresses and love is tasted. I fought for love and attention and today I want to appreciate two wonderful women who became our counsellors. He brought one and I brought the other one. Because of him I became friends with elderly women, Madam Victoria Akinola and Madam Felicia of blessed memories
. I remember one Sunday, when this structure was not here, I went to his office and said to him, you are not going to attend to anybody today other than me. ” We began to dialogue and I left and he came back to me with Madam Akinola.”

While assuring members of SCOAN of a new beginning, she said, weeping is over and it is the hour of joy to continue in the legacy left by the prophet.

Meanwhile, Governor of Lagos State, Babajide Sanwo-Olu, said it still remains a shock that Prophet T.B Joshua had passed on to glory, saying his good works of charity seen today was an example of service to God.

Sanwo-Olu, who was represented by his special adviser on Religious Matters, Bukola Adeleke, thanked Pastor Evelyn Joshua and the church management for keeping the legacy of the church.

The deputy governor of Ondo State, Lucky Aiyedatiwa, who also represented Governor Rotimi Akeredolu, extended his regards to the family of TB Joshua and the entire church for keeping the legacy of the prophet.