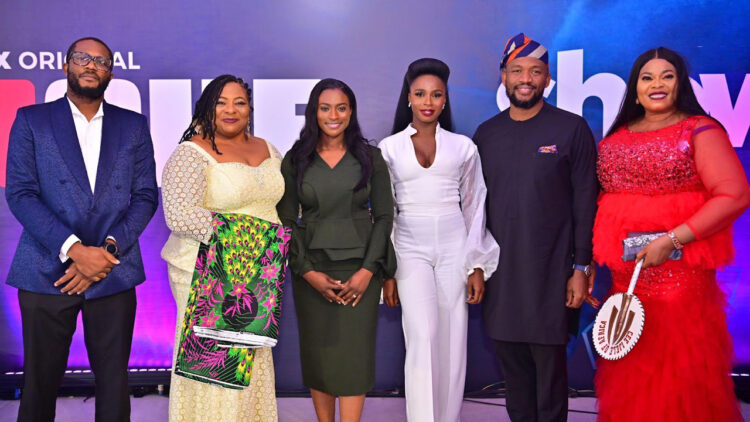 Showmax hosted an exclusive screening of its first Nigerian original limited-drama series, Diiche on September 27 at The Hall, V.I., Lagos.

The event which was hosted by popular media personality Chigul celebrated and premiered the six-part series produced and directed by James Omokwe.

Diiche is a thriller that follows the life of the titular character, Diiche. The cast members; Uzoamaka Onuoha, Chinyere Wilfred, Gloria Anozie-Young, Frank Konwea, and Uzoamaka Aniunoh were at the event. Also, the show’s directors, Fiyin Gambo, James Omokwe, and Ifeoma Chukwuogo, were present and answered a few questions during the Q&A session.

After the screening of the first episode, Executive producer James Omokwe talked about how excited he was to produce the series. He said, “I don’t want to give too much away, but there’s a particular episode entirely in Igbo, and it’s a big deal. When the opportunity to make this film came, it was exciting for us as a team.

To be honest, my real love is telling psychological stories. The first film I ever did, called The Awakening, is a thriller. It (Diiche) was like a homecoming for me, and I was very excited to produce it. However, I was anxious because it was for Showmax, and the production scale was so large, but we did it eventually.”

When asked what she expects the audience’s reaction to be, film maker, Ifeoma Chukwuogo said, “I think the audience will find the show very layered. Diiche is a beautiful blend of genres. It’s a whodunnit. It’s a psychological thriller.

There are some metaphysical, supernatural stuff, and cultural elements. So, I think as people watch the series, they’ll start to see so many layers to the storytelling. It’s obviously entertaining, exciting, and illuminating. I think people will also ask questions about themselves, certain elements of the human condition, and some cultural things. In general, I’ll say entertaining and intriguing.

Co-director Fiyin Gambo added to this, sharing what he believes people will be surprised to learn about the making of Diiche. He said, “I think what comes to mind is, ‘now you see me, now you don’t.

With the show, you think you are right and know who killed Nnamdi, but with each episode, your thinking starts changing. I think that’s what the show does to keep that suspense throughout the six episodes. It’s almost telling you, ‘don’t judge a book by the cover and don’t take things as it is’.”

Diiche follows the life of an A-list actress, who becomes a prime suspect in a high-profile murder investigation over the death of Nnamdi, her fiancé. She must take it upon herself, race against the clock to find out who killed him, and exonerate herself. However, there is more to the case than meets the eye and a backstory of almost 30 years ago that reveals the tussle between good and evil.