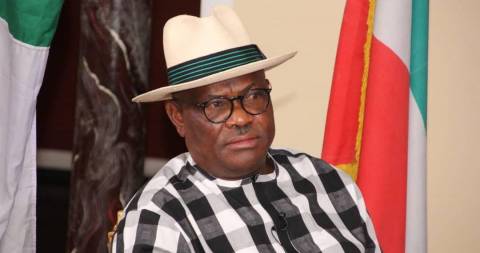 Rivers State governor, Nyesom Ezenwo Wike, has declared that some state governors of the Peoples Democratic Party (PDP) ganged up with some vested interest groups to derail the quest of Southern Nigeria to produce the next President of Nigeria in 2023.

He said it was the agreement of the governors of Southern Nigeria that the Presidency should come to the South, and he did not betray that agreement.

Wike spoke on Monday during a grand reception organised for him by the people of the state at Government House, Port Harcourt, to welcome him back from Abuja after the PDP presidential primary election.

The governor described as shameful, the inability of some of those who were part of the agreement to stick to the agreement when it mattered.

He accused them of selling out, thereby frustrating the collective efforts that would have secured the PDP presidential ticket by him for the South.

Wike said: “I contested in an election (primary) based on the principle and agreement with all Southern governors and leaders of the South that Presidency should go to the South this period.

“We have done our part. We never betrayed anybody because it is not in our blood to betray. But it is a shame to those people, some of the governors from the South, they are the people that were used to sabotage our cause.”

The governor stated that it was disheartening that some governors from the South due to their inordinate ambition could jettison the collective interest of the people they claim to represent.

He said: “Look at a region ganged up, then you, your own region cannot gang up. You became tools to be used against the interest of your people, and you think you have won, you have lost.

“You will continue to be perpetual slaves. Rivers people you don’t need to bother yourselves. PDP needs us. If they say they don’t need us, they should wait.”

Wike explained that he was propelled into the race to offer service and advance the interest of Nigeria, adding that in the process, he was confronted by a few individuals who wanted somebody they will control and he declined to be such puppet.

The governor said: “The winner (of the ticket) also saw it. They underrated us, but now, they will not underrate us again. We have all it takes to do whatever we want to do.

“This country does not belong to one particular zone. If people are afraid of talking, it is their business. I cannot be a second-class citizen in my country.

Wike stated that with the presidential primary over, and given his pledge to work for whoever emerged, Rivers State will work to deliver PDP and all its candidates in the 2023 general election.

The governor recalled that in 2019, despite failure of the candidate he supported to clinch the ticket, Rivers State gave PDP massive votes and refused to negotiate with the All Progressives Congress (APC) to give them 25 per cent votes.

He said: “In 2019, I was the only governor from the South-South who never negotiated with the present government. They came, I said no, I was not going to be party to that. And that is why APC never had 25 per cent in this state (Rivers).

“But, all the other States in the South-South, the president got 35 per cent to 40 per cent. I said I was not going to sit down with them and negotiate.”

Wike said he has even told the winner of the PDP presidential primary, Alhaji Atiku Abubakar, that most of those hanging around him do not have electoral value.

The governor stated that it would be imperative on such people from states, whether in the North or South, to deliver the kind of votes that Rivers State will deliver in the 2023 general election in order for  PDP to win the presidency.

He said it was wrong for the party to have allowed the governor of Sokoto State, Aminu Tambuwal, to speak for a second time after the time allotted to each of the aspirants to address the delegates.

In his remarks, Speaker of the Rivers State House of Assembly, Ikuinyi-Owaji Ibani, described the governor as an emancipator, who  has solved a particular nagging problem in Nigeria, that’s the issue of minority question.

Also, PDP chairman in the state,  Ambassador Desmond Akawor, commended Wike for his resilience and that the entire State and the Niger Delta were happy that he spoke for them.